Repair or Replace? What’s a Praise Team to Do? 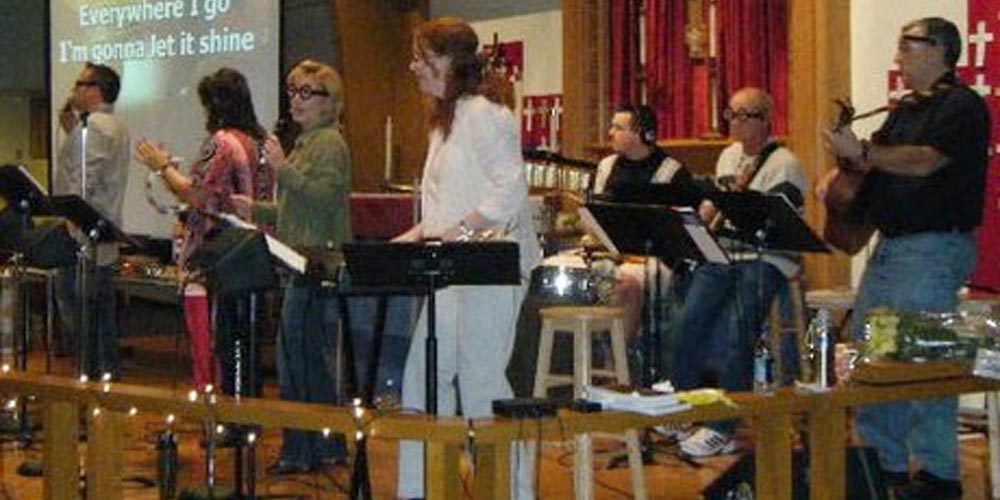 Planned obsolescence.  We're living in a world where the repair shops that were found in every town – large or small – as recently as ten or twenty years ago no longer exist.  Manufacturers of consumer products aren't eager to fill the gap, either, so most of us find it easier to replace.

The good news:  it's not true when it comes to audio gear (at least the gear that Shure makes).  Free advice is just a phone call away, often with a number of easy fixes you can make on your own.

To find out what our customers do, we talked to a couple of friends – one, audio pro extraordinaire Kent Morris and the other, Ellen Goodwin who leads the praise team at St. John Lutheran Church in Joliet, Illinois.  Occupying opposite ends of a spectrum that ranges from hundreds of congregants to thousands, their concerns – and solutions – probably look a lot like yours.

How can you be sure it's an equipment problem?

Ellen Goodwin Sometimes it's obvious, right?  Someone knocked it over and it fell apart!  On the other hand, sometimes it isn't.  My husband is an amateur sound guy.  He has designed a couple church sound systems and had built speakers when he was in college.  He taught me that you should always start problem-solving close to the problem instrument or element, eliminate variables, and then move through the sound system in a logical way.  Over time, you also get to know the quirks of your setup and know which parts are vulnerable, and therefore likely to be the culprit.

For example, one day I came in to find a ULX wireless bodypack and headset on the mixing board with a HELP sign on it.  I started with an assumption that the problem was with the mic (start closest to the problem), and not with the soundboard or sound system.  Now, is the problem with the bodypack, the headset, or the transmitter?  By exchanging the wire connecting the bodypack to the headset with the wire from my own, I discovered that the wire was bad.  I then replaced the wire with a spare that we always keep on hand, and put a note in the office to order a new one.  Since then, I've learned that the wire is the most vulnerable part of the system, especially since pastors are in a hurry after the service and don't always – OK, they NEVER - put mics away in their cases.  We replace a wire about once a year, and now we can tell when they are going bad because they crackle.

Kent Morris It is more difficult than it may first appear to determine the cause of a problem, especially in the midst of a hectic production. Typically, the quickest way to uncover the source of the issue is to ask, "What just changed?". If the operator made an adjustment just prior to the event, undo the change. However, if no adjustment was made, a more thorough investigation is required. The best approach is to start with the simple cause first and then move toward the complex. In other words, check the cable before disassembling the mixing console. For instance, if a wireless microphone loses output, the most likely cause of equipment failure is the battery, not the input channel electronics. If, however, the battery indicator shows full, look at an operational setting such as the mute switch. Then, if the mute is found to be off and signal is flowing from the transmitter to the receiver, test the cable connecting the wireless receiver to the mixer. If the cable proves to be in good working order, move on the settings on the console, checking for missed assignments or a routing error. Finally, if the signal is intact through the console, then delve into some deductive reasoning. For example, is the wireless mic the only signal not emanating from the loudspeakers? If so, the problem lies with the single signal path, not the entire audio system. Equipment does not typically simply move immediately from functional to non-functional. There is usually degradation over time. Thus, a wireless system will begin exhibiting occasional glitches before it completely ceases to work. Operator errors, on the other hand, show themselves as dramatic, abrupt changes in the sound and can often be identified by the red-faced engineer who quickly ducks out of the room.

What determines whether you'll repair it or replace it?

EG The man who headed up our sound team some time ago was an electrical engineer.  If anything broke, he absolutely loved to fix it.  He would tell me all about how he was going to order this and solder that, and his face would just light up - and I'd nod pleasantly and say "Great!" and have no idea what he was talking about.  But it was a joy and a ministry for him to repair things.  Some of the guys in our band will also take cables home to solder or make minor repairs.  It's not my skill set – repair would never be an option for me personally – but the great thing about churches is that we have people with all kinds of experience, and some of them love their tools!

Another factor is the cost of new equipment vs. ease and accessibility of repair.  A bad mic or ¼" cable – I'll just replace it – we have a lot of extras and things like that are easy to come by, with Guitar Center right across the street.  But instruments are a different story.  I've taken keyboards in for repair, because we have an electronics repair shop about ½ hour away. It might cost $125-200 to repair it compared to ten times that or more for a new one.  We've replaced drum heads on our electronic kit because they were $100-200 and we weren't sure they could be repaired.  If the equipment is in the $100 range, I know I have the budget to replace it without worrying about it.

I also consider the age and appearance of the equipment, and whether the "old" or the "new" will integrate well into the rest of the sound system or sanctuary.  For example, we decided not to replace our monitors with a wireless system, as we didn't feel it would work as well as traditional monitors in our particular situation.

If we have an expensive item to replaced that just can't be repaired, I go talk to the Memorial Committee or a friend of the music program, to see if they might want to help out.

KM Before surface-mount circuit boards and fifth-generation electronics, equipment was designed to be field repaired by a local, competent service tech. But, the advent of micro-boards, coupled with global supply chains has made it quite difficult for a tech to have the tools and parts available to repair today's electronics. While equipment continues to drop in price, labor continues to rise, making it more cost effective to replace rather than repair. Only a select number of manufacturers, such as Shure, have maintained a robust service arm to repair their products. For an item to warrant repair, it must first be of sufficient quality to serve as a fixable item as opposed to a "throw-away" design. That is, the body must be removable and the components inside arranged in such a way as to be serviceable. Shure SM series mics, for example, are made to be serviced quickly and repeatedly over many years of use. Second, the product must have an adequate lifespan to justify the stocking of parts for the item over the course of a decade. If the product is a "fad" item, there is no reason to have the parts on-hand to fix it years later. Third, the more technology-laden the item, the less likely repair is the best option. A first generation iPad, for example, should not be repaired, for the cost to do so exceeds the price of a newer model. The technology inside changes faster than the product matures. Finally, repair makes more sense only when the company behind the product is verifiable and trustworthy. It is quite frustrating to send a broken item overseas for repair and discover after a month or more the item was not fixed properly. Shure keeps its service facility in the USA and offers tracking and status information on their repairs.

How do you prevent a minor issue with a piece of gear from becoming a major problem?

KM One of the best lessons to learn in live production is to never have a single point for failure. This edict means that wireless mic systems have a reliable wired mic on a stand as a back-up in case the wireless experiences an issue. The talent is instructed to grab the wired mic as soon as audio is lost. This process minimizes distractions and is a cost-effective solution. Always be ready to bypass the problem. If, for instance, a power amplifier goes out, have a plan in place to connect the minimum number of cabinets needed to a stand-by amplifier in the rack. If an equalizer goes down, using XLR cables for in and out allows the unit to be bypassed physically through the mating male and female connectors on the XLR termination. A corollary rule is to keep things as simple as possible since complexity breeds problems. If a pair of mics, such as KSM32s, can cover the choir, the chances of a bad cable are cut in half versus a quartet of hanging mics. Though the temptation to add features and functions is strong, it can be countermanded by the knowledge that "simple always wins".

ELLEN GOODWIN is a singer, pianist, teacher, and church musician. As the Music Director at St. John Lutheran Church in Joliet, IL, she leads the Youth Choirs and the Praise Team. A voice teacher for 17 years, she is currently an Adjunct Professor at Joliet Junior College, and maintains a private studio in Minooka, IL. She believes that music is essential to a full and happy life, and especially enjoys helping young people acquire the skills they need to become lifelong musicians.

KENT MORRIS has been engaged in the technical arts within the church for more than 30 years. From FOH mixing duties on tours through system and product design to user training, Kent has focused on ensuring clear delivery of the Message.  Kent has managed a commercial recording studio, a pro audio shop, a speaker manufacturing facility and a production house. He was blessed to be a part of the Maranatha! WLW and Integrity teams which led to training stints with NAMM, InfoCOMM, LDI, AES, NSCA and NAB trade organizations. As a former pastor, he has a heart for the struggles of ministry and seeks to counsel churches in need of technical support.