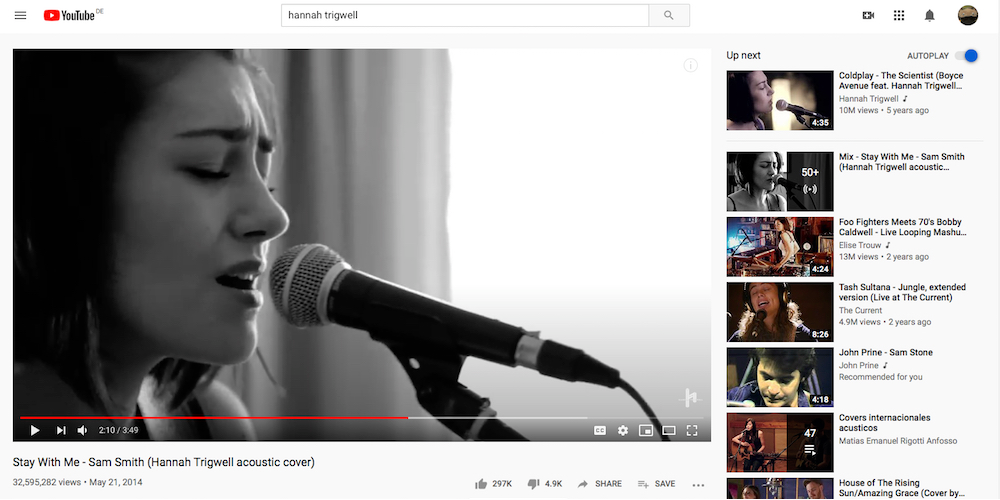 Having a vlog is a great way for musicians to build a following and connect to fans. The singer-songwriter HANNAH TRIGWELL offers a useful YouTube primer.

Getting your music “out there” is something I heard a lot about when I was first starting out as an artist. At the time, there wasn’t an obvious way to do this and local promoters in Leeds weren’t eager to offer me a gig and, to be honest, I understood why. I had no fans, so how could I fill a venue?

So I began busking at the age of 18, playing the streets of my hometown to grow my audience. This literally got my music “out there” and gradually I became better known. I started to gig locally, pulling in good-sized crowds and finally making those promoters happy.

Of course, these days touring and performing have all been put on hold. Fortunately, there is still another great way to connect to music fans out there: a vlog on YouTube. The video platform was still in its infancy when I stumbled across it. But I was encouraged to see people of all nationalities commenting on videos of live music performances. I was so excited. I had found it! A way to further grow my audience around the world.

Roll on eight years and my YouTube channel now has an audience of over 500,000 subscribers notching up more than 120 million views. My success online has helped me tour nationally and internationally numerous times, as well as achieve two #1 original singles in South East Asia. It also helps explain why my self-released debut album RED went straight to #4 in Malaysia.

My other top ten international singles are delicate acoustic covers of popular songs, which is what I was posting on YouTube for years before pursuing a career as a songwriter and original artist. Though I have posted lots of content I am really proud of, I have also made my share of mistakes along the way. Here are a few important things I have learned on my journey as a musician vlogger.

It can be a challenge to stay strong and veer away from popular topics or trends (i.e. the videos that get the most views). But if you really want to have some longevity on YouTube (or any other social media platform for that matter) post what YOU want to post. Pandering to anything that doesn’t feel like "you" is sure to be a mistake and people will see straight through it. Yes, a one-off video may bring you views in the short-term, but the viewers brought in by it will be after more of the same type of content. You might soon find yourself struggling to find the motivation to create stuff you don’t really believe in. And it should be fun! So do what you love, and post what you want (but try to be consistent).

Timing Is Everything (Part 1)

My most popular video to date Stay With Me - Sam Smith (Hannah Trigwell acoustic cover) is a great case study for good timing. I had heard this song premiere on BBC Radio 1 a week before it was due to be released. It sounded like a modern classic, so I got into the studio, recorded an acoustic (with a tapping twist) stripped back version and posted it on YouTube. For five whole days, whenever someone searched “Stay With Me Sam Smith” to get a first listen to the upcoming single, my video wasn’t just one of the highest in the search results, it was the ONLY 100-percent relevant search result. The video garnered one million views in a week and is now just under 30 million views. I’d like to think that was down to the video being shot and edited well, and that the performance was good…but a big factor in its success was the timing.

Timing Is Everything (Part 2)

Timing is important not just in terms of being current. For years, I worked my musical days like a 9-to-5 job, so that I could have some kind of social life. This way of working meant that I was posting videos every week, on the same day, at the same time – nice and consistent. My viewers knew what they were getting and when they were getting it. Great, right?

However, from the perspective of growing an audience to be able to tour…I messed up. I was posting videos at 2pm UK time every day – the perfect time to reach people in South East Asia! My viewers there had just got back from work or school, eaten their dinner and were ready to relax by consuming some music on YouTube. I now have quite a big audience in South East Asia as a result of this. I can’t complain though. The fans out there are amazing. However, as an artist based in the UK, having a huge audience IN THE UK would be much more convenient for touring!

I have since started changing the time I post videos now, geared slightly more towards my British audience. Though this means my UK audience is growing, I have taken a bit of a hit in terms of views overall. It’s something to think about for artists who want to grow a fanbase in a certain area of the world!

Invest in Your Community

I don’t mean give every fan £5. I don’t even mean sponsor each of your social media posts. I’m talking about giving a bit of your time and energy to your viewers. Replying to comments. Communicating. It is called social media after all. It’s easy to forget that a comment on a video is a message that an actual human being has spent the time to type out and hit send. They are engaging with you. Nurturing that relationship is crucial for maintaining and growing your audience. I try to reply to as many people as possible – it is difficult, but just trying is a good start.

Because if you invest emotionally in your online audience, the love will be returned. And that is what it’s all about after all: I make music to connect with people, so I believe investing in my listeners is crucial to the experience – on both side of the screen.

For more tips, check out Hannah's YouTube channel here and listen to her episode of the Signal Path podcast below.