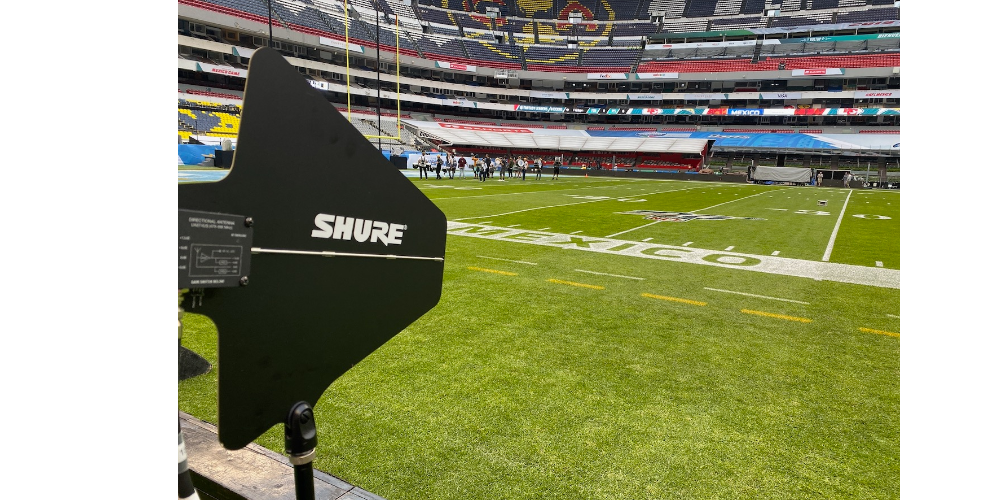 MEXICO CITY, MEXICO, November 26, 2019 – The NFL’s On Location games in global cities like London and Mexico City are excellent opportunities to widen the visibility of pro football, but it also presents some unique challenges for audio professionals in setting up broadcast-quality coverage.

There are many behind-the-scenes professionals who work hard to ensure these games meet high broadcast standards. For example, wireless audio for referee mics, national anthem performers, halftime entertainment and sideline reporters rely on a dedicated wireless “channel”. At Estadio Azteca, the stadium in Mexico City, the spectrum is not as prevalent as stadiums in the U.S.

“It can be a struggle to find ‘clean air’ to provide clear audio,” said Andrew Hall, the audio engineer managing elements of the Mexico City game broadcast for IHS Productions.

To help overcome those issues, Hall used Shure Axient® Digital with Quadversity. It allowed him to use four antennas and Axient Digital is able to use the best antenna. This is twice the antenna capacity from typical systems. It also allowed him to place four antennas on the sideline to minimize the distance between an antenna and a referee -- no matter where the game official was located on the field.

Hall set up Axient Digital’s Interference Avoidance feature set by pairing the receiver with the AXT600 Spectrum Manager and three AD610 ShowLink Access Points. This allowed programming an inventory of frequencies into the spectrum manager which continuously checked the frequencies and ranked them from best to worst. If one frequency became an issue, Hall used the audio from the other belt pack and the Axient Digital system sent a new frequency over ShowLink to the belt-pack while the ref was still using the mic.

Hall brought in an additional onsite audio mixer system to help manage the audio for the game.