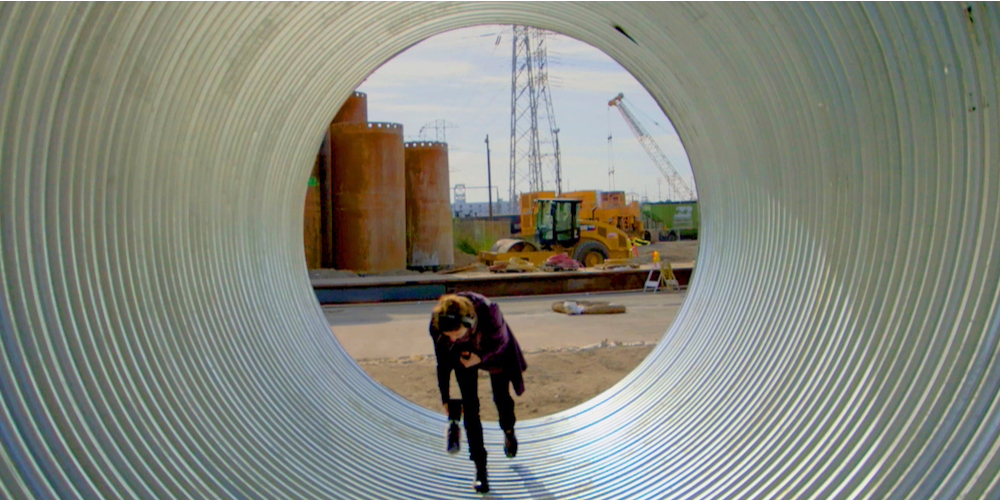 Few artists are so devoted to field recording as KATIE GATELY. Tracking down and capturing unique sounds is a crucial part of her music-making process.

Katie Gately doesn’t make music in Los Angeles – she harvests it from the city’s rich soundscapes.

Always fascinated by sonic exploration, she was an avid field recorder long before she became an experimental musician.

“I started recording sounds years before I started making music,” Gately remembers. “I lived in a very old building and the heater was clunking, so I decided to record this unusual sound… as soon as I started doing that I was hooked.”

Ever since the French audio pioneer Pierre Schaeffer created his musique concrete compositions back in the 1940s, musicians have used field recordings to bring the outside world into the studio. But few have made it such an integral part of their creative process as has American composer Gately.

A metal pipe on a building site, the echoes of an underground passage, or even the fizzing hum of a desktop scanner – all of these provide material for Gately’s imaginary orchestras. While walking through the streets of LA, she bangs on windows, rattles railings and rolls stones down metal sheets, recording each new noise as she goes.

From Sounds to Songs

It was only after studying sound design at the University of Southern California did Gately realize her aural archive could be turned into songs. “When I started making my own music I found that all these recordings finally had a purpose,” she explains. “They are very unique and come from my personal life: my wanderings through the world.”

Now, some six years since her first release, Gately is these days an established name in experimental music. As well as a string of critically acclaimed releases – including her 2016 album Color – she’s also in demand as a collaborator, remixing a track for Icelandic innovator Björk and working on a song for indie favorite Zola Jesus.

Though her profile has increased over the years, the core of her creative process remains largely unchanged.

“I start by creating loops, trying different effects,” says Gately. “That could be the sound of my oven, for example. I’ll loop it and add delay until it becomes more like an agonized scream. Or chop it up so it sounds like someone speaking. I often try to take that sounds that aren’t human and make them speak, give them a voice.”

All this might sound like her compositions are chaotic noisescapes, the sort you’d find in a Scandinavian horror film. However, Gately’s real talent is being able to deftly turn these strange sounds into imminently accessible songs.

“I want to make music that takes traditional melody and puts that against unusual sounds and percussive effects,” she explains. “Sometimes that is asking a lot of the listener… but it turns a song into something multi-dimensional, something that is true to life. And for me that’s the most important thing.”

To be sure, it’s the dense layering of her compositions that ultimately makes them more satisfying; they are a home-cooked meal to a microwaved dinner of a pop song.

“I think it’s fun to play with sounds that don’t have a direct definition, unlike traditional instruments,” she muses. “When you use the sound of a pipe squealing in the walls you’re not forcing the listener to have a certain reaction.”

This means people are free to make up their own minds: It could cause a creepy reaction, or it could remind them of their mom’s old house and be comforting.

“For example, I have a gate that makes a jolting rattle when it shuts. Recently someone came in through the gate and asked: ‘What was that?’ It surprised them. I suddenly realized that this sound is really dramatic and interesting. Sometimes the most exciting sounds are right in front of you – you don’t have to go far to find them.”

So how does Gately decide which sounds to record? “It depends,” she answers. “Sometimes the fun challenge is to take a sound that is not very interesting and try to push it to see if it can be exciting, by splitting its frequencies or adding unusual panning effects. I love giving mundane objects as much power as possible.”

But even for a seasoned sound harvester like Gately, not every recording expedition is a success.

“I’m always wrong [when] I go on a trip and I think … there will be great sounds,” she admits. “But a place that is visually exciting can often be sonically average, whereas some boring old house might not be great to look at, but the sounds could be really cool.”

This article originally appeared in LOUDER Music Makers Edition and was based on this video documentary by Ableton. Find Katie Gately’s Instrument Rack download for Ableton Live here.

Be sure to check out the MV88 and MV88+ for your field recording needs.