How to Record & Mix Acoustic Guitars 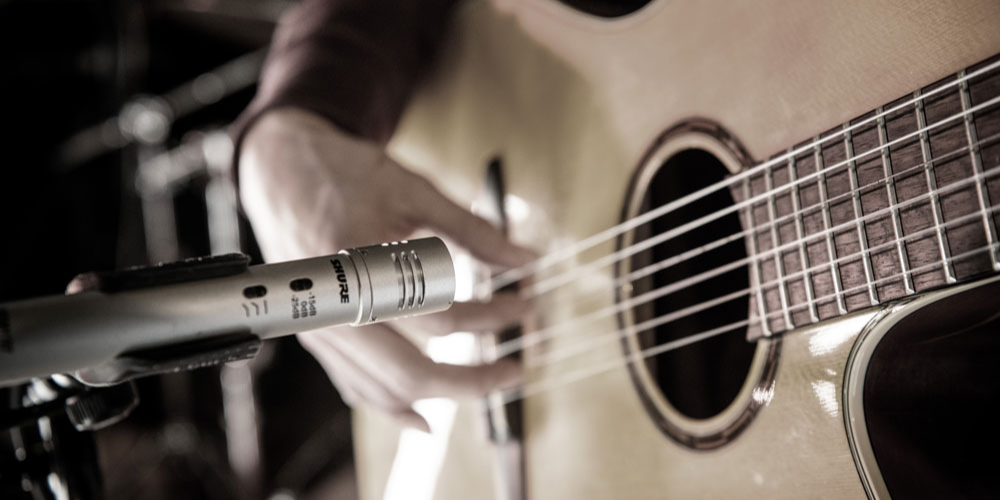 Reproducing the sound of an acoustic guitar presents a different set of challenges to that of an electric guitar. When we look at recording electric guitars, the focus is on capturing great tone from your amplifier. With acoustic guitars, the focus is switched more directly to the instrument itself, and in doing so we open up a new world of considerations for the final recording.

If you own an acoustic guitar with a built in pick-up system, such as a piezo, it can be tempting just to plug into your audio interface and go. However, while pick-up systems help to reduce the chance of feedback on stage, it's important to remember that every part of the instrument is producing a different sound. From the soundboard and sound hole, to the sound of fingers on strings, there is more to a great guitar tone than you might immediately think. Subsequently, a pick-up system will only capture a small element of the bigger picture; only a microphone can capture the true diversity an acoustic instrument and the room it's in.

In this article, we'll show you how to get the best sound possible from your instrument and provide you with a few tips for mixing within the context of your recording.

Before we consider how to capture an acoustic guitar, we need to get some basics in order first. I've said it before, and I'll say it again, the sound source (your instrument) comes first. Invest some time in making sure your instrument is in the best shape possible. Change your strings before you even contemplate pressing record and consider asking a professional about setting up your instrument for the best results.

A setup should include looking at your guitars intonation and setting up the action. On an acoustic guitar, this process involves adjustments to your instruments truss rod, nut, and bridge. Although you can make some adjustments yourself, more thorough and severe adjustments should be looked at by a professional. Our advice - make a judgement on how your guitar sounds and plays after changing your strings; if you need to make adjustments outside your comfort zone, it's best to seek professional advice first.

Alternatively, if you don't think the guitar is up to the job, consider renting or borrowing a better model. It is basically impossible to correct a poor sound source once recorded. Any attempt to bodge an acceptable result through remedial EQ or pitch correction will be time-consuming, and ultimately, unsatisfactory.

With the guitar now in great shape, we can begin to consider microphones. As a general rule of thumb, a dynamic microphone will rarely do the acoustic guitar any justice. Acoustic guitars are inherently rich in high frequencies, and, for this reason, selecting a good quality condenser microphone will likely yield a more satisfactory result.

In simple terms, smaller diaphragms have less inertia and can subsequently react more to high-frequency transients. For this reason, small diaphragm condenser microphones are a great choice if you want to capture a crisp, detailed acoustic guitar sound. However, this does not mean you can't achieve good results with a large diaphragm condenser; in fact, because a large diaphragm has more mass, the result is often described as sounding more 'warm'. If this is your thing, go ahead and use the large diaphragm. If you have an acoustic guitar that is too bright, it could even help tame it.

Depending on how advanced/expensive your microphone is, you may have the option to switch polar pattern. The most common options on a condenser microphone are cardioid or omni pickup patterns. In a nutshell, an omnidirectional polar pattern will sound more natural or transparent than a cardioid, but it will typically pick up more of the room sound. If the acoustics in your studio are less than ideal, or you're recording in a small room, a cardioid will help you achieve a better result.

Understanding some of the fundamentals of the instrument will help you to make informed decisions on where best to place your microphone(s). For example, the low frequencies are strongest at the soundhole itself. For this reason, it makes little sense to capture the sound from here if you want to achieve a balanced sounding result. Depending on musical style and preference, a more desirable result can be achieved using the following techniques featuring a Shure KSM141:

Place the Microphone at the Bridge

The sound of an acoustic guitar is most balanced at the bridge. Depending on how the guitar player is performing you might find that the microphone gets in the way of their arm. In this case, consider placing the mic slightly below the bridge and angled upwards. Alternatively, you could consider raising the microphone above the bridge near the guitarist's shoulder and aiming downward. Either way, your microphone should typically be between 20 and 30 cm away from the instrument. If you're using a cardioid mic, moving it closer will increase the amount of bass frequencies picked up. This is due a phenomenon known as the proximity effect.

Placing the Microphone Between the Neck and the Sound Hole

If you're looking to achieve a brighter, more percussive result, placing your microphone between the 13th and 19th frets will bring the strings through more prominently. You can easily vary the amount of bass response by directing the microphone closer or further away from the soundhole.

For the best of both worlds, or even just to keep your options open, it's worth considering a microphone in both positions described above. When the two mics are blended together at different volumes, it is possible to arrive at a much wider range of tones. You can think of this as balancing the brighter tones from the neck, with the warmer tones coming from the guitars body. Depending on musical style and taste, a blend of both sounds can work well.

If you do decide to use 2 mics, make sure the signals are in time with each other. If they're out of sync, this can cause phase problems or comb-filtering. You can minimize potential phase problems by ensuring each mic is at an equal distance from the soundhole. However, to keep your mic position options more open, it can be better to adjust the timing manually within your recording software through manual adjustment or by flipping the phase on one channel. As a general rule of thumb, if your microphones sound better in isolation, you could have a phase problem that needs investigating.

Whichever microphone or technique you decide to use, remember that you're attempting to capture the overall sound of the guitar; the bigger picture if you like. Generally speaking, moving the mic closer will produce a drier sound, while moving it further away will introduce more room ambiance. If the microphone is too close, you risk getting an unnatural tone that only reflects one element of the instrument. Try experimenting with distance and position using some closed back headphones to monitor the result. Getting it right at this stage could save you hours of hassle during your mix.

By this point in the game, the overall sound of an acoustic guitar is basically defined. You should now be aiming to tweak the recording to sit within the context of your entire mix. Less is more in this circumstance, and the following are some typical examples.

If the acoustic guitar forms the primary rhythmic and tonal structure of your track, small amounts of compression will help it gel with the rest of your mix.

Set the ratio between 3:1 and 8:1 and then adjust the threshold to catch only the louder peaks (somewhere around -6.0dB should do it). Then, apply a fast attack to blend into the mix or a slower attack to highlight the attack of the pick. Adjust the release time to a fast setting to control transients or to a long release for more overall gain control. Below is an example from Logic Pro.

The most common approach to EQ for an acoustic guitar is to start with the low frequencies. Most low-frequency content on an acoustic guitar will only clash with lower pitched instruments such as the bass or kick drum, for this reason, it makes sense to reduce it quite a bit. Try rolling off some of the bass using a shelving equaliser starting around 80 or 100 Hz.

Once you're happy with the low frequency balance, you can remove unwanted resonances using peak filters. Try searching around 100 - 250Hz and reduce it just enough to tame the offending frequency.

Last but not least, you can help the guitar stand out in your mix by creating a slight boost at around 3 - 7 KHz. This is where most of the clarity and presence of an acoustic guitar is located. Below is a typical example using Logic Pro.

Unless your recording space has great sounding acoustics, it's common practice to capture a very limited amount of natural room ambiance. Room acoustics is a whole other science in its own right, but typically a combination of savvy microphone technique and acoustic panels are used tame the room and produce a relatively 'dry' recording. It's much easier to add reverb to a dry sound than it is to fix a recording with poor acoustics. Plus, by recording in a less lively sounding room, it allows you to pull the microphones further away from the guitar, resulting in a more holistic sound, but remaining quite dry.

When adding reverberation back into your recording, you're typically aiming to give the impression that everything was recorded together in the same space. Through this process, you also need to consider the placement of each instrument. For example, do you want the listener to feel like the instrument is close up or further back within your selected space? You can easily achieve the impression of depth by varying the balance between direct sound and the reverb. To achieve a close intimate sound, make sure that the direct sound is strong and the reverb is faint. Flip this rule on its head if you want to give the impression your instrument is further away.

Most modern recording software, such as Logic, Pro Tools, or Cubase feature great reverb plug-ins right out of the box with impressive presets covering a wide variety of spaces. It's best to keep the amount of spaces used for any given recording to a minimum as combining multiple reverb emulations can create a confused sound. However, some instruments can benefit from adding additional effect reverbs, such as a plate, in order to make a feature of that particular instrument (snares are a good example). When it comes to your acoustic guitar, the best approach is to use reverb for space and width. If you want to get creative, try adding a little delay, with the dry sound panned to one side, and the effect on the other. Adjust the delay accordingly until you achieve a wider sounding acoustic guitar without there being an obvious effect.

Recording a decent acoustic guitar tone is actually quite simple. Getting a great tone requires time and patience. By following the advice in this post, you'll have a great base from which to start discovering what works for you. As a top priority, I'd advise getting the source right first. If you put the leg work in when selecting and setting up your guitar, and you listen carefully when positioning the mic(s), the mixing process should be a cinch.