DIY Guitar: Building Your Own Six-String 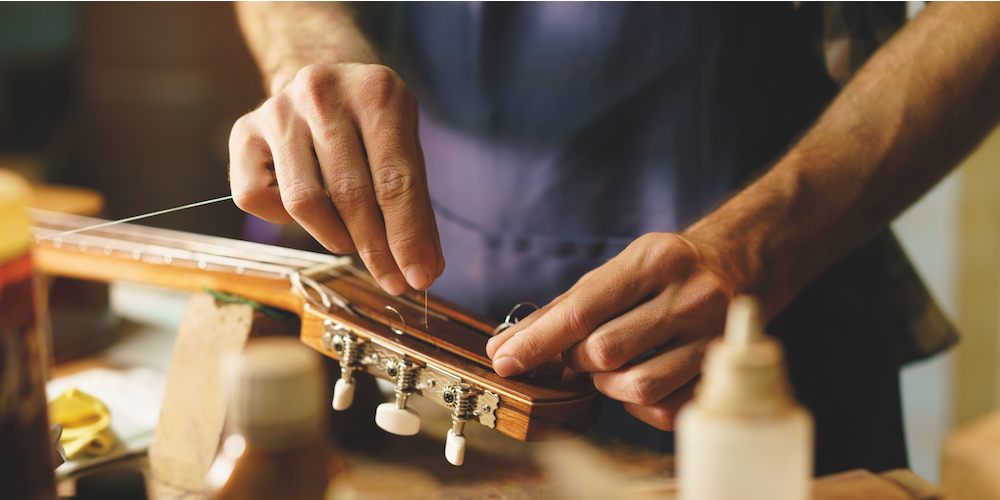 Think you know your guitar? Try making one! Whether you’re hoping to become the next Stradivarius or simply craft a custom Stratocaster, building a guitar can teach you a lot about your instrument.

Most guitar makers will never get a phone call from Jack White demanding an aluminium ukulele in under a week. But Ian Schneller isn’t your typical luthier, as a maker of stringed instruments is properly called.

Armed with a master’s degree in sculpture, Schneller started creating flamboyant instruments for his art-rock indie band Shrimp Boat in Chicago in the mid-1980s. Now, decades later, he’s the go-to guy for discerning musicians like the frontman of The White Stripes, Dead Weather and The Raconteurs.

“It was amazing. He just called up said he needed it in like four days for an appearance on the Conan O’Brien show,” Schneller recalls. “In that case, you do what it takes to get it done.”

Though he never set out to become a luthier, Schneller feels his self-taught approach has given him a unique perspective that has served him well over the years.

“The criterion for string instruments is very strict. The physics of it. But there’s still a wide-open palette for creativity. That framework is what’s so appealing to me,” he says.

Initially, he relied on Don Teeter’s two-volume set The Acoustic Guitar and Hideo Kamimoto’s Complete Guitar Repair for the knowledge he lacked and learnt as he went along. Over the decades, Schneller’s made everything from exotic electrified lutes to custom amplifiers under his Specimen brand. He eventually decided to set up the Chicago School of Guitar Making amid growing interest from people eager to turn a hunk of wood into a fully functioning six string.

“My school was an inevitable thing. There were so many people asking if they could intern here. It was a no brainer. I get kids fresh out of high school who have never touched a screwdriver or hammer before,” he explains. “A lot are ageing professionals. Lawyers and dentists returning to their rock ‘n’ roll roots. Middle-aged semi-pro musicians wanting to get closer to their instruments.”

Making guitars at the highest level like Schneller is an art. It’s not something you should expect to do on your next free afternoon. But tinkering around on your own or as part of a class can undoubtedly give you a better understanding of how a guitar really works – and that, in turn, can make you a better guitarist.

Case in point: Did you know a flamenco guitar has a lighter top than a regular classical guitar for a more percussive sound? Or the importance of wood – whereas maple will give your electric a brighter tone (and added weight), mahogany will provide warmth.

Schneller also has some clear advice for prospective luthiers regarding the tone of modern guitars: “The biggest ruse is the adjustable truss rod,” he says, explaining how the mass-produced guitar industry has sacrificed tone for expediency. “It’s like drinking your first glass of top-shelf wine – once musicians hear the sonic differences they’re blown away.”

Beyond the educational aspects, nobody is going to make you guitar like you’d make one yourself. At least that’s the line of thinking prodding Matt Beels to delve deeper into lutherie this year after learning the basics in years ago in Calgary, Canada.

Beels certainly knows guitars. He has everything from an old nylon string model being refurbished for a child’s first lesson to a battle-hardened Gibson Flying V belonging to a heavy metal fan at his Guitar Wars repair shop, which is located in a quiet side street in Berlin, Germany.

“There’s always something I don’t like about stock guitars,” he says, grabbing the Flying V and pointing out how he prefers the cut of the original 1958 model near the base of the neck compared to later models.

With the radio blaring and old Kiss posters from Japan on the wall, he quickly restrings an acoustic while discussing the virtues of reverse headstocks, which he considers easier to use.

“See how my hand just reaches up there,” he says touching the tuning pegs from below the neck. “It’s just more comfortable. Plus it looks absolutely bitchin’.”

For Beels, guitar building is all about making an ideal axe for himself – and his three kids. Showing off the body templates for a “Tinycaster” model he ordered from The Netherlands, he quickly details his plans to create a hybrid child/travel guitar.

“You’ve got to have a normal scale neck or the kids will grow out of it and you’ll never be able to play it,” he explains. “But you’ve also got to get the weighting just right. The neck can’t be too heavy for the smaller body.”

It’s that kind of customization and attention to detail that DIY guitar building is all about. And, of course, once you’ve become a full-fledged luthier, you can start thinking about your telephone and when Jack White is going to ring it.

You can, of course, simply pay someone a lot of money to build the perfect axe for you. But that’s clearly not the point of DIY guitar building. Musicians looking to make their own guitars are often interested in exploring the underlying tone and mechanics of their instrument rather than having a six-string trophy on their wall.

No matter if you’re interested in building an electric or acoustic, attending a workshop offered by your local luthier is undoubtedly the best introduction to guitar making. Normally offered over a weekend or several weekends, these workshops typically include access to all the necessary materials and tools. But this means they can also be fairly pricey for some people.

If you don’t have the time or cash to learn directly from a pro, you might want to consider subscribing to an online class or just order some how-to books. But before you splash out your hard-earned cash, ask yourself if the luthier is an expert in the style of guitar your want to make. There’s no point in reading up on pickups and soldering wiring if you only want to make a classical acoustic. But unless you already have an ultimate set of tools, you’ll still need to think about finding a nearby woodworking shop.

The easiest guitar-building option is to buy a pre-fab kit ready for assembly. These come with all the pieces already cut, so all you have to do is bolt it together, install the electronics, slather on your finish and voilà! You’ve got, erm, well, a crappy kit guitar. Still, if you don’t have access to templates and woodworking tools, this could be your best bet for your first guitar-making attempt to see if you’re willing to invest more time and money building another one from scratch.