Behind the Scenes of CMT’s Nashville with Danny Rowe 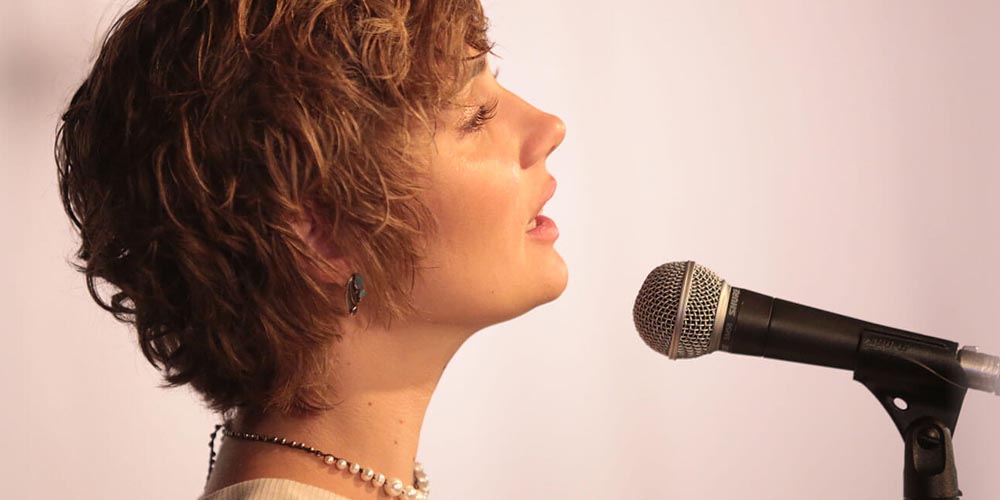 It's open mic night at The Bluebird Café in Nashville. Regulars are crowded into the storefront venue, along with friends and family members there to support one of the 25 songwriters on tonight's bill. Erika, who runs the place, is there, too, like almost every night. Candles flicker on the tables that ring the in-the-round performance space. A few patrons lean with their backs to the bar, waiting for the lights to dim.

But wait a second. There are lights beyond the lights. And an entire film crew. This Bluebird Café doesn't even have a ceiling. And it's not in a strip mall past Green Hills on the Hillsboro Pike. It's a replica built inside a sound stage in Music City, where production on the sixth season of the cable TV show Nashville is in full swing. The Jack Daniels Old Number 7 in the glasses might be an imposter, but the music is still the real deal.

One of the people helping create this magic is Danny Rowe, who began his career as an extra back in 1994 for the post-apocalyptic $175-million sci-fi action film Waterworld. For a native Californian who grew up playing music in Santa Barbara, a chance encounter on set with the property crew sparked a lasting career. "Working on a really fun project, making a bunch of money and using it to go to concerts and buy a lot of music gear … that was the plan to pursue my dream," he said.

Between film projects, Danny played with bands around LA (including New Wave band The Motels). But fate intervened in 2011, when he was hired as a property craftsperson for the TBS comedy drama The Wedding Band. "In every show they would do wedding or banquet parties – various themes – so it was running and gunning," he explained. Danny had an advantage that the other prop pros lacked – experience as a gigging musician. "If there was a scene with actors dancing in a ballroom, there'd be some musical gear in the background. I'd always try and sneak away and reset the rack toms correctly or put the hi-hats on the snare side instead of the floor tom. That kind of thing made me crazy," he said. The series was cancelled after just 10 episodes, but a new opportunity was waiting in the wings – an ABC series about the travails of country musicians, including the competition between a reigning queen and a youthful upstart, in Nashville. It was, he said, "another opportunity to fuse my two passions."

Hired as audio property master, Rowe knew the 13-episode commitment meant a move to Nashville where the series was going to be filmed. "I was more than happy to join the crew when I saw who was involved. T-Bone Burnett was the musical director, and he cast a mighty big shadow. Buddy Miller was a part of Season 1 as well," he said. "I knew my way around a movie set since I'd worked for 20 years on some really great projects. But coming aboard a show in Music City with Buddy and T-Bone at the helm was reassuring and daunting at the same time." (Tim Lauer is the show's current music producer.)

Then, as now, the show's producers were sticklers for authenticity – one reason Nashville, currently in its fifth season on the cable channel CMT, is shot in Tennessee. Danny explained: "Buddy felt that the musical equipment on the show is as much a character as the actors are." Every episode includes at least three pre-recorded songs that Danny needs to stage. "If it's a Fender Telecaster, a Gibson small body or a Martin, that's what you'll see that actor playing. I really try to stick to the brands that tell the tale," he explained. The same goes for microphones. "One of our jobs is making sure that the actors are comfortable with whatever props they're using," he said. Cast members regularly gig around town "anywhere from some of the smaller clubs to the Grand Ole Opry and Ryman Auditorium. Shure mics are embedded here in Nashville – that's another reason you'll see them on the show. Having that comfort level is really a wonderful thing."

Visit Nashville and you're likely to see crews filming in Music City's fabled Lower Broadway where live music spills out of the many clubs clustered in the shadow of the Ryman Auditorium. Other scenes are shot in a soundstage across town where, in addition to other interiors, there are sets for The Beverly, a fictitious dive bar that figured prominently in Season 4 and The Bluebird Café replica. Once again, authenticity reigns supreme.

"In the Bluebird set, we use SM58s. We used KSM8s in The Beverly, which we introduced right in step with Shure's introduction, which was kind of cool," Danny said. "We even used a prototype of a MOTIV MV51 mic when we needed a USB mic for a scene where Juliette Barnes (Hayden Panettiere) was going over some tracks in her house." That attention to detail is typical of many scenes in Nashville. But some production secrets are more surprising: "Even though their vocals are pre-recorded, the actors sing along with the playback during filming. We record that track so that we can synch it in post-production. That's another reason why it's so critical to have the gear actually working." The mics are plugged in while viewers are tuned in.

Ask Danny about a memorable experience over the past four years and he'll tell you about the time that Florida Georgia Line was performing on the Bluebird set for a live feed in the Season 3 premiere. "We did it twice – for the east coast and west coast. I think I had 1:09 to do a changeover between our actors and Florida Georgia Line. It was a tremendous feat and the band was very gracious to be a part of that historic night.  We used all Shure mics for the live performance that time – twice."

In 2014, cast members and the hardworking crew hit the road in a tour that by 2016 expanded to 20 sold-out shows in the United States, Britain, Ireland and Australia. Fan favorites Clare Bowen (Scarlett O'Connor), Chris Carmack (Will Lexington), Charles Esten (Deacon Claybourne), Will Chase (Luke Wheeler), Sam Palladio (Gunnar Scott) and other members of the cast took to the stage. Danny was there, too, channeling his musician chops, this time as a guitar tech. "It's such a pleasure. It's like you're doing a show about NASCAR racers and then you get to be a member of the pit crew on weekends," he said.

Danny continues to be amazed at the songwriting and performance talents of the cast, all country music ambassadors and Nashville evangelists: "In terms of musicianship, our cast of actors has really come up to the level of the characters they play. Life-imitates-art-imitates-life on this show."

Used on the Nashville Set: