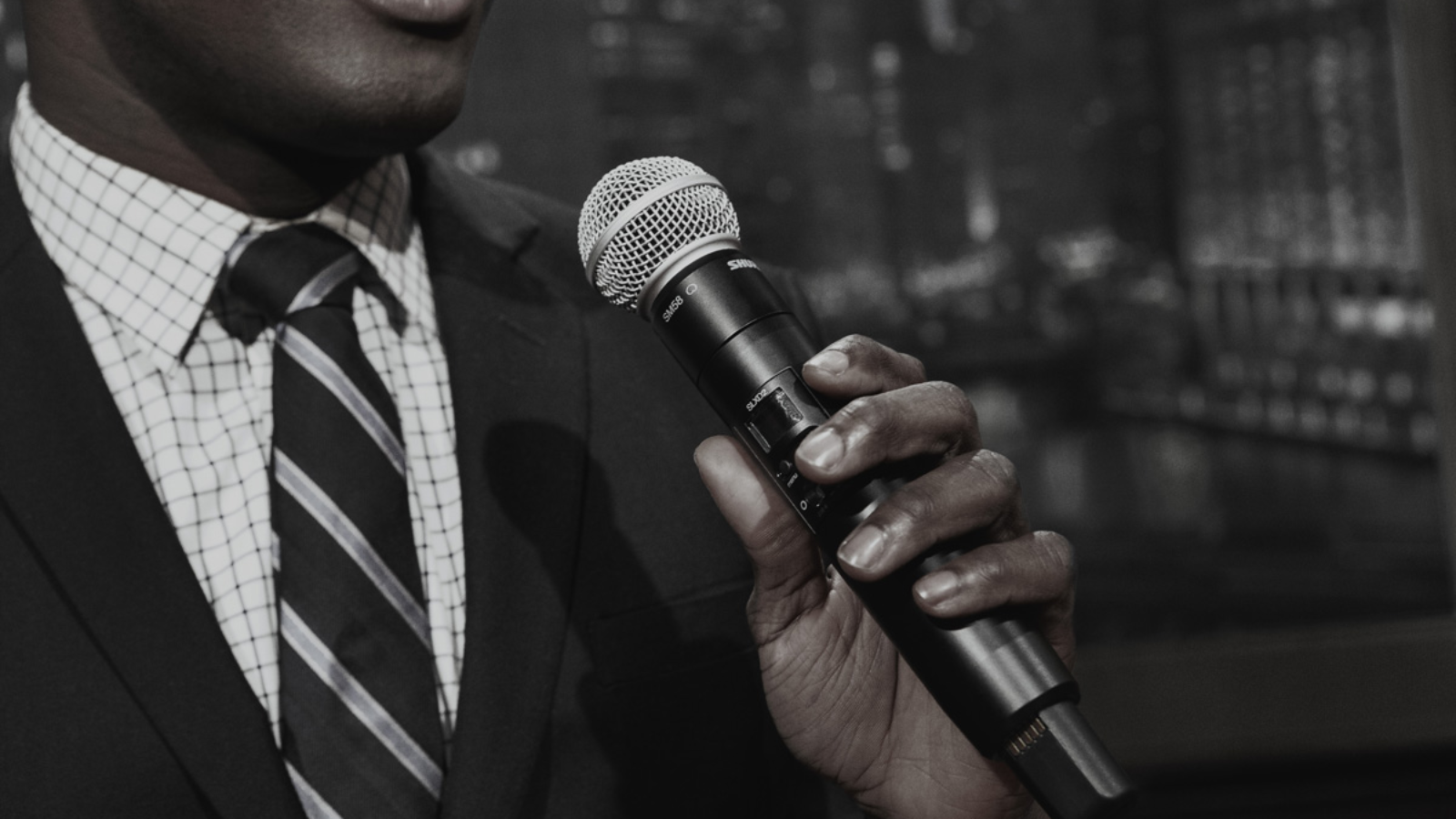 Wireless is one of the most mysterious and misunderstood parts of audio, but selecting and installing new wireless microphones for a small school, church, or theater is something that you can probably do yourself.  In the first installment of DIY Wireless, we discussed choosing a frequency range.  In this article we’ll talk about transmitters and batteries.

Bodypack transmitters often serve triple-duty.  They might be worn by presenters at a school board meeting or staff training session, by student actors in a play, or by guitar players at a talent show.  A variety of sources demands a variety of input devices.  Be sure that the bodypack transmitter you choose offers an input connector rather than a hard-wired microphone or guitar cable.  That way, you can use different mics in different scenarios, and if a mic or cable fails, you can just replace it rather than send the entire transmitter in for repairs.  A choice of lavalier mics for presenters, headworn mics for actors, and instrument mics and guitar cables for musicians should be available so you can pick the options that you’ll need.

Handheld transmitters can be held in the hand by a singer or presenter, but are often attached to the gooseneck on a podium or lectern to avoid the tripping hazard caused by cables running across the floor.  Handheld wireless mics are also great for handling questions at an assembly or town hall meeting, because a couple of assistants with mics can roam the aisles so that audience members don’t have to leave their seats in order for their question to be heard by everyone.

Two Risks When Using Wireless Microphones (And How To Avoid Them)

No matter how hard we prepare for a play or special event, AV technicians share one thought:  what if the sound goes out in the middle of the show?  That can happen for a couple of reasons with a wireless microphone.  The most common cause is the battery going dead.  Users often insert fresh batteries in the transmitter before every event as a precaution.  To avoid wasting the half-used batteries that are still perfectly good, put them in a bin marked “rehearsal batteries” or something similar and use them for non-critical situations.  With the Shure rechargeable battery, the system can display the actual operating time remaining in hours and minutes on the transmitter and/or receiver, so you never have to guess whether there’s enough power remaining to get through a meeting or event.  Accurate battery metering also helps you to squeeze every bit of power from your batteries before recharging them.

A second cause of failure with wireless microphones is simple user error.  Wireless transmitters are often in the hands of novice users who think “what does this button do?”  They may inadvertently turn the transmitter power off or change the frequency without knowing it (and with no time for you to fix it.)  On some transmitters, the buttons can be electronically locked to prevent the power from being turned off or the frequency setting changed by an unauthorized user.  Needless to say, this can be a huge boost to your peace of mind.

The Advantages of Rechargeable Batteries for Wireless Microphones

Anyone who has used wireless microphones for a while has gotten used to spending money on alkaline batteries and feeling guilty about throwing away piles of dead (or even partially-used) batteries week after week.  Fortunately, lithium-ion rechargeable battery packs are about the same size as a couple of AA alkaline batteries and last just as long.  The lithium-ion chemistry also eliminates the “memory effect” found on older NiMH or NiCd batteries, and they can typically be recharged 500 times or more, even if they’ve only been used for an hour or two each time.

If your transmitters have external charging contacts, then at the end of the day there’s no need to remove the battery at all – just drop the transmitter into a charging dock and in a few hours it’s ready to go again.  Even if you forget, lithium-ion batteries typically charge up about halfway in an hour or so, which is often enough to cover a short meeting or event.

There’s also another benefit to rechargeable batteries that can’t be quantified.  You’re not throwing buckets of dead alkaline cells into a landfill every month, so you’ll be supporting your organization’s environmental awareness efforts.

The True Cost Savings of Rechargeable Batteries for Wireless Microphones

While it might seem expensive, the upfront cost of a rechargeable battery pack and charger for a wireless microphone pays for itself pretty quickly.  If the rechargeable battery costs $55 and the charger costs $70, that’s a total investment of $125.  If the battery is used for eight hours 500 times, that’s 4000 total operating hours.  That works out to $125 for 4000 hours, or 3.1 cents per hour.  (On SLXD transmitters, you can check how many charging cycles the battery has been through and the battery’s health compared to a new battery.)

If we assume that AA batteries cost 50 cents each in bulk and the transmitter needs two batteries, that’s $1 for eight hours of use or 12.5 cents per hour.  So using alkaline AA batteries for 500 events costs four times as much as the rechargeable option and results in 1000 batteries being disposed of in landfills.