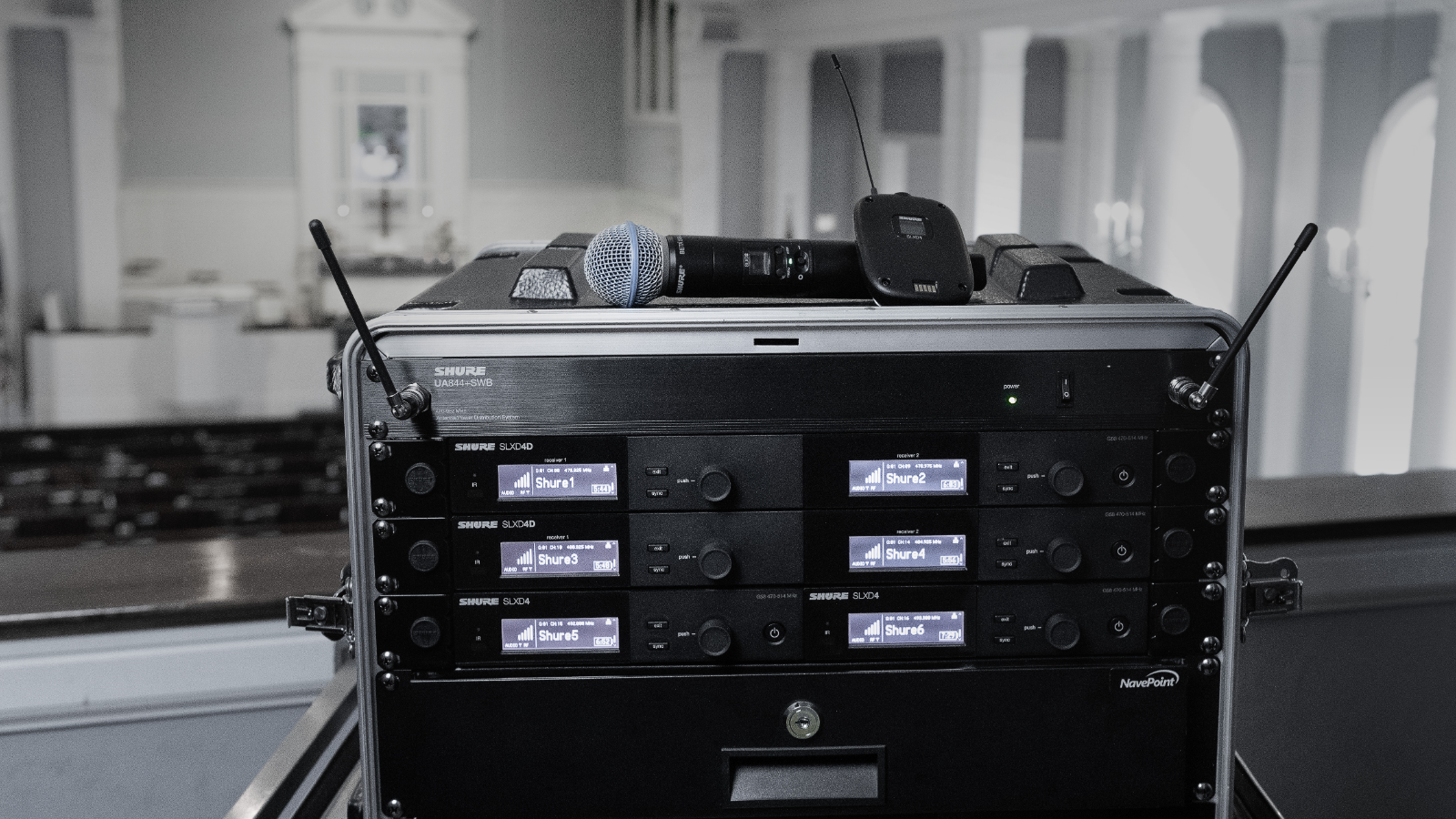 Wireless is one of the most mysterious and misunderstood parts of audio.  But selecting and installing new wireless microphones for a small school, church, or theater is something that you can do yourself.

In previous installments of DIY Wireless, we discussed choosing a frequency range and transmitters and batteries.  In this article we’ll talk about receivers.  The receiver’s fundamental job is to accept the radio signal from the antennas, tune to the specific frequency being used by the transmitter, extract the audio from it, and deliver that audio signal to the mixer or other device.

How to Set the Frequency of Your Wireless Microphone

It used to require a technician to determine wireless microphone frequencies and make the appropriate settings on transmitters and receivers manually, but newer systems make the process simple.  Advanced receivers include a built-in RF scanner that can be used to automatically select frequencies.  The scanner surveys the spectrum at the push of a button and detects active TV stations, other wireless microphones, and unidentified signals that must be avoided.

The receiver then selects from an internal frequency list and sets itself to one that is free of competing signals.  On some models, you manually set the transmitter to the same frequency as the receiver.  On more upscale models, you just hold the transmitter up to a small infrared window on the receiver, much like synchronizing a universal remote control to a TV.  (Watch this video showing the frequency scan and sync process.) Additional receivers can conduct their own scan, but it’s even more reliable when the receivers are connected together through an Ethernet port (either directly or through an Ethernet switch) so that frequency settings can be communicated between them.

Which Receiver Is Right for You?

Wireless microphone receivers can be free-standing or rack-mountable; rack mounting is more secure in most institutional settings since the equipment can be locked in an AV closet.  Some models offer dual-channel receivers, which allow simultaneous use of two bodypack transmitters, two handheld transmitters, or one of each.  A dual-channel receiver is more efficient because the two units share the same pair of antennas and the same power supply.  If your installation requires multiple systems in the same room (like a training room, auditorium, or theater), dual-channel receivers can simplify installation and save money because they cut the number of required antenna connections in half.

Virtually all wireless microphone receivers on the market today utilize diversity reception with two antennas.  As the transmitter moves, reflections of the signal bouncing off of walls or floors cause signal fades that can result in noise or momentary dropouts.  Diversity counteracts the effects of signal strength variations that occur as the transmitter moves around the room.  The receiver responds by switching to the antenna whose signal delivers better audio.  Of course it is essential that the diversity switching process is silent and free from clicks or pops.

The audio level provided by different sources can vary considerably, so it’s important for the wireless system to have some means of adjusting the system level or “gain”.  For example, a presenter using a lavalier microphone clipped to their shirt results in a pretty low audio level, while a loud singer holding the mic an inch from their mouth generates a high audio level.  Some systems even allow you to store two gain settings, so if you switch from using a handheld transmitter to a bodypack and lavalier, the loudness of the sound system will be consistent no matter what.

Each receiver is equipped with an audio output (or two in the case of a dual-channel receiver).  A balanced output with professional 3-pin XLR connector is the standard, and permits connection through long cable runs from the equipment rack to the mixer if necessary.  A quarter-inch jack can also be useful for connecting to devices like audio recorders or guitar amplifiers that don’t have a balanced input.  In most cases the two outputs can be used simultaneously.