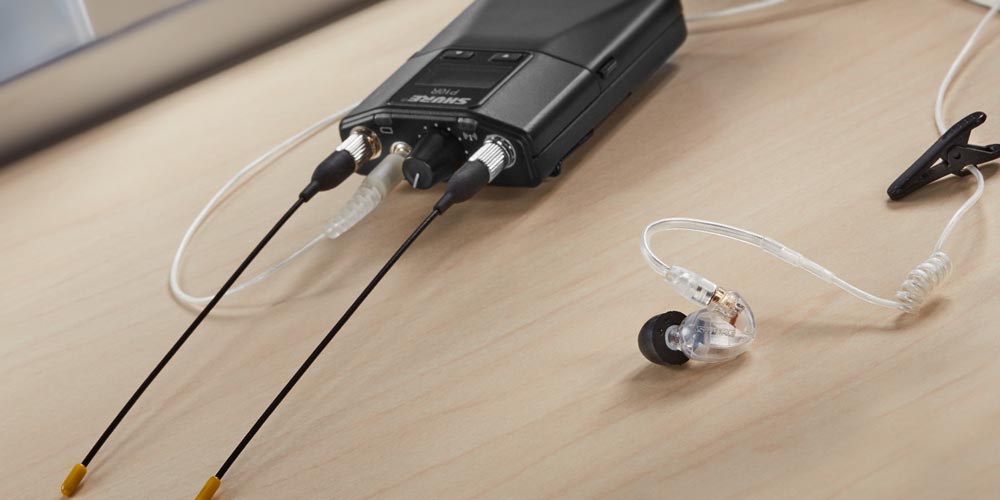 "Build a better mousetrap and the world will beat a path to your door."

As a market development specialist for Shure, part of my role is to expose influential end users to our state-of-the-art products. In essence, I travel the U.S. and meet with power users in broadcast, production, and related fields, demonstrating Shure solutions to some of the most vexing of pro audio problems. I take a hands-on approach that allows potential customers to prove to themselves what works best in their situation. When you've got the right products, it works like a charm!

One product that has been enthusiastically embraced is the PSM® 1000 wireless in-ear monitor system. With its true diversity bodypack receiver and resulting ability to operate reliably in the most challenging stage environments, this product has proven itself to be a reliable performer even on stages full of competing RF signals from microphones, moving lights, and video walls. As a result, it has become the unquestioned go-to IEM system in touring sound, to the point where is routinely specified at major live broadcast events like the GRAMMY®s and the Academy Awards.

One trend that we've noticed over the past several years is that the PSM 1000 has been selling in large quantities into the world of broadcasting, including major news, sports, and network production facilities. Literally hundreds of channels. It's been great to see this pro music product gain acceptance into the broadcast world, but we wanted to know why.

What's interesting is that a lot of these systems are not being used for in-ear monitoring. Because, as it turns out, the PSM 1000 is being embraced as the ultimate wireless system for interruptible foldback (IFB) applications as well.

IFB is essentially a one-way transport system for bringing audio from a production's intercom system to the talent. It's what feeds the little curlicue earpieces you see on-air hosts wearing. Typically, the default audio is the program feed, but its real function is to allow key production personnel to cut off that feed and speak directly to the talent.

Traditionally, IFB systems have been bandwidth-limited to focus on speech, with both the wireless transmission and the earpiece being notorious for having high RF reliability (usually through high transmitter power) but relatively poor fidelity (voice-band audio with high noise floor). As it turns out, the design of the PSM 1000 meets (and exceeds) all the requirements of a traditional IFB system, but with fantastic fidelity.

As a result, broadcasting has become a new and vibrant vertical market for in-ear monitors. Here are some of the key design features that make the PSM 1000 the ultimate IFB system:

With its twin quarter-wave antennas, the P10R receiver still functions reliably even in high-noise environments. This explains why so many systems are being sold into RF-intensive markets like New York City.

PSM 1000 can fit 16 channels of stereo IEMs into a single TV channel (8 MHz) of bandwidth. Then it doubles down: With exceptional stereo separation/isolation, it's possible to run two independent IFB feeds on a single PSM 1000 carrier, simply by feeding Left and Right inputs with IFB1 and IFB2 (respectively). Utilizing MixMode® on the receiver and panning hard L or R gives you isolated feeds. The result is that you halve the number of frequencies required, or you can cram twice as many IFBs in the same amount of spectrum that traditional IFB system use.

PSM 1000 receiver packs (P10R) feature RF AGC and Noise-Sensitive Squelch, both of which seamlessly prevent common wireless problems, and are compatible with "wet line" inputs from daisy-chained systems. The Automatic Gain Control for RF reduces signal fluctuations and prevents RF overload when getting too close to the transmitter antennas, while the squelch automatically detects and mutes RF noise before it becomes audible. Eliminating noise bursts in their ears makes talent very happy.

Musicians require in-ear monitors with fantastic fidelity and negligible latency. This turns out to also be highly desirable in an IFB system. Studio technicians and talent may not require full-bandwidth response and low noise floor, but they sure do appreciate having it! More and more I am hearing from A1's that talent wants to hear music during breaks. Giving broadcast talent the same quality that is afforded a world class musician on tour is something that is appreciated by both the talent and the mixers.

For the talent that need high isolation and high fidelity, Shure's new EAC-IFB cable provides the perfect path for combining Shure's award-winning SE Series earphone line with PSM 1000 in IFB applications. Let's face it, the curlicue acoustic tube driven by a remote transducer is less than desirable audio quality. Shure's products provide hi-fidelity sound with reliability that is unsurpassed in our industry.

Another huge advantage of the PSM 1000 is that it is part of the Shure ecosystem, the centerpiece of which is our free Wireless Workbench software. WWB handles sophisticated frequency coordination and monitoring, plus set-up, calibration, and diagnostics – and not just for PSM 1000, but for the full range of wireless microphones as well.

Basically, by engineering the PSM 1000 to ensure flawless operation as a touring IEM, Shure has designed the perfect wireless IFB system. This extra layer of utility has resulted in significant sales – expanding the PSM 1000 into the broadcast market, and extending across the Shure ecosystem to include a host of network-friendly wireless products, including the original Axient®, the new Axient® Digital, and ULX-D® microphone systems.

I think it's fair to say that the PSM 1000 really is that "better mousetrap," and it's exciting to see broadcasters beating a path to our door.

Bill Ostry is a pro market development specialist at Shure, an all-around nice guy, and he's been playing drums since he was five-years-old.