The Front of House Gig: Touring vs Resident 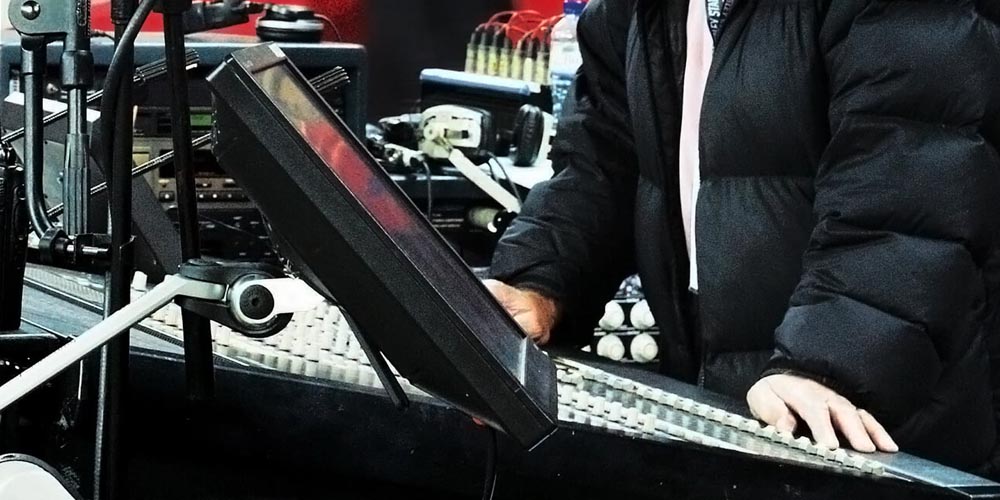 The Front of House engineer is the magician who makes concerts and live productions sound the way the audience hears them. To me, an FOH engineer is equal parts techie and artist. When you're crafting the sound for a live show, you have to know all technical stuff like EQ, gain, decibels, et cetera, but there's an art to tuning a show according to the room. You can make it sound different by adjusting faders in certain ways.

The challenges a FOH engineer faces can vary depending on whether he or she is touring with one act or based in-house at a venue where lots of acts come through to play. I was lucky enough to learn the differences from David Levin and Juan Garcia-Spitz.

The Touring Side with David Levin

David is currently on tour doing FOH and Ableton for Shure artist Tove Lo and filling in on monitors with Cut Copy. This means world travel and jumping back and forth from role to role. David has previously worked with Icona Pop, Washed Out, Delorean, and A Place To Bury Strangers.

Brooke Giddens How do you prepare for your job on the road?

David Levin Home is where your phone charger is. As long as I have my passport and a credit card, it doesn't really matter if I forgot anything.

BG How do you approach each show you do? You've worked in many different genres. Is there a difference in how you do sound for each one?

DL I approach every show from the perspective of their fans, no matter what style of music. To prepare, I will listen to my artist's music and also their influences and contemporaries so I have a fundamental understanding of what makes the band's music fun for their fans and enjoy it in that way myself. I'm then in the same mindset as the fans, so when I'm doing FOH, I'm mixing for my own enjoyment.

Since I mainly work in pop and and live electronic music, knowing the modern sounds and how to achieve them live is very important. These styles of music involve a lot more processing than some other genres. So, I'll listen to a lot of the other artists in those genres and try to catch some of their shows so I know what vibes to expect.

The Shure UHF-R® Wireless microphone line allows me to have rock-solid RF and the flexibility to just change the capsule to suit various venues, so once I know the sound I want to achieve for an artist, I know I can get it one way or another with those mics.

The Resident Side with Juan Garcia-Spitz

While David has toured with different types of acts over the course of his career, he has the luxury of staying with a particular act for sometimes several months at a time. This allows him to really figure out that artist's sound. Sure, he still has to deal with the way venues affect an artist's sound, but everything else, for the most part, remains the same. The opposite is true for engineers with residencies at venues.

Juan is the VP of Audio Engineering at JBTV and also does FOH at Thalia Hall, Lincoln Hall, The Vic, and several other venues in Chicago. So, while David and Juan do the same thing, Juan has the advantage of working in familiar spaces with every act that comes in.

BG So Juan, how do you prepare for running sound for an act you've never heard of?

Juan Garcia-Spitz Usually I try to look at a band's website and check out some of their songs to get a sense of what the day has in store for me.  If I'm mixing FOH, I'll pay attention to the effects and overall production of the mix on some of their hits and singles. Not every band digs a huge kick drum or pristinely clean vocals right off the bat, and kicking off a soundcheck by having a quick chat about how they want their overall sound to be presented to the crowd that night always makes bands feel immensely more comfortable. Plus, as an engineer, it gives you targets to keep you busy and engaged the entire set. That's particularly important when you are working with a band who plays music that isn't within your own music taste, where your instincts would naturally guide you to what's right.

BG What's the biggest difference between being a touring FOH engineer and having a residency at venues?

JGS Besides the pay, maybe sleeping your own bed or waking up in an amazing new place every morning?

Seriously, I would have to say the main difference is your list of priorities. When you're hired by the band, you're always trying to make sure that everyone in your crew is happy and has what they need to put on a good show or do their job.  You're constantly thinking of the big things like getting the band all the time they need to set up and soundcheck, learning individual songs to really nail cues and differences in tones, getting everyone downtime before the show so they have a relaxed performance, and making sure the band gear is safe.

When you're a house engineer, you always want to make sure that a touring band comes in, feels welcome, and has a house crew that is taking care of them that day.  That is still very important. However, the absolute main reason a house engineer is hired is to safely operate the house gear.  So you're constantly thinking of checking amps and limiters, helping a band tailor their volume to the size of the room, focusing on locking in the overall mix quickly and catching solos on your toes, keeping pathways clear so no one is hurt later during showtime when it's dark and dimly lit, and being the driving force who keeps a show moving on time and in an orderly way.

JGS The space you're mixing in. It's the x-factor that always keeps you on your toes. Indoors, you always are fighting reflections, nodes, and how much the room will change with the audience. Even if you have a completely treated stage, you can have artists who freak out if they hear things too clearly or too dead. Outside you have noise restrictions and have to constantly monitor the weather. I will say that our technology is quickly catching up and making this less and less of a factor.  But it's not everyday that you'll be on a completely steerable rig. And as far as I'm aware of, no one can really do anything to help you stave off the weather.

Which Side Of the FOH Fence Is Right For You?

It's a good thing I don't have to choose, because I can't decide which I think would be harder or more fun. As a touring engineer, you can really dial in to what sound the artist is striving for each performance, and you have the challenge of trying to make it sound the same for each show, despite the differences in rooms. I think that could be a fun (but possibly annoying) challenge that would keep you on your toes. However, a fun thing about be a resident FOH would be hearing new acts every time you work, so you're not having to watch the same show over and over again. Plus, you become very familiar with rooms and know all their little intricacies. I have to admit, though, it would be tough to run sound for genres and bands that you aren't huge fans of... So, for me, it's a toss-up.