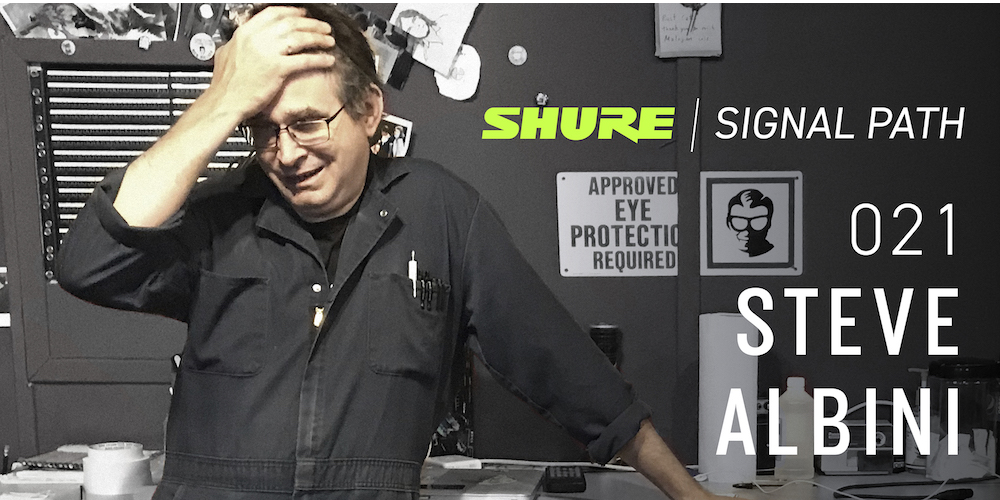 For this episode of Signal Path, Thomas Banks headed down to the Chicago studio Electrical Audio to wax nostalgic with the engineer and producer Steve Albini. They talk about a special gig from 1986 and discuss the joys of creating one's own creative community.

Thomas Banks: You used to record people in your house, right?

Steve Albini: Yeah, I had a house about a mile from here, and I had a studio in that house and the studio that we're in now.  Studio B's control room is essentially the control room of that house studio moved to this location. So this console, those tape machines, they were in the attic of the house on Francisco Street. And when this studio was finished in the build-out, we literally just unbolted everything from over there, brought it over here, installed it over here, flipped the switch and started making records.

And when did you make that commitment?

We bought the building in December of ‘95 and then the first session was in April of ‘97. So it was about a year or a little over a year in build-out to get this studio running. Studio A wasn't completed for another year after that, but Studio B was completed in April of ‘97. And then I started living here as well in June of ‘97.

The cost of finishing everything was beyond my expectation, so I ended up having to sell my house to a friend. And that money got plowed into the studio and from then on it's basically just been self-sustaining. The money made at the studio goes back into the studio and pays for the operation and the studio.

That's wonderful. So it's been a going concern for about 20 years now?

We had our 20th anniversary last year. We threw a little party for ourselves and some bands came. It was great.

Well, thank you. My goal when I bought this place was making a commitment for the next 20 years and potentially for the rest of my life. I'm gonna be here making records in this building. The commitment was that if I do it well, it will carry on as a resource for all of the musicians who were still my peers and my friends.

I feel good about the fact that we've maintained that position, that we are a resource for this community of musicians that I've been a part of. That has enriched my life since I moved here. Since then, I've been embedded in the music scene in Chicago and I have been supported by that scene. I have tried to give back to the scene as much as possible.

Before I had a studio, I was doing things like putting on shows, putting out records from other bands and doing my part to hold up my end of the stick basically. And then, as my focus sort of narrowed to being a recording engineer, I concentrated on that as a unique contribution I could make.  I have a lot of experience recording live music of all kinds that hopefully makes me useful to the community that has given me so much satisfaction.

I thought I would just home in on a particular show that I saw in 1986 and I brought some rock and roll ephemera today to help jog your memory. So it was Scratch Acid, and I remember just how incredible David Sims was.

Was that the show where he had like fake poo in his pants, and he pulled out handfuls of fake poo and rubbed it on people?

I don't recall that.

You were taking money at the door.

That sounds about right.

I was thinking, “Oh, the guy that we're going to see is also the guy at the door.” Turns out he's the guy that made the poster and rented the hall and did every aspect of it. We paid in quarters and according to my friend's memory, you asked us if we had robbed an arcade.

There was a video arcade across the street on Belmont Avenue. It was called Dennis' Place - Dennis' Place for Games. Yeah, I think I remember that. And so I just assumed that somehow you had that you had robbed schoolchildren going to Dennis' Place.

I remember you taunting Santiago Durango about his taking time to tune between every song. He had this fretboard spray that he was using up and down his fretboard between each song.  He went through three or four cans. I think it was a gimmick, but it was it was a memorable gimmick.

I don't remember that at all. Let me tell you my favorite Santiago moment.

When Santiago was still in Naked Raygun, before they had put their first record out, they were playing in a basement club in Rogers Park on the periphery of Rogers Park and Uptown called COPD. It was on the corner of Devon and Sheridan.

There was a stairwell that went downstairs, and at the bottom of the stairs there was a sign that said, “COPD”. This was clearly a basement that was not intended to be a business, but had been converted into a sort of makeshift bar. There was a performance space, with a plastic sheet between that hung up between the bar and the performance space. And they had a Donkey Kong machine.

So anyway, I saw Naked Raygun playing, and Santiago was tripping on acid. He was wearing fuzzy purple monster feet boots that went up to his knees - normal punk rock attire.

His guitar had the most incredible droning underwater sound. There's a sound that you may be familiar with; the way the neck pickup has more bass than the than the bridge pickup. So he was on the neck pickup of his Telecaster and it was a very deep sort of booming sound. He was playing through an acoustic 160 bass amplifier and he had the bass control and the volume wound all the way up and the treble control and the mid-range turned all the way down.

There was a graphic equalizer on it and he also had all the treble turned down and all the bass boosted on the graphic equalizer, so there was just this subsonic rumble. It wasn't even clearly identifiable as guitar. He also had a fuzz tone. There was this saturated low frequency penetrating roar that was indistinct and unidentifiable. He instantly became my favorite guitar player.

Listen to the full interview with Steve Albini and subscribe to Signal Path with the podcast provider of your choice below. 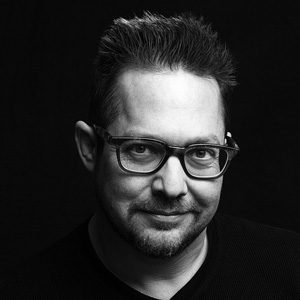