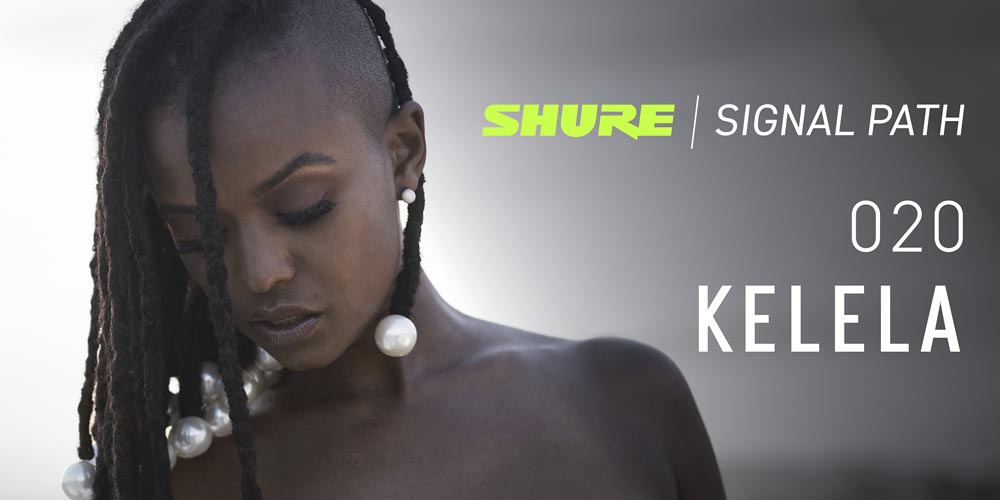 For the latest episode, we sat down with the singer Kelela during Ableton's Loop Festival in Los Angeles.

Known for blending traditional R&B with more experimental electronic music, it’s her talent for turning these diverse influences into something totally new that made her album Take Me Apart such crucial listening.

In the podcast, Kelela discusses her early musical inspiration, why she got a late start as a professional musician and her creative approach to songwriting.

Born into a family of first-generation immigrants from Ethiopia, she grew up outside of Washington D.C., which helped expose her to diverse cultural and musical influences from a very early age.

“My parents' record collection sort of dabbled in a lot of pop, but then there was a pretty robust presence of world music and jazz – jazz vocals specifically,” she explains. “It felt really wide open.”

In particular, she credits her father for introducing her to jazz culture.

“My dad is really into not just the music. He's equally into the politics of jazz and just sort of the narrative of black people in this country and the resilience that's represented in jazz,” she says.

But after being accepted to a prestigious performing arts school that her parents could not afford, Kelela initially postponed her dream of pursuing a professional career in music.

“It was sort of the beginning of that process of, I guess, feeling like my dreams were crushed or that it was over,” she says. “It created an overwhelming fear. I became resentful then I was feeling like I was failing at everything, because I didn't want to be in regular school.”

Music remained an important part of her life, however, and growing up in the predominately white suburbs meant she wasn’t afraid to sample from seemingly incompatible genres, including participating in the local jazz and punk scenes while in college.

“There is just a different relationship with music making and sharing that I was getting with my jazz musician black friends and then there was a whole other culture that I was experiencing with my punk house white friends,” she says. “And it was very liberating to go from one to the other and back and forth.”

Eventually, in her mid-20s, she started writing her own songs in earnest and set foot on the path that would take her to the intersection of traditional R&B and more experimental electronic music.

“I think it's interesting because a lot of people just assume that my references for electronic music are white. For me, it was actually just not that at all. My relationship with like highly produced experimental music is actually quite black,” she says, citing producer Timbaland and rapper Missy Elliott as important sources of inspiration.

So with such a rich set of influences to draw upon, what motivated her to find the musical space she now calls home?

“I was so committed to bringing something new to the table that I just wasn't resting until I found that,” she explains. “I think every time some you hear something new is because there was intention there. It's because somebody was trying to find something beyond what already exists.”

It's that drive to create something new that also makes remixing her material so attractive to Kelela.

“We all know how the song goes, that's the composition. And then you're supposed to interpret it,” she says. “I think for me that's just always how we're gonna flip it, how we're going to make you not even recognize what the song is until the one vocal comes, I've always lived for that experience.”

Listen to the full interview with Kelela now and subscribe to Signal Path from the podcast provider of your choice below.