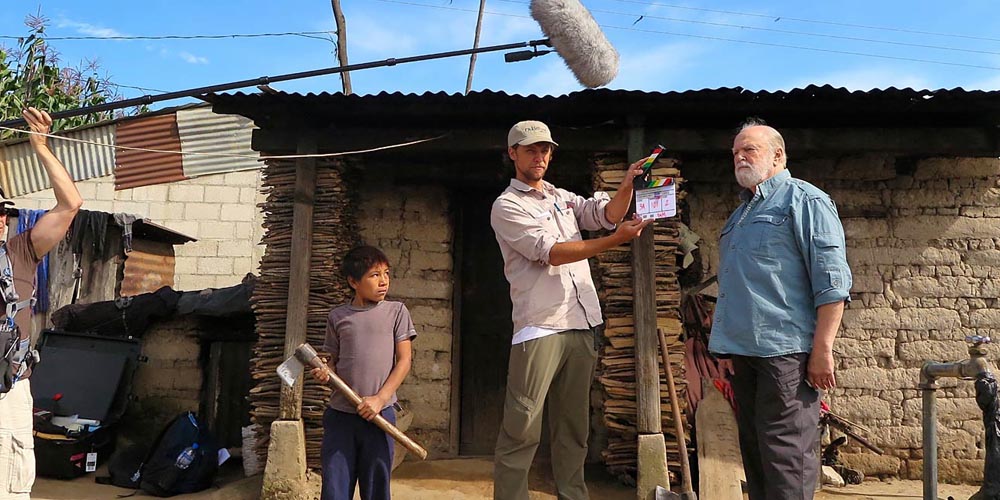 Most videographers and budding filmmakers agree: it's just as important to capture and manipulate audio as it is video in production and postproduction. Audiences, according to the experts, are more irritated by poor sound than poor cinematography. Think about it: we've all seen badly lit shots that we might have handled differently. But bad sound is almost impossible to ignore.

For sound advice, we turned to Dean Miles, who has been a professional location audio operator for television and film. His specialty: field recording (in places like the wilds of Central America). In this post, he targets the one-person-camera operator and explains the importance of recording sound elements to create a soundscape that complements the visual imagery of your project.

What are sound elements?

Sound elements are components of sound that are recorded during the production process and then edited together to create the rich stereo mix that we all know and love.

When I'm recording sound on location, I need to record a variety of sound elements to create a stereo mix in post. These include recording dialogue, supporting ambience, room tone, and environmental ambience.

A good way to understand sound mixing is to remember that sound has
depth, just like a visual image. For example, when everything in a photograph is in perfect focus, all elements making up the image compete equally for the viewers attention. But when there's shallow depth of field and only the primary subject in the photo is in focus, the image gains depth and there is separation between the various visual elements. It purposely draws your attention to a specific spot. Sound is very much the same.

To illustrate the layers of sound in a stereo mix, let's take a sit-down interview and dissect the visual as well as the sound.

One ugly bird, but the photo's perfect to demonstrate layers[/caption]

When you shoot an interview, you draw the viewer's attention to the talent by having the talent sharply in focus and separated from the background. We do the same with sound. Dialogue is typically mixed as the loudest sound element. By panning it to the middle, it's clear, sharp and draws your attention – we could say the dialogue is in focus.

The next layer of your shot usually consists of elements that are slightly out of focus surrounding the subject, such as pieces of furniture, artwork, lamps, etc. These visual elements provide context as well as visual depth and support the in focus image. Supporting ambience does the same thing. It's not as loud as dialogue and it's panned a little wider. You can still make out what the sounds are, but they're not the focus of your listening - they support the dialogue.

So when I'm sitting in my mixing chair with all the sounds elements I need, I layer them like this:

Your first and most critical sound recording will be dialogue. You'll use the camera-mounted mic, lavaliers, and handheld mics when you go it alone. One very important detail every mic you use to record dialogue with is that it must be mono - all dialogue recording must be in mono! If you think that recording dialogue in stereo is better – it's actually not. Stereo dialogue recordings always sound funny in the mix and they don't play nice when mixed with mono dialogue recordings.

This is audio recorded when shooting b-reel. It should be recorded properly whenever possible. Here are some things you can do to improve the quality of your supporting ambience tracks:

Room tone is a dialogue-free recording of ambience that's crucial for smooth audio edits. The best time to record room tone is immediately after you're finished the dialogue recording so it sounds the same as the ambience behind the on-camera dialogue. It's important to record with the same mic in the exact same position. For example: after an interview is completed, ask everyone to stay where they are and be quiet. Widen out your frame so it's easy to find the room tone recording during editing. Start recording and identify the track by saying "30 seconds of room tone". Record for a minimum of 30 seconds.

Avoid the temptation to record room tone at the end of the day. It's not going to sound the same and chances are you'll forget until you're in the car on the way home.

Record this ambience track separate from any shooting. It's for sound only. Use either the camera-mounted mic or a small portable field recorder like aZoom H4N. Remember – what you're recording is deep background sound. Think in terms of this sound being 'out of focus'.

For example, let's take a shoot on a golf course. To record the environmental ambience element, you'll need to move away from distinguishable sounds that are too specific (or 'in focus') – a noisy clubhouse, golfers talking loudly, course maintenance workers operating equipment, etc. You'd want to separate yourself from all these distinguishable sounds by walking out onto the golf course and finding a quiet place away from those sounds. Record a minimum of 2 minutes.

Something I do to save time and be more present on set is to leave my field audio recorder in an isolated spot to record the environmental ambience element while we continue shooting throughout the day. I'll leave it for at least fifteen minutes. At the end of the shooting day I'll assemble the usable parts of the environmental ambience recording down to a two-minute clean track.

As the one-person camera crew, you're responsible for capturing all needed sound elements. If you don't capture them, you won't have the elements in post that you need to create the beautiful mix you were hoping for.

Camera operators, the plain truth is, good audio will make your videos look better. By taking time to properly gather and record all needed sound elements the overall quality of your projects will dramatically increase. You're going to be judged by the final production, and the sum of all its parts. If your sound is amateur, your production will be too.

"I carry the full line of VP89 shotguns and I'm a big fan. After years of using Neumann's, it was hard to pry those beauties out of my hands, I found the VP89 series more flexible and forgiving in tough conditions.

I also carry and use UR series wireless systems. They're rock solid and very easy to use - no dropouts with this system. It's so solid that I now use a wireless boom! That's right, I have so much confidence in the UR3 and UR5's stability that I'm putting every sound recording for every shot in the hands of Shure.

I carry, use, and recommend the VP83F LensHopper™ camera mic to all DSLR users I work with. It's the only mic with a built-in recorder so it bypasses the notoriously hissy sound DSLR's are known for. It's a game-changer for the DSLR operator."

Dean Miles is the author of three online courses, two books and an ibook on audio for video.  Find them all, plus more information about Dean and his partner Scot McDonald at The Location Crew.