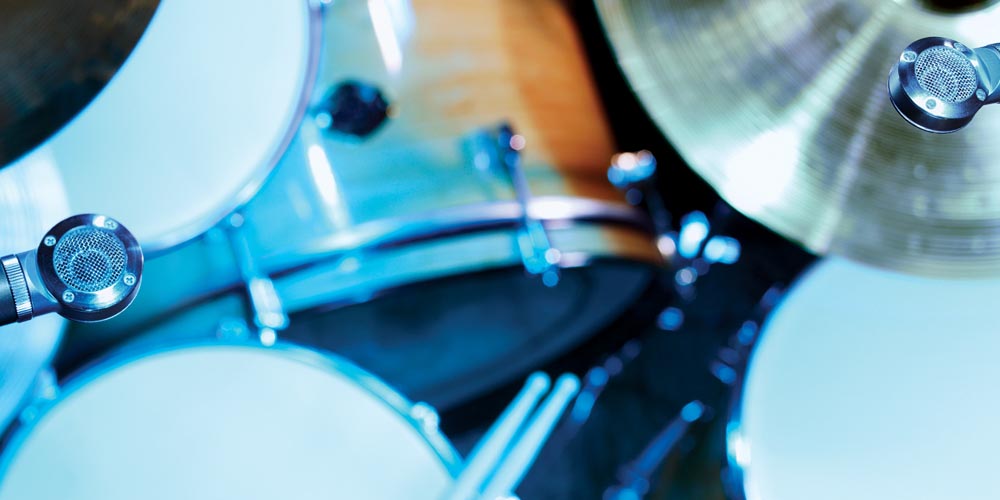 The XY or coincident pair approach wins points for its guaranteed mono compatibility. Because the two capsules are so close together ("coincident"), sound waves from every drum and cymbal impinge upon the two mics' diaphragms nearly simultaneously, avoiding any risk of comb-filtering due to partial cancellation of out-of-phase waves when the two OH tracks are heard in mono.

A consequence of coincident positioning is that the resulting stereo field is narrow, even when the two OH tracks are panned hard L/R. This is a good choice for arrangements in which the drums play a supporting role, or when mono compatibility is critical.

Overhead microphone height is an important consideration in this and every technique. If the mics are very high, the capsules will point straight over the sides of the of the kit, essentially putting the entire instrument off-axis. This will result in an overly roomy sound.

Lowering the microphones, or using an angle less than 90o can result in a more direct sound, although the kick and snare will always be off-axis.

Regardless of height, I recommend mounting the XY array directly above the snare drum, to ensure that the snare is centered in the stereo image.

The M-S technique, like XY, ensures mono compatibility. And like XY, it produces a relatively narrow stereo spread.

A primary benefit is that the perceived size of the space can be changed at mix time, by varying the amount of "side" channel in the mix. This is often described as adjusting the "stereo width," but to my ear the drum kit doesn't get any wider. The high and low toms don't get farther apart. The room gets bigger, but the drums sound less direct.

The challenge of M-S is that one of the two microphones is not pointed at the drum kit. The figure-of-8 mic is positioned so the drums are in the mic's null point; the microphone hears only reflected sound. If you are recording drums in a small or untreated room, chances are this reflected sound is not what you want on your record.

But if the room does sound good, M-S is a great way to combine a dry, direct sound -- the Mid mic -- with as much room ambience as suits the rest of the production.

The Recorderman technique is probably the newest and least-known technique here, although it is conceptually similar to the overhead configuration of Glyn Johns' more-famous approach.

It requires two Cardioid microphones. One is suspended 32'' above the center of the snare drum, pointing straight down. The other is positioned near the drummer's right shoulder, pointing directly at the snare drum from 32" away.

This technique requires that the kick drum is also equidistant from both microphones. This can be checked by taping the two ends of a length of string to the center of the snare and kick drums, respectively. Pinch the string together at the point where it touches the mic above the snare, so that both legs of the string are taut. Move that point of the string in an arc toward the drummer's right shoulder to find the perfect location of the second microphone -- at a point where it, too, is 32'' from the center of the snare, and equally distant from the kick as is the first microphone.

The two tracks are panned L and R, although not necessarily 100%. Extreme panning of Recorderman overhead tracks can leave a hole in the middle of the stereo field.

Mono compatibility is not guaranteed, except for the kick and snare.

Because the microphones are relatively low, they will hear primarily the drums themselves. Cymbals will be understated, as will the sound of the room.

This is therefore a great way to combat some of the problems that plague live drum recording in home or project studios:

Even in large, purpose-built studios, the Recorderman technique is a useful way to capture dry overhead tracks that can be supplemented with more-distant ambient microphones, should the arrangement call for a roomier sound.

With a stereo bar, ORTF becomes very easy to use. Once the two microphones are locked into position -- with capsules 17cm apart, at 110o-- the single stand can easily be raised, lowered, or angled to tune the array to best suit the size of the kit, the sound of the room, and the desired amount of ambience in the recorded track.

Due to the wide spread of the microphones, it is likely that most of the drum kit will be between them, off-axis. This approach, like mid-side, is less likely to succeed in a small or untreated space, because the microphones will mostly hear reflected sounds. Moving the array closer to the drum kit, whether from behind or over the top, will result in a drier sound.

The ORTF stereo image is wider than XY, MS, or Recorderman, but not unbelievably so. Perhaps because the microphone position simulates human ear position, the resulting stereo field seems very natural and realistic, and generally collapses to mono without significant problems.

The AB or Spaced Pair approach is among the simplest stereo techniques to understand, but it presents the most problems in practice.

Because the microphones are far apart, AB arrays are susceptible to comb filtering. The risk can be mitigated somewhat by keeping the two microphone capsules equidistant from the center of the snare drum -- but even then, the mic placement should be auditioned (in mono) to reveal possible problems with the kick, toms, or cymbals.

Aside from phase-coherency challenges, AB is a powerful technique, with a large palette of sonic colors. By lowering the array, or angling the microphones in toward the center of the kit, room sound can be minimized. Conversely, there are numerous ways to use an AB pair to capture a roomier, indirect sound: by raising the microphones, moving them further out toward the sides of the kit, angling them to point straight down, or changing from Cardioid to a wider polar pattern.

AB arrays can produce a wide stereo image, simply because drums or cymbals very near one of the two microphones will be perceived to come from only that side of the stereo field. This can result in an unrealistically large-sounding drum kit, if the overhead tracks are panned 100% L/R.

Here's how the techniques compare:

About Matt McGlynn
Matt McGlynn is the founder of RecordingHacks.com. The site contains a searchable archive of specifications and insider information for over 1000 microphones, both contemporary and vintage, as well as in-depth reviews, a microphone sale-price finder, and a frequency-graph overlay comparison tool.