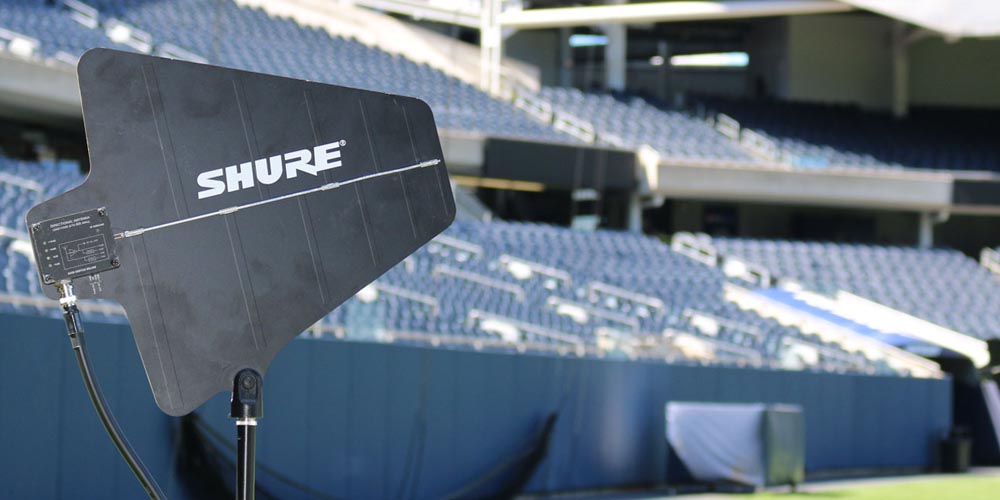 Welcome to the fourth installment of All About Wireless, brought to you by Shure. In this issue, we will focus on antenna positioning. We will also examine dynamic range in RF systems, which provides the foundation knowledge for understanding why the antenna positioning recommendations provided are considered best practice.

Most audio engineers are aware that it is best practice to maintain a clear line of sight between transmit and receive antennas whenever possible; however, there is sometimes confusion regarding what a clear line of sight actually is. A clear line of sight does not just mean the antennas are visible. The electromagnetic wave should be able to propagate from transmit to receive antenna without interference from obstacles. Transparent materials such as glass, Perspex and water should be considered obstacles, as should seemingly transparent structures such as chain link fences and cages.

In terms of location, receive antennas should not be positioned closer than one wavelength to any reflecting surface. The RF signal detected by the receive antenna is a complex mix of direct and reflected waves, the nature of which is constantly varying as the transmitter moves. Positioning antennas less than one wavelength from reflective surfaces can increase the risk of a drop-out due to reflection induced multi-path phase cancellation. Sometimes environmental circumstances dictate antenna positioning and recommendations such as this cannot be adhered to. In these cases, it usually only takes a minor adjustment to antenna location to completely change the system response, so experiment with positioning to achieve best results.

Where possible, antennas should be positioned at least 2 meters above the ground. This recommendation is primarily aimed at avoiding absorption of RF signals by non-reflective obstacles, especially people. This recommendation is not easily met if connecting ½ wave antennas directly to a rack-mounted receiver, so it is especially important to maintain a clear line of sight between transmit and receive antennas in this case.

Polarization losses are in addition to the environmental and propagation losses discussed in the February issue! The cumulative effect of these losses is often referred to as 'Fade'.

Fade in wireless microphone systems is easily measured. The following plot, recorded in Shure Wireless Workbench, depicts the Fade experienced by a ULX-D system during an indoor walk test around a 9m x 8m room, with both AB receive antennas positioned vertically.

The result is approximately 40dB of Handheld and 50dB of Lapel RF dynamic range. Considering all RF systems require a minimum SNR to operate, the exact specification of which is system dependent, it's easy to see that Fade can quickly impact signal stability.

Because the physical orientation of wireless microphones in use is entirely unpredictable, Shure recommends adopting a V shape between AB receive antennas. Positioning the two receive antennas at 315°and 45°to create a 90°angle between the two is a good compromise when dealing with mobile transmitters. If we ignore propagation losses, the maximum theoretical polarization loss with receive antennas oriented this way is limited to approximately 3dB.

Loss is minimized because the transmit to receive antenna polarization is never offset by more than 45°. Performing the same ULX-D indoor walk test with AB antennas positioned in this V configuration yields the following result:

We have now measured approximately 30dB and Handheld and 40dB of Lapel RF dynamic range – remember this test does include environmental and propagation losses. By simply adjusting the angle of the AB receive antennas, we have reduced Fade in this system by 10dB.  This is significant, and in some cases, may be the difference between a successful show, or one plagued by seemingly random drop outs.

Another common point of confusion in regards to antenna positioning relates to the distance at which AB receive antennas should be placed apart. For effective diversity performance, AB antennas should not be positioned less than ¼ wavelength apart, and ideally, they would be placed ½ to one full wavelength apart. Diversity systems work best if receive antennas are positioned close enough to exist in the same field of RF reflections, but far enough apart that a multipath drop out condition at one antenna is unlikely to simultaneously exist at the other.

If receive antennas are positioned less than ¼ wavelength apart, the chances of a multi-path drop out condition being present at both antennas at the same time increases. If they are positioned significantly further than one wavelength apart, the two antennas will likely exist in different fields of RF reflections.  In this case, the likelihood of a multipath drop out condition existing at both receive antennas at the same time is not necessarily increased; but rather, becomes random.  In practice, it is common for diversity receive antennas to be positioned much further apart that one wavelength so as to maximize operating range across a large space.  This approach can work well, but it is important to understand that this is no longer a true diversity system.  Depending on the environment and configuration, this approach typically results in performance more akin to a non-diversity system, albeit with increased range.

These are the key best practices pertaining to antenna positioning. There are also some considerations regarding antenna model selection depending on the environment, which will be covered in a later issue. Next month we will begin focusing on RF system connectivity, detailing some best practices regarding signal distribution, combining and amplification.