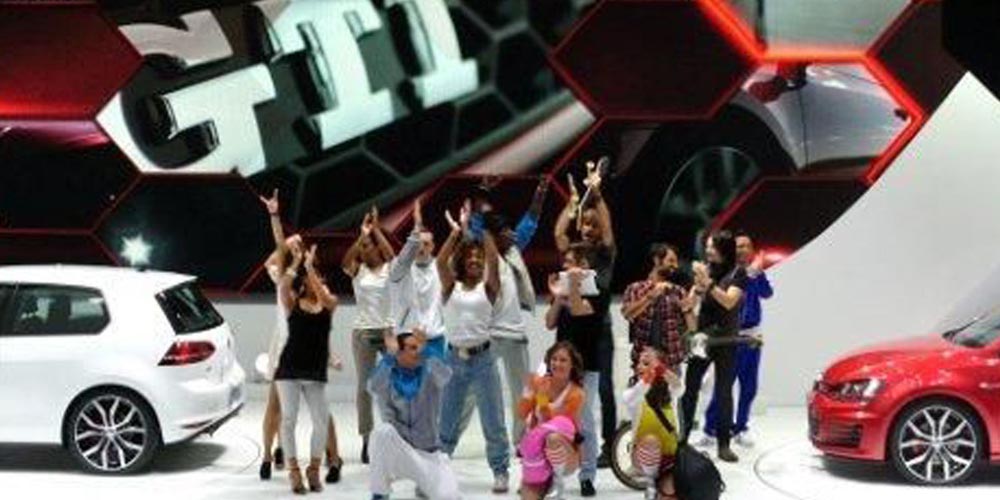 The first event in Beijing, which took place April 23 - May 2, tasked  the systems design team to create a wireless pipeline that would  deliver uncompromised audio performance at Volkswagen’s stand - despite  230,000 meters of crowded exhibition area, 8,000 attendees and more than  2,000 exhibitors. Shure Axient emerged as the clear solution, according  to Sebastian Hornung, Head of Audio Engineering of Winkler Multi Media  Events, who cited the system’s Spectrum Management tools via Wireless  Workbench, along with Frequency Diversity and Interference Detection and  Avoidance as being key factors to maximize transmission reliability  during these exhibitions.

Hornung explains: “Axient solves the interference problems and allows  secure and safe wireless transmission. The system affords our team an  unparalleled level of control and flexibility that helps us navigate  complicated RF environments with a stable and reliable signal.” In  Beijing, Winkler relied on the AXT400 dual channel receiver to produce  11 channels, five of which benefited from Axient’s Frequency Diversity  function, which allows full-bandwidth audio from a single source on two  separate frequencies to produce clean, uninterrupted performances.

The automotive industry is not exempt from the normal demands of a  live trade show. “A major challenge in these settings is the increasing  time constraints on show setup. Additionally, spokespersons often arrive  at the stand within just a couple minutes of the show’s start time,  removing any opportunity for our team to conduct a sound check with  presenters onsite. This is where Axient’s Remote Control lends a huge  advantage, as gains can be set and frequencies changed remotely in real  time. Prior to using Axient, we always had to swap transmitters, which  would interrupt sound check in an already time-limited situation, and  now we have the Remote Control function to accommodate on-the-fly  adjustments,” adds Hornung.

On the heels of a successful show in Beijing, Winkler once again  selected Shure Axient to wow automotive crowds at Volkswagen’s stand  during the recent show in Paris, held September 29 -October 14. There  the Axient system configuration included three channels on Frequency  Diversity with beltpacks, along with 12 channels operating in single  mode.

“Two major shows were executed without a hitch, and more importantly,  we didn’t have to worry about spectrum or interference issues. This  wasn’t always the case in the past and Axient’s robust feature set gets  the credit for combatting hostile wireless environments, thus  eliminating the headaches typically synonymous with live exhibitions,”  comments Hornung.