All About Open Back Headphones 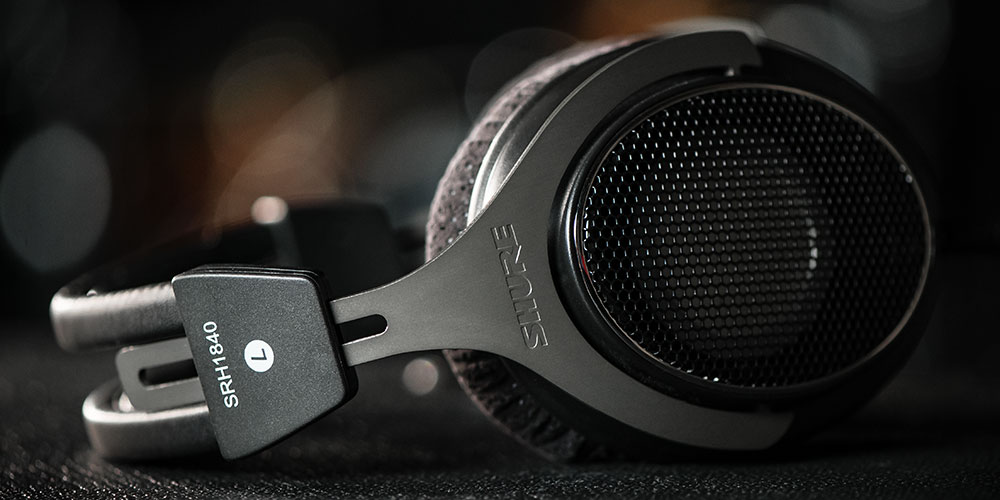 For years, audio manufacturers have trumpeted the benefits of noise-cancelling headphones. TV commercials invariably depict stressed-out  corporate types struggling to find a piece of Paradise on a transcontinental flight, but … headphones that let sound in?  That's the magic of open back headphones.

Open back headphones have ports that allow sound to enter and exit through the earcups. Audiophiles and engineers choose them because the sound can be more natural, open, and accurate (than closed back headphones); offering a wide stereo image and increased depth of field. For mixing and mastering, the sound produced by open back headphones more closely approximates monitor speakers. The advantage, according to Shure Product Manager Michael Johns?  "Purely acoustic accuracy."

We asked session player and recording engineer Cliff Goldmacher about his experience with these headphones and here's what he said:

"Open back headphones are for critical listening.  That's a different headphone application than the typical recording studio tracking session.   Since I'm also a session guitarist, a lot of my listening situations involve being in front of a beautiful large diaphragm microphone that picks up everything.   In a situation like that, I'll use the Shure SRH440 or SRH840 closed back headphones.  They do a beautiful job of containing the clicktrack or whatever else is going on in my headphones.

But there are certain times when I really want to have a second opinion from the studio monitors  - where sound isolation is not mission critical but detail is critical.  The kind of detail I can get from open back headphones, the kind of response and evenness across the frequency spectrum makes a huge difference.  For me, it's a secondary or a tertiary way of critically listening to mixes so I am sure that the detail is there."

How to Make the Best Choice for Your Application

First of all, let's take a quick look at the other type of headphone: closed back.  These, of course, don't have openings that let sound enter or exit the earcup. This makes them ideal for recording tracks and broadcast applications such as podcasting, because the microphone won't pick up sound that's bleeding from the headphones.

They're also a good choice if you want a private listening experience, since they provide a degree of isolation from what's going on around you, whether it's the ambient noise of an airplane or the television in the next room.

Next, let's assume that you're a recording engineer or an audiophile and you're looking for the accuracy of open back headphones.  Which of the two new Shure models is right for you?  Michael Johns, Product Manager at Shure, provided the guidance.

"SRH1440 headphones have lower impedance and higher sensitivity. That means this headphone can be driven by a consumer electronic or mobile device since it requires less voltage to get the best output. For the consumer, it can be used very well with a portable device."

Choose this one if you are a:    Recording engineer or personal listening user who may want to use them with mobile devices like your smartphone or MP3 player.

"SRH1840 headphones have lower sensitivity and a higher impedance. That means they require more voltage, so they're better suited for professional applications where there's an external amplifier like the kind you'd find in a recording studio or home stereo system."

Choose this one if you are a:   Recording engineer or an audiophile with an external amplifier

When you stop to think about it, headphones are speakers. And according to Michael Johns, there are almost as many types of headphones as there are loudspeakers.  Certainly, Shure's headphone category is growing, from the SRH240 and SRH440 introductions just three years ago to over eight today, including the new open back models.

When those of us old enough to remember think about headphones, we cast our minds back forty years or more, thinking about the "cans" we plugged into our tube amplifiers back at the dorm.  The effect was mind-blowing.

But headphones go back much further than that.

Radio days: Earphones like these were used for broadcast applications.

Here's a helpful cheat sheet just in case you don't know your supra-aurals from your circumaurals.

Circumaural – Headphones that surround the ear. (SRH1440 and SRH1840 are circumaural headphones.)

Open Back -  Headphones that are designed to allow sound to pass through the back of the earcup. The effect is sometimes described as having an open, accurate or natural sound. (Shure  SRH1440 and SRH1840 are examples.)

Noise cancelling – Headphones that reduce unwanted ambient sounds (i.e., acoustic noise) by means of active noise control (ANC). This involves using one or more microphones placed near the ear and electronic circuitry that uses the microphone signal to generate an "anti-noise" signal.

Reference headphones – Professional headphones that accurately reproduce the entire frequency heard by the human ear. (SRH940 is an example.)

Sound-isolating –  Characteristic of earphones or headphones that prevent unwanted sound from entering the ear by physical means – a snug fit, use of foam or other material to reduce ambient noise.

Supra-aural – Headphones that sit on top of the ear.  Walkmans came with this type of headphone in the days before iPods.

Cliff Goldmacher is an engineer, producer and owner of recording studios in Nashville, Tennessee and Sonoma, California. A multi-instrumentalist, Cliff has recorded, played on and produced thousands of demos for major and independent publishers, brand new songwriters and Grammy winners.

Michael Johns is a Product Manager at Shure managing PSM and Headphone products. Michael has a degree in Sound Engineering with a concentration in Recording from Columbia College Chicago. He has also been DJing for over 15 years and specializes in producing "mash-ups" and remixes using software such as Ableton Live and Apple Logic.