Choosing a Saxophone Microphone for Recording and Live Sound 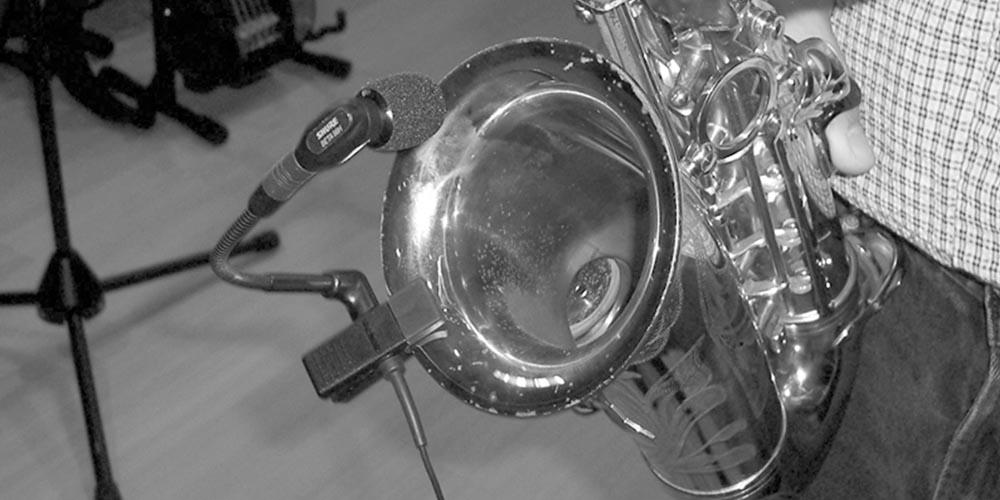 In this post, we're going to turn the spotlight on an essential instrument in the horn section: the saxophone. To help us do it, we've turned to a trio of pros: Adam Hill from Memphis's legendary Ardent Studios (where everyone from Big Star to the Staples Singers and Isaac Hayes has recorded), FOH Engineer Frank Gilbert who mixes sound at Chicago's hippest live music venues and our own Dean Giavaras, a sax player and the chief recording engineer at Shure's state-of-the-art Performance Listening Center.  We also have a couple of useful tips from engineer Matt Defilippis (FOH for The Drive-By Truckers, former house audio tech at The Georgia Theatre in Athens, Georgia) and educator Mike Schulze (trombonist and Audio Production and Recording Technology Lecturer at the University of Denver).

Along the way, we'll illustrate some basic miking techniques for saxophone to help you achieve the sound you're after.

The first saxophone was actually called a bass horn, but by the time Sax patented the design in 1846, the instrument was known as le saxophone or "saxophone".  And while Adolphe didn't live to see his dream of the saxophone as an orchestral instrument realized by the turn of the last century (his prickly personality didn't win him many champions), the saxophone was firmly established as a military band instrument.  And that, of course, led to its discovery by New Orleans musicians as integral to early jazz.

Here's another Sax fact:  Music historians consider Adolphe the father of the "Battle of the Bands", having successfully pitted a military-style band of his own against the French infantry band. He won.

The sound of a saxophone is fairly well distributed between the finger holes and the bell. The bell at the end of the saxophone produces only a part of the sound. Any open hole on the instrument also produces sound. As a result, the saxophone radiates sound in a much wider pattern than brass, for example, and a common technique is to position microphones to pick up sound from the holes and the bell.

DEAN GIAVARAS: That's the crux of miking a saxophone well: recognizing and acknowledging the fact that the sound is a column of air that moves through the horn from the mouthpiece to the end of the bell. For any notes where all the keys aren't closed (high notes especially), much of the sound comes from lowest or last open sound holes on the body of the horn. That's just a fact.  So shoving a microphone straight down the bell of the horn isn't always the best way to do it.

ADAM HILL I've also had luck with placing a mic over the shoulder of the sax player. The bell of the horn, unless it's a soprano is going to be pointed up anyway, and the concept is that you're miking what the horn player is hearing.  They're reacting to what's coming out of the horn. What they're hearing might be the best place to put the mic.

DEAN GIAVARAS: I typically choose a condenser mic like the KSM32 that has a flat or natural sound. A condenser mic has good transient response, so it captures the high frequencies well with less of a hyped response in the highs and mids. It's flatter through that range, which can be more pleasing. Another good choice is a KSM137.  It's a conveniently small condenser microphone that works really well, but in either case, you have to make sure you don't have someone who roams a lot.

ADAM HILL: I usually start with a condenser mic, a large or a small diaphragm condenser. But sometimes you want an in-your-face kind of sound, and sometimes I'll move to a dynamic mic where you can get closer to the bell. In fact, you can bury it right in there as long as you pay attention to key and mouth noise and those kinds of things. That can be for more of a dirty rock-and-roll sax sound instead of the prettier picture that rounds off the edges with a farther-away condenser.

FRANK GILBERT: For saxophones, I almost always use a dynamic mic live. My preference is the good old SM58.

MATT DEFILIPPIS: My favorite sax mic is an SM57. Put it on a straight stand, point it down towards the bell, sounds great. Nuff said.

MIKE SCHULZE: Because these instruments already have lots of energy in the 2–5 kHz range, it's important to use a mic that doesn't overemphasize this range and maybe even de-emphasizes it. You'll probably need a cardioid mic that picks up sound from the front and rejects sound increasingly as you move off to the side. The rest of the decisions you need to make are to insure that you choose a microphone complementary to the already bright sound of horns.

(That doesn't mean there isn't a place for other types.)

DEAN GIAVARAS: Back in the day when they were making the great Blue Note jazz records, Rudy Van Gelder used a distant miking technique where there was maybe one mic in the room for multiple players: an omni. That's a miking technique still used today. It allows you to move around if the room sounds good.

ADAM HILL: I've really gotten into figure-8 miking. I read Recording the Beatles and realized how handy the rejection in the null point can be. So sometimes with a room mic, I'll use a figure-8 configuration and put the sax in the null, so it's rejecting everything that's coming directly from the sax and picking up the sides of the room where the sound is bouncing around.

ADAM HILL: The nice thing about figure-8s is that even if you're pointing right down the bell, it'll capture mainly direct sound so you get that proximity effect, but you also get the back side of the mic picking up a little bit of the reverberant sound in the room, which can make it seem more natural. I like to get that on the recording rather than trying to add it digitally later. Since we have nice rooms here, we use them.

FRANK GILBERT: If you have an energetic sax player who plays a lot of leads and jumps all over the stage, a dynamic mic in a fixed position will not do. Typically this type of player will be using a wireless bodypack transmitter. In this situation a Beta 98 with the gooseneck clip is a great choice. Even though the mic is a condenser, it's small, very directional and the gooseneck attachment enables you to position the capsule far enough inside the horn that the bell will shield feedback potential a bit.

DEAN GIAVARAS: I clip the mic to the bell but aim it at the upper sound holes.   That's how I get the best saxophone sounds. Not all clip-on mics allow you to aim the mic that way.

More than One Mic?

DEAN GIAVARAS: Sometimes, you'll see very elaborate miking set-ups where two mics are used. For instance, I've noticed that Joshua Redman uses a clip-on mic so he has the freedom to move around and get that super-impactful sound from the bell, and a second stationary mic for ballads and more detailed passages that he might walk up to.  This kind of multiple mic approach is not unheard of, but it's much rarer.

ADAM HILL: I've even miked a big, honkin' baritone sax with a room mic, pretty far away and combined it with a close mic, obviously making sure that the phase is good.  Sometimes you want something real roomy. With the direct mic and the room mic, you can adjust the balance when you are mixing.

ADAM HILL: Using a couple of nice condensers in a Blumlein configuration is really cool. It gives you great stereo imaging, and you can adjust the direct and reverberant sound of the room with distance.  I want the horns to get a good balance in the room before the sound even hits the mic. That's why I start by taking a nice picture of it.  I'll put close mics in there to add in a little bit of detail. There are a lot of mixes when I just use the Blumlein technique with a horn trio or quartet.

ADAM HILL: I love ribbons.  I use them on horns, and they're really perfect for that. A ribbon mic can really roll off the high end in a nice pleasing way, and you can get away with putting it closer because it rounds out the sound a little bit.  You don't have that really nasally, wheezy top-end. I'm really thinking about baritone sax here.  I put some of that really nasty rock and roll bari sax on something just last week. Ribbons are great for that kind of stuff – really a great mic for horns.

DEAN GIAVARAS: I also like ribbon mics on horns, more in recording but in live applications as well because they're a lot more durable than most people think.  One thing to keep in mind is that you have to be close enough to a ribbon mic because the figure-8 pattern tends to be pretty closed. That means it has to be placed properly and you have to stay on it. A ribbon or a good dynamic in a stage application is going to work fine.  You can use an SM57 too or a Beta 57 because you're trying to get it to cut through everything else that's going on onstage. A Beta 27 sounds really good to me, too.

FRANK GILBERT: In recording situations where bleed and feedback are not issues, I have had excellent results with large diaphragm condensers such as the KSM32 or its multi-pattern cousin, the KSM44. I especially like the darker KSM32 on baritone sax.

ADAM HILL: I'm lucky. I've done sessions where some of The Memphis Horns were playing. And I've actually assisted in a session where Steve Cropper was producing the horn section overdubs. That was school. I mean, this guy watched Otis do everything. I'm still learning, and I've been here for eleven years.  It's a combination of technical know-how and a lot of creative problem solving.

And check out these publications from Shure: