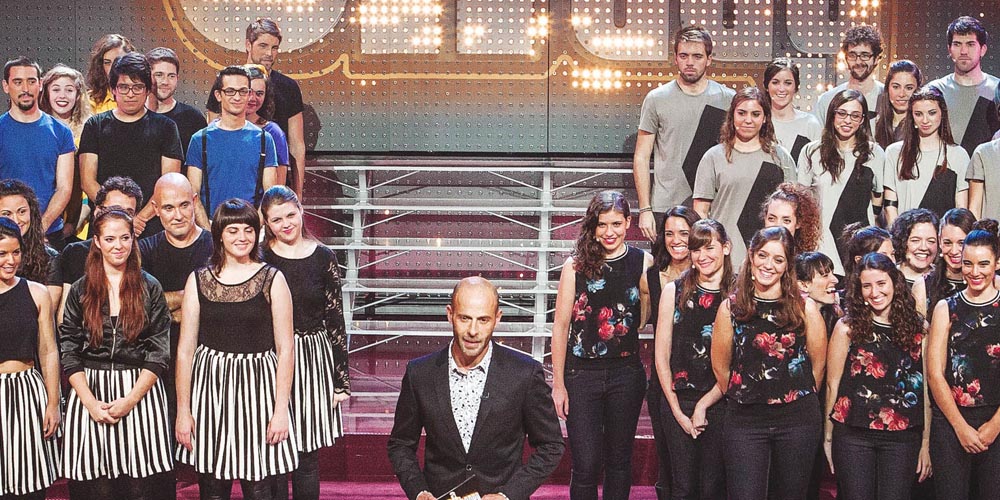 For the engineering department of  "Televisió de Catalunya TV3", the making of the second series of the  choral TV contest "Oh Happy Day!" posed a big challenge, which they met  by using Shure wireless systems.

I think that the whole team did a fabulous job. The challenge was  immense and thanks to the combination of the equipment we had and the  common effort everyone put in, the results were excellent in each of the  shows produced.

With careful planning and use of Shure wireless technology,  namely ULX-D and UHF-R systems, TV3 provided the necessary technical  coverage throughout the latest series of this weekly talent contest.

Based on NBC’s American choral contest "Clash of the Choirs", "Oh  Happy Day!" is a popular Catalan TV show whose second series was  transmitted between September 2014 and January 2015. The program gathers  9 choirs that compete to become the favourite choice of the show’s jury  by performing songs in various styles. The series began with all nine  choirs competing, but one was eliminated each week until there were only  three left. These three choirs then went on to compete in the final  show.

"When we heard about the project and we watched the American version,  we were very surprised. We knew then that we wouldn't be able to cover  the needs of such a show with our gear", said Francesc Salinero, TV3’s  Technical Director. "The choral nature of the show, and the fact that we  had to capture the singing whilst also taking into account  choreographed performances, meant that we needed to be capable of  monitoring the stage perfectly, while simultaneously guaranteeing the  artists complete freedom of movement."

As only one take was allowed per performing choir for time reasons,  retakes were impractical. Francesc and his team needed equipment which  was completely dependable. Moreover, the setup process had to be fast  and safe, because the choirs would perform one after the other with  almost no time in between their performances.

"We had to narrow the production demands and set a limit of two  groups of 20 wireless mics per choir”, continued Francesc. “There were  groups with more than 30 singers and they had to adapt to that.  Furthermore, each program had guest artists or groups that also  performed live and we had to mike them and mix them."

"Due to the quantity of wireless microphones needed — up to 50 — we  had to use digital technology with control software that would allow TV3  to coordinate the frequencies and to monitor RF parameters as well as  battery levels and audio signals. The A/V rental company Twincam Audio  provided us with almost all of their Shure ULX-D1 digital bodypack  transmitters, as well as 10 Shure UR2 handheld transmitters", Francesc  explained. "Then all of our Shure UR4D dual receivers were added and we  got to mike all the choirs, the presenters and the members of the jury."

Shure’s Wireless Workbench software enabled the team to coordinate  the frequencies, to adjust the whole system and to monitor any problems  during the shows. While the soloists used handheld microphones, the  members of the choirs used the bodypack transmitters so that they could  perform their choreographed routines. During the recording, the TV  station deployed a mix for the audience and for the members of the jury.  At the same time every mike was recorded on a multitrack system so that  the signals could be mixed again on transmission. Later, a commercial  CD featuring the best performances was also produced from the same stems  and released in time for Christmas 2014.

The mobility of the performers was one of the biggest challenges TV3  had to face, as Francesc explained. "The monitoring was very demanding,  because every member of the choirs moved throughout the stage. We had to  set up many monitoring sources distributed throughout the stage, and  this generated some conflicts with the lighting equipment that this type  of show needs. We also had to provide the audience with a good sound,  so we had to use more than 40 speakers. Everything was operated from a  central mixing desk which, thanks to its versatility, made the job  easier."

The show that closed the second series of "Oh Happy Day!" took place  in January. It was a special show with a festive and non-competitive  approach in which the participants were children's choirs from all over  Catalonia.

Francesc is very pleased with the outcome of all of the TV3 team’s  effort. "We are already working on the third series of "Oh Happy Day!"  and we are likely to use pretty much the same system configuration we  did for the second edition, after the great results we achieved with it.  The results were very satisfactory, and the equipment used fulfilled  our expectations."