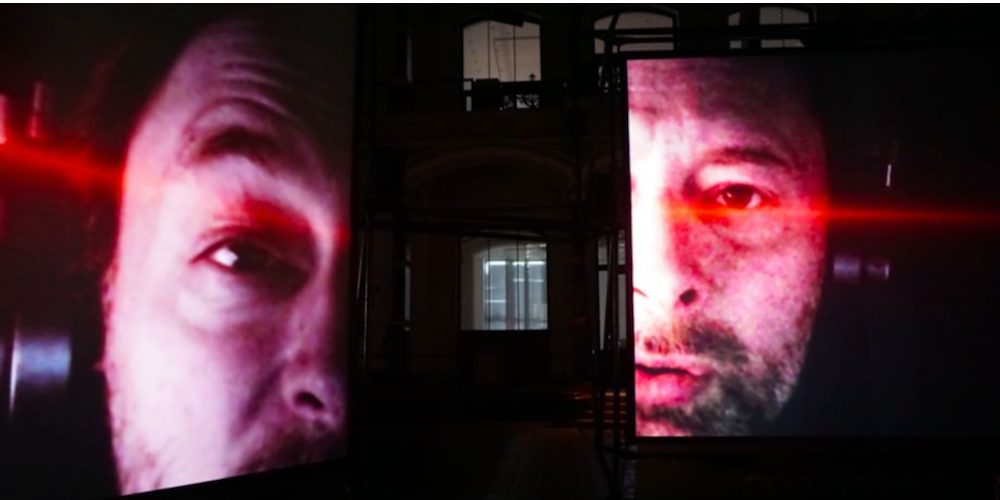 What do you get when you place BRIAN ENO, THOM YORKE and other artists inside a large metal structure fitted with six giant screens and over 50 speakers? An audiovisual revelation. LOUDER enters the Hexadome.

There’s only one Thom Yorke.

Except, of course, when there are six of him. Or 20. Or an infinite number of disembodied, floating and singing iterations of the Radiohead frontman swirling around you.

The Dutch artist, composer and programmer Tarik Barri makes copies of the singer at will inside the Hexadome, an immersive 360-degree audiovisual structure that completely surrounds an audience with the sights and sounds he created in collaboration with Yorke.

“Basically, I’ve got Thom’s head floating around inside my virtual universe,” explains Barri. “I have audiovisual samples of him singing something. And I place that object inside my three-dimensional world.”

Barri’s installation was one of nine original Hexadome compositions shown and performed at Berlin’s Martin Gropius Bau museum in the spring of 2018. (Listen to the Signal Path podcast with Barri here.)

As its name suggests, the Hexadome is comprised of six very large screens affixed to a metal skeleton reminiscent of a gigantic birdcage. The structure delivers auditory input to audience members inside it via a 52-channel sound system designed by the ZKM Institute for Music and Acoustics.

The innovative concept was conceived by the Institute for Sound and Music (ISM), a non-profit initiative based in the German capital dedicated to sound, immersive art and electronic music, in conjunction with the visual arts studio Pfadfinderei.

“This is a long time coming. The technology has reached this pivotal moment,” says ISM director Nick Meehan.

Eno, the famed producer and ambient music pioneer, describes his piece as a generative composition, meaning it is constantly evolving and changing on its own. Herndon, by contrast, staged a performance with live actors demanding the audience inside the Hexadome provide audio samples for an abstract installation crafted by an artificial neural network.

That the artists would produce greatly varying results using the same infrastructure was what the ISM organizers had hoped would happen. But there was no way to know for certain what they would come up with, because the medium conveying their art simply did not exist before.

“When the Hexadome is turned off, it’s apparent what it is physically. But when the artist takes it over it’s very special,” says Meehan. “We are simply providing the format to tell these immersive stories.”

All the artists using the Hexadome are invited to do a several-week residency at the ZKM in the southwestern German city of Karlsruhe to acquaint themselves with how it transports spatialized sound. But Eno opted to compose his work – several times anew – once he got inside the museum in Berlin.

“It was a stunning experience – to see his creative process unfold and take part in what was essentially a private concert with Brian Eno in that gorgeous space,” says Meehan.

The end result is Eno’s work “Empty Formalism,” which consists of slowly altering shapes and colors accompanied by ambient soundscapes that wash over the audience inside the structure.

“What most interests me are color combinations that are so seductively beautiful that you can’t resist them. And then the idea of them disappearing and you knowing you’ll never see them again.”

Stepping inside the Hexadome is a wholly different experience than strapping a set of virtual reality goggles onto your head. And that’s exactly the point: This is meant to be a communal event with others, not something immersive yet isolating.

“I was blown away by how much difference it makes to use these 50-something speakers in this dome construction,” says Barri. “I’ve heard surround sound stuff before, but this was completely different. There are so many specific details in the movements you can hear. There’s an added physicality.”

To navigate the audience though this virtual world, Barri uses Versum, his own special software he has developed over the years. This allows him to use a joystick to steer around and encounter Yorke’s ghostly floating head singing the plaintive line: “I woke up with a feeling that I just can not take.”

Barri says he has a feel for flying in 3D through Yorke’s melodies, but the audience is still free to look in any direction.

“I love when people are immersed in work that I create,” explains Barri. “This immersive state of mind can be invoked through pure music. But it can be more easily invoked when you add visuals to the music. You’re taking over more sensory inputs of the brain.”

The ISM is now planning to take over more brains by bringing the Hexadome to North America in 2019 with a grant from Germany’s cultural organization, the Goethe Institute. Along with the works shown in Berlin, there will be completely new performances and installations by other artists, says Meehan.

“There isn’t a blueprint or map for what you can expect,” he says. “They’re going to interpret their own way.”