All About Wireless: RF System Connectivity 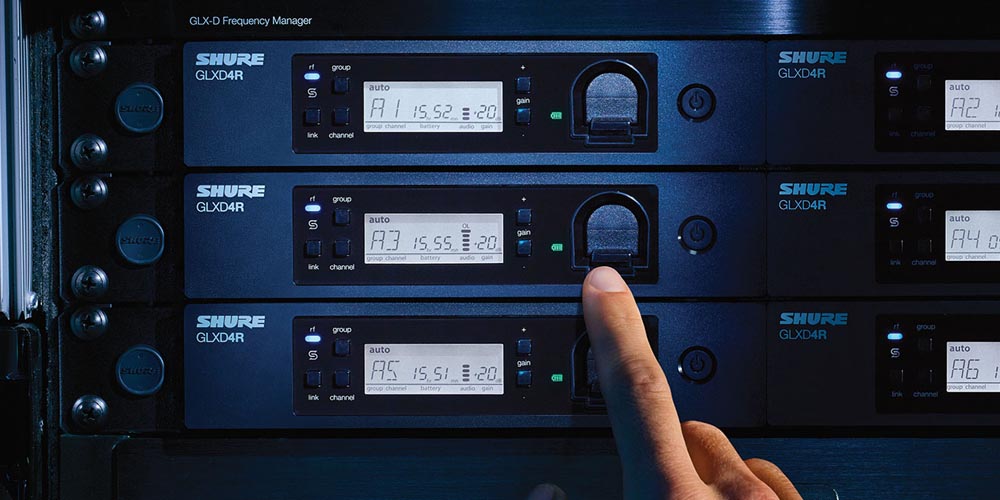 Welcome to the fifth installment of All About Wireless. In this issue, we will focus on RF system connectivity; specifically, best practice recommendations for wireless microphone antenna signal distribution and combining, as well as IEM transmitter combining.

The lack of proper receive antenna signal distribution is a common mistake made in the setup of multi-channel wireless microphone systems. 'Antenna farm' configurations are, unfortunately, quite common in practice. What many don't realize is that antennas can, and do, interact if positioned in close proximity to each other. This interaction can result in a deformation of the polar sensitivity of individual antennas, overloading of receiver front end stages, and the transmission of interfering local oscillator frequencies between receivers.

Passive antenna splitting is a reasonably inexpensive and easily implemented approach. The Shure UA221 is a simple in-line splitter that provides RF impedance matching to limit split loss to 3dB. Multiple in-line passive splits are impractical due to compounding split losses, so this solution is only appropriate for the supply of RF signal to two receivers.

Many mid to high tier wireless microphone receivers feature RF cascade ports, which are used to daisy chain the RF signal between units. If using receivers with this feature, this is a cost-effective approach to signal distribution.

Depending on the receiver model, cascade ports may be passive or active, so it is important to be aware of the limit specified by the manufacturer regarding how many receivers can be included in a single cascade chain. Passive cascade ports will introduce 3dB split loss per hop, whereas active ports provide a unity gain output. Cascade ports continue to operate if recommended limits are exceeded, but considering the noise floor of the RF signal is slightly raised with each hop, and the compounding effect of passive split loss, the signal may become unstable if manufacturer guidelines are not adhered to. Cascade ports may also be band limited, and if so, all receivers in a chain must operate in the same frequency band.

A key risk to this approach is that in the event of power or antenna connection loss to one receiver, all subsequent receivers in the chain may lose signal. Shure, therefore, recommends a conservative approach to RF cascading; the ports are there to be used if necessary, but signal integrity is better maintained by an antenna distribution amplifier.

In situations where multiple pairs of receive antennas are installed to increase the range of a wireless microphone system, antennas may be passively combined to present a single RF input to the receiver or antenna distribution system. The Shure UA221 can be used for this purpose, as can the PA421B and PA821B IEM transmit combiners when set to passive combining mode. A key difference between these units, apart from channel capacity, is that the UA221 provides approximately 15dB isolation between antenna inputs, whereas the PA421B and PA821B provide approximately 60dB of isolation.

If the antennas are located in physically isolated spaces, such as multiple rooms in a Convention Centre, for example, combiner input isolation is not usually critical. However, if multiple antennas are combined when installed in the same physical space, the additional input isolation of the PA421B and PA821B becomes very important.

If multiple receive antennas are combined and interact electronically, they form an array, working together as if they were a single antenna. If physically isolated, the result is typically an extension of range across multiple spaces, with little change in the specified polar sensitivity of each individual antenna. If not physically isolated, as is the case when multiple receive antennas are installed in the same space, electronic interaction can cause the specified polar sensitivity of each to change somewhat. The polar sensitivity of this ad-hoc array can be difficult to predict, so coverage of the space may not be as even as the engineer expects.

Greater combiner input isolation helps to prevent multiple antennas forming an array, minimizing the risk of altering the polar sensitivity of individual antennas and accidentally creating dead zones in areas where good coverage would otherwise be expected. Due to the significantly greater input isolation, Shure recommends using the PA421B or PA821B instead of the UA221 if combining receive antennas installed in the same physical space.

When designing receive antenna systems, it is also important to remain aware of total current draw when using in-line RF amplifiers. Antenna inputs on a receiver or distribution amplifier are rated for a certain maximum current draw, which is often only sufficient to power one or two RF amplifiers. If the use of multiple line amplifiers will exceed this current draw specification, a Bias-Tee with greater current capacity may be required.

In IEM applications, it is equally important to avoid the 'antenna farm' situation. As is the case with receive antennas, multiple closely-spaced transmit antennas will interact, resulting in a deformation of the polar radiation pattern of individual antennas and the generation of high-power intermodulation products. Shure, therefore, recommends the use of active IEM combiners for systems consisting of 3 or more channels, as combiners are designed to suppress the power level of intermodulation products, keeping the signal noise floor to a minimum. Passive combiners are not recommended for IEM systems.

It is important to note that active IEM combiners will have a maximum input power handling specification.  In the case of the Shure PA411 this is 30mW, whereas the PA421B and PA821B support 100mW at each input. It is essential that, in high channel count systems, the outputs of multiple IEM combiners are never actively combined in a master IEM combiner, as the input stages of the master will likely be overloaded. The Shure PA421B and PA821B feature passive expansion ports for this purpose.

These are the key best practices regarding receive antenna signal distribution and combining, and IEM transmitter combining. Next month we will focus on transmission lines, beginning with an explanation of coaxial cable impedance and why 50 ohms is the standard in RF systems.