How to Mic a Bluegrass Band 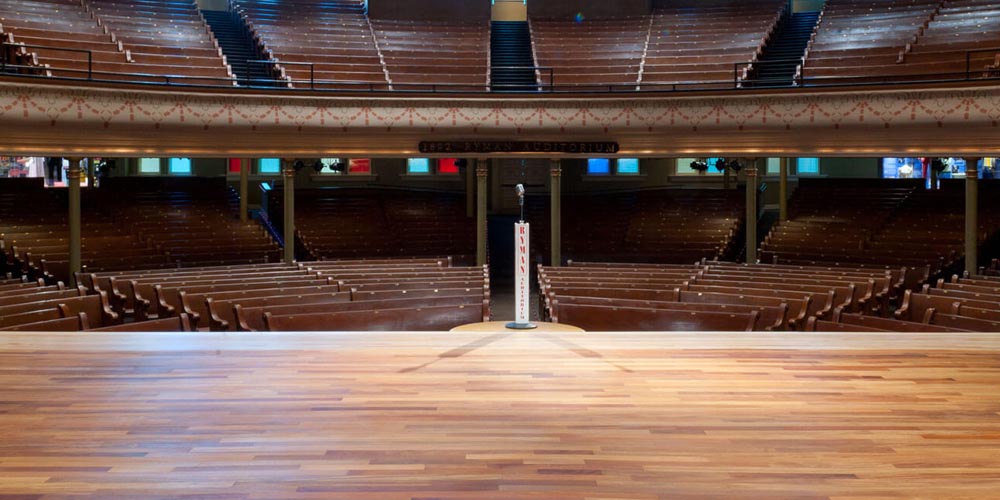 Whether you believe bluegrass was born in 1939 with Bill Monroe and the Blue Grass Boys at the Grand Ole Opry stage in 1939 or in 1945 when the legendary Earl Scruggs joined the band, one thing's for certain: bluegrass music is here to stay and it's more popular than ever.

Blending elements of fiddle tunes and ballads brought over by settlers in the 17th century with folk, gospel and blues, bluegrass music has gone global. Credit the legion of artists and interpreters of the genre (Allison Krauss & Union Station, Rhonda Vincent to name just two) and the power of the Internet to delight audiences with the vocal harmonies and all-string appeal of bluegrass music.

In the early days of bluegrass, band members gathered around a single mic, stepping in and out of the mic's pickup pattern in live performances.  Later on, close miking became the norm.

To understand the difference between these two techniques, we went straight to the experts. Les Banks is Audio Supervisor and Production Manager for the Ryman Auditorium after 30 years as a touring engineer gig for Earl Scruggs, Emmylou Harris, Marty Stuart and lots of others.  Cliff Miller,  founder of SE Systems in NC, has handled live sound for just about every bluegrass act that ever was (including Bill Monroe, The Stanley Brothers, Doc and Merle Watson all the way up to Allison Krauss and Union Station) for over 40 years.

Our experts pegged the genre's special challenges as the ability to capture the individual instruments' resonant characteristics and achieve a natural balance across all the string instruments.   We wanted to know how they do it, so we asked them to share their experiences with both techniques.

Gather 'Round: One or Two Mics

DR: Let's talk about the re-emergence of the single or two mic gather 'round approach. Any tips?

LB: This technique is not for the novice or faint of heart. It requires carefully choreographed movements.  For one thing, band members have to gracefully move in and out of the mic pattern without hitting their band mates in the head with the neck of their instruments.  Del McCoury and his sons have the best technique using one mic or two mics. When all three of them sing vocals, the one with the loudest voice backs away from the mic (usually a KSM32). They mix themselves using few or (more likely) no monitors.

The Ryman is very conducive to bluegrass. One of the greatest shows we did was an "O Brother, Where Art Thou?" live performance (later rebranded as the documentary film "Down from the Mountain") where we used vintage mics in this way.  It was just about the best sound I've ever heard.

CM: The venue is a major consideration. In an environment like an auditorium with a curtain backdrop and flown speakers, you can usually get enough gain out of the microphone with only a high pass filter. When you do that, you're getting the true tones of the instruments while letting the band do the balancing as they hear the PA in the room. There's nothing better.  It's the most beautiful thing you'll ever hear.

But go outside in a shed or amphitheater and it's a different story.  The stage area might have a vinyl backdrop and you start picking up all the crowd noise and the ambient noise.  The sound reflects off the vinyl and the surroundings and while you're trying to get the band up over the crowd, you're amplifying the ambient sound at the same time.  If your bluegrass band is performing in a band shell at an amusement park – and I've had this experience – you can pick up the sound of the roller coaster, generators, and all of that stuff.

DR: Condensers seem to be the go-to type for this application. What do you usually use?

LB:  We generally use a KSM32 and a KSM44A microphone. One is positioned high at the head and mouth level and the other is positioned low at the instrument level. Sometimes, we'll also position a pencil mic like a KSM137 flanking the center position on either side for instrument solos.

CM: Allison Krauss and Union Station have a five-song encore at the end of the night around a single KSM44A large diaphragm mic. It's about as pure and natural as it can possibly be in an auditorium where there's a lot of absorption.

DR: What we tend to see more often on stage is close-miking. What's your experience with this technique in live applications?

CM: Close miking may be better in a situation where you need a lot of gain before feedback.    In that situation, the band can be closer to the loudspeakers and, if necessary, use stage monitors. You can spread the band out a little bit – that always helps with close-miking. However, even close miking suffers from the effects of floor monitors. Sound from the instrument and the delayed reflection off the instrument from wedges cause comb filtering thus changing the tone of the instrument. Using in-ear monitors is not possible for every group, but it will greatly improve the front of house tone and gain before feedback.

The disadvantages of close miking depend on the situation. If the mics are too close together you lose the benefit of isolation, creating a large pick-up pattern, and causing more comb filtering. It is difficult enough to isolate a vocalist and the instrument they're playing. There will be more dependence on the sound person for balance and tone. If you're going for a natural sound the sound person must know what the instruments actually sound like before miking them.

DR: What mics do you typically use?

LB:  Ninety percent of my job at the Ryman is to assist the visiting engineer since most bands bring in their own crew, consoles and gear.  For the individual mic technique, an SM58® or a KSM9 for vocals and a SM57 or a KSM137 for instruments works well.  We've used the KSM9 on instruments, too.

CM: I'm a big Shure fan so I try to use as many Shure mics as I can. With AKUS, we used everything from SM86 to KSM9 for vocals, but found we were picking up too much ambient noise, so we switched to BETA 58A®. I was hesitant at first to switch from the KSM mics but found the sound was much tighter with the 58As, and the band was much happier.

Here's a typical approach for us:

Normally, Jerry will run his Dobro direct thru a Fishman® pedal with his Dobro samples on it.  When we use a mic, we use the KSM32 or KSM44A.

We use a KSM313 – a ribbon mic – on Ron's banjo. It smoothes out the sound of the banjo and has the percussive sound of the instrument without any of the tinniness that you can sometimes get. (No banjo jokes, please!)  That ribbon mic picks up from both sides with one side brighter than the other– so if we were using floor monitors, I wouldn't be able to use it.  I get all the gain I ever need and it has such a nice tone.

Right now, I'm using an old favorite of mine, an AKG C535.  It's a condenser microphone with a lot of proximity effect.  I've used it on the mandolin, too.

Recently, one of our sound engineers used a BETA®98A on the bridge that worked extremely well along with a pickup.  In fact, it had much better low frequency response than I expected.

Allison and the band are all in-ear.  No floor wedges.  One of the first things I did was to spread the band out and separate them enough so that I could get more isolation between the band members. That resulted in no comb filtering, no monitors to try to overcome, little or no EQ.   Plus separating the band members and keeping them as close to the mic as possible when you're close miking gave us a lot of gain. I measured Jerry's Dobro and Ron's banjo at 105 db.   If you get close to them, they're really loud.

CM: There is no right or wrong way. In live sound, there's always more going on than just a band and a PA. There are always going to be compromises that a sound person and the band must make.

LB: Don't be afraid to offer suggestions to younger bands in order to achieve great sound. Let them know if they need to get closer to the mic. Offer suggestions on anything else that might be helpful. Convince the act not to have ridiculously loud monitors as they greatly affect the sound at FOH.

Here at the Ryman, when all the acoustic elements come together, there is nothing greater that having a "goosebump" moment. The band is playing well, they're balanced, miked correctly, and it's the perfect volume at that moment you sit back and let the natural acoustics take over.

Sound is for distribution only. All you're trying to do is translate what's on the stage. You don't need to overpower it – everyone just needs to hear it.  While the techniques vary – there's no real formula.   It's whatever works.