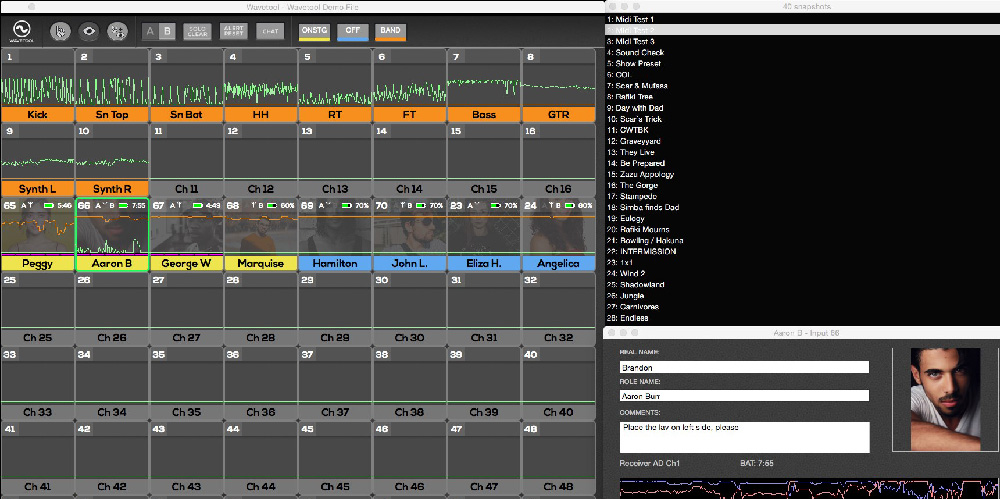 Wireless microphone channel counts have increased dramatically across all production types over the last couple of decades. Theatre is certainly no exception, and arguably, audio production for theatre is one of the most challenging environments for even the most experienced audio engineer.

In a typical West-End theatre production, it is not uncommon to see wireless channel numbers push over 40, and this requires serious communication, planning, and monitoring from the early show design to the final curtain call.

To find out how theatre sound engineers keep their head above water, we spoke to Wavetool CEO, Timo Liski - the man behind what is now regarded as the go-to monitoring software for theatre.

One recurring comment from engineers involved with theatre production—particularly those who've moved from "rock n' roll" to theatre—is the notion that theatre production is very different. "I got involved with theatre sound when our company, Wavemark Ltd started installing sound systems for Finnish theatres," Timo explains. "The equipment used at the time was essentially the same as touring 'rock n' roll' productions, where I originally started out, but the workflow is entirely different. Fast costume changes, for example, make the stage sound crew's daily job very hectic, and in most theatre productions, there's no monitor engineer listening to the audio with a mixing console."

Theatre productions are exceptionally fast-paced, while also attempting to keep a sense of "magic" about the entire production. Generally speaking, the technology behind theatre sound reinforcement is kept hidden wherever possible. Timo adds words to this effect. "To keep the illusion alive, the sound crew can't enter the stage during a show, so all the belt pack or mic changes need to be planned ahead of time—and they always take place off stage. Time is of the essence when it comes to mic checks and small alterations during the show. Also, lavalier mic positions need to remain exactly the same, night-after-night, and throughout the performance. The reason being, unlike rock n’ roll, Sound Number 1s might not be permitted to EQ a channel mid-performance. The tone must stay consistent."

On entering the world of theatre production, Timo was quick to pick up on common practices, and where there might be room for improving production workflow and practices. "When I visited different theatres, I noticed that all the FOH work in-terms of the mixing console and use of QLab playback control was fairly standardised from one theatre to the next. Audio monitoring, on the other hand (especially the radio mic monitoring), was always quite different between the theatres. The solution provided was mostly up to the rental company providing equipment.

"In some cases, S2s (Sound Number 2s), were listening to the audio with headphones plugged into an old analogue console or even directly from the receivers. In some cases, the receivers were placed far from the tech areas, so there was no way to listen to the audio. Some of the most well-known theatre rental companies created their own audio listening solution based on a MADI routing. On top of that, everyone used RF monitoring software from the radio manufacturers and sometimes there were two software packages running simultaneously. (If multiple receiver brands were used in the same setup)."

Knowing the importance of monitoring and communication in pulling off a world-class theatre production, Timo recognized an opportunity to improve common practice. "Our journey towards developing Wavetool started with a MADI routing solution using an open-source iOS app," explains Timo. "At the time, there was no real product available on the market. And we didn't just settle at tackling audio monitoring, we also wanted to see which everyday tasks belonged to the theatre stage sound crew and see if we could bring those tasks under one software solution.

"Like so many software companies in Finland, many of us cut our tech teeth at Nokia mobile phones. Our lead programmer worked there for a fair amount of time, the experience of which helped develop many of the core technologies behind Wavetool. Talking to the people who actually work in theatre every day was, and still is, the key to how we approach software development in terms of feature sets and user interface. We wanted to create a product that solved problems, sometimes even before the problem exists. We want to get close to the people and hear their ideas and opinions about how things should work."

The development of a purpose-built audio monitoring and communication tool for theatre production compliments perfectly with the arrival of modern digital wireless systems. Timo explains how the launch of Wavetool timed perfectly with what was going on across the wider theatre tech industry. "Audio listening is the most important part of a theatre monitoring solution. Wavetool can monitor up to 128 audio channels. Only one multi-channel audio stream (for example Dante, MADI, AVB or a mixture of those) needs to be connected to the master Wavetool computer to allow five sound techs to independently monitor and listen to the audio. We released the first version of Wavetool in Summer 2016, and I feel like the timing couldn't have been better. At the same time, wireless manufacturers began to release receivers with Dante outputs. Dante is very easy to route from the receivers directly to a Mac running Dante Virtual Sound Card and Wavetool.

"Wavetool integrates with the most well-known wireless receivers, showing the user the RF & quality level and transmitter battery status. For us, the fact that Wavetool supports most radio microphone manufacturers is really important. The user might have a preference, budget or some other reason to choose one of the many good receiver models, and their selection does not affect the way the audio is monitored. In addition, by adding Wavetool iOS Remote App—with audio streaming capability—we wanted to make sure that the A2 can be mobile whilst distributing the microphones on stage."

The Shure theatre panel event held at this year's PLASA Show revealed the importance of clear communication across all members of the production team, and how it is paramount to improving the quality of theatre production. For a show to work smoothly, all aspects of the production from the supply of gear to the communication between actors and tech team must be planned and articulated perfectly. Wavetool are doing their bit to help facilitate better communication on the production side. "On top of the audio & RF monitoring features of Wavetool, we wanted to improve the communication for the sound crew by adding a text chat feature. Sometimes it is not possible to talk during the show and this is when the chat feature, with pre-written macro buttons, comes into its own. The chat window also warns the user about possible RF interference or a broken mic cable with a text notification. Wavetool shows the current status of the receivers and audio, but also a five minute history of every channel. This enables the user to go back in time and listen to what just happened 5 minutes ago with Wavetool Instant Replay.

"By integrating all these features into a single software package, we have reduced the need to jump between different applications on multiple screens. This, we believe, allows the sound crew to concentrate on what is happening on stage, instead of the technology."

Theatre productions are booming, and while this is great news for punters and the cultural capital of our great cities, it also comes with some challenges in terms of availability of space, and access to appropriate venues. This, in itself, is a strong argument in favour of continuous improvements when it comes to theatre production workflow. Timo ends by expressing his companies dedication to constant iteration and improvements. "It seems like in both the West End and on Broadway, there are more shows than there are available theatre venues. Larger productions are being squeezed into small venues with less wing space. Also, in this perspective, Wavetool does save lots of space compared to the old MADI/analogue patch-based listening racks—the smallest Wavetool setup being just a MacMini with a touch screen attached.

"Although we have already added many features that assist the stage sound crew in their daily job, I feel like we've just begun, and there are many new ideas based on the requests from the field. We will continue observing closely the workflow of theatre sound crews to develop advanced tools that will make their job easier."