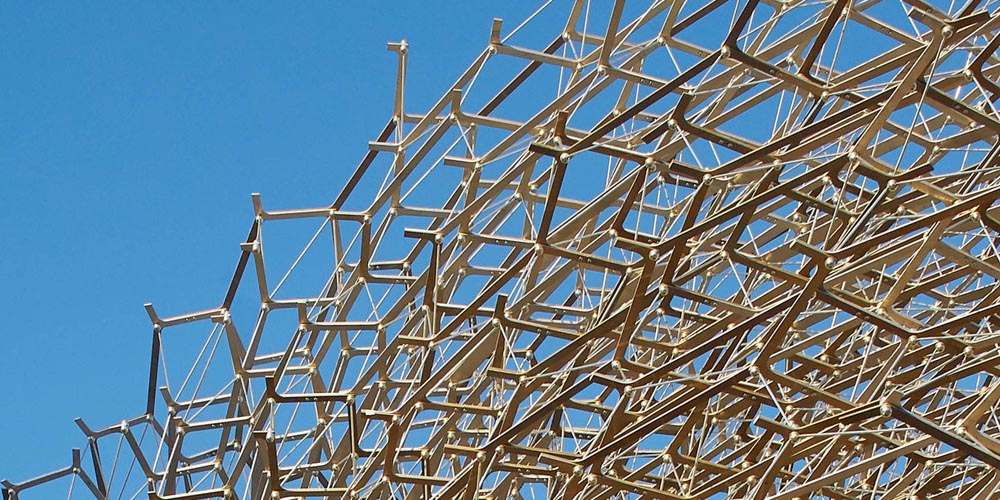 More than 140 countries were represented at the World Expo 2015 in  Milan, which was a platform for the exchange of ideas about food,  stimulating creativity and promoting innovation for a sustainable future  under the overall banner ‘Feeding the Planet, Energy for Life’. In  developing systems to implement the UK Pavilion’s soundscape and  audio-visual elements, Audio-visual consultants and engineering experts  Hoare Lea worked with architects BDP and integrators Stage One amongst  others.

British involvement in the Expo was led by UK Trade and Investment  (UKTI) with support from seven HM Government departments. The UK  Pavilion was designed by award-winning British artist Wolfgang Buttress  to reflect the theme ‘Grown in Britain & Northern Ireland’, and  incorporated visual technology, interactive lighting and sound design, a  360-degree immersive speaker array and musical elements to evoke the  journey of a honey bee through a series of landscapes as visitors passed  through the pavilion. Inside, the pavilion featured a 56-seat  conference suite, 18-seat board room and dining facilities for 24  people.

The Shure Microflex Wireless system was used for sound reinforcement  during presentations in the executive conference centre. According to  Mike Bedford, Principal at Hoare Lea, four mic transmitters were used:  an MXW1 bodypack, an MXW2/VP68 handheld, an MXW8 gooseneck mic and an  MX150B Lavalier. During presentations, the mics transmitted wirelessly  to a four-channel MXWAPT4 transceiver mounted high in the conference  suite. From there, audio passed via the standard Cat 6 cable installed  throughout the Pavilion to the main Shure MXWANI4 four-channel audio  interface in the rack room, and thence through a Shure SCM410e  auto-mixer to consolidate the mic channels before they were fed into the  UK Pavilion's AMX AV control system. Levels were calibrated by Hoare  Lea during commissioning of the system, and then basic mic control was  provided so that individual channels could be muted and unmuted, or have  their levels changed from the main AMX touch-screen interface in the  conference room.

"We selected Shure Microflex Wireless for the UK Pavilion Conference  Centre for a number of reasons," summarises Mike Bedford. "The system  offers a good range of microphone transmitter types with excellent  quality capsules, enabling adaptability with different presentation and  room formats, and being a simple DECT-based system, with the in-room  transceiver running on Cat 6 back to the rack, it was a fast and simple  install."

The UK Pavilion was awarded eight design and international trade  awards, including the Italian Association of Architects award for Best  Pavilion Architecture, the BIE (Bureau International des Expositions)  Gold Medal Award for Best Architecture and Landscape Design at Expo  2015, and the 2015 Blueprint award for the Best Public Use Project with  Public Funding. According to Mike Bedford, the Microflex Wireless  systems were also a great technical success throughout the six-month  Expo. "The feedback we've had on the systems has been excellent — they  met all the requirements, and just worked!"