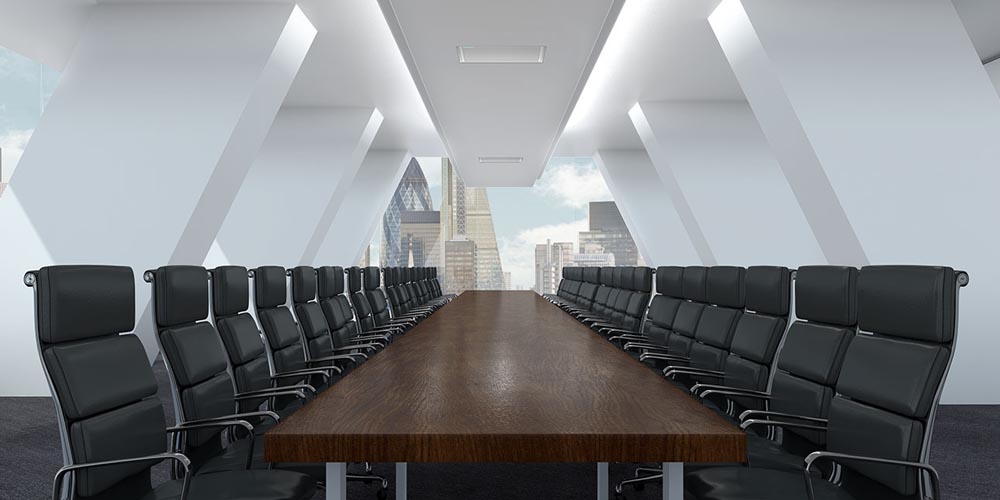 Fewer than two and a half blocks from the location where S. N. Shure opened his first downtown Chicago location in 1925 is the company's new Chicago City Center. A key part of the 35,000-square-foot space in an historic building is its Customer Experience Center.

How Shure arrived at this place is a story of evolution and revolution, success and failure, adaptation and ingenuity that spans nearly fifty years.

It was a different place and time. The legendary SM58®, introduced in 1966, was really starting to catch on for live performances.

But in boardrooms, conference and meeting rooms across the country, the issue of too many open, active mics demanded a solution. Shure engineers answered the call.

While Shure had long supplied microphones for conferencing applications, Voicegate was the company's first attempt to develop a voice-activated system for meetings. Voicegate improved the quality of amplified sound and recordings by limiting the number of open mics in conference rooms where multiple microphones were present.

A Voicegate unit was assigned to each microphone and activated it when the user spoke. Designed for boardrooms, council chambers and meeting facilities – wherever amplification was needed for multiple talkers – VoiceGate, while effective, had limited market success.

According to many people, the name to know in the history of automatic mixers is Dan Dugan. His patents were used for the world's first automatic mixer, the Altec 1607, introduced in the mid 1970s. Originally designed to control open mics in theater applications, the Model 1607 was also used in conference rooms. By the early 1980s, other pro audio manufacturers were entering the automatic mixer market.

Shure responded with the Automatic Microphone System (AMS). It was the first system in the world to integrate specially designed mics with specially designed mixers. Each mic contained two cardioid capsules – one pointed at the talker and one pointed away. When the talker's speech was 9 dB louder in the front capsule compared to the rear capsule, the mixer activated the mic within milliseconds.

Most competitive automatic mixers needed activation thresholds set individually, but the AMS system did it automatically based on the ambient room noise. By the early 1990s, Shure would dominate the automatic mixer market.

Eventually, customers wanted tools to hold meetings with colleagues and customers in remote locations. The Shure AMS system controlled microphones within a room, but it didn't have the ability to send a signal over telephone lines. This marked the beginning of Shure Teleconferencing (ST) product development.

Building on AMS technology, the Shure ST6000 was an all-in-one unit that combined microphones, an automatic mixer, a telephone interface and a power amplifier. Within a couple of years, the ST line expanded to include the plug-and-play tabletop ST3000.

Blue-chip companies and government agencies responded. Shure counted Boeing and NASA among its many customers. Market share was strong.

Thirty years ago, modem manufacturer US Robotics introduced the Link CS1000 digital conferencing unit. Constructed of plastic, the audio quality didn't nearly equal that of Shure models, but it had a distinct price advantage.

There was downward pressure at Shure to respond with a less expensive version. This led to the introduction of the lower-cost ST2500X model.

At the time, Shure's corporate focus was primarily on the development of wireless microphones. Since conferencing and teleconferencing customers were not willing to spend more money for better audio, Shure made a strategic decision. To preserve the integrity and long-established high-quality audio image of the brand, Shure exited the teleconferencing market. The year was 1995 and it was the end an era, but concentrating on professional wireless audio was a superb decision for future success.

In the early days of the new millennium, Shure Europe engineers developed Conference One, a mic and loudspeaker modular tabletop design, based on a form factor popular in Europe. Each ConferenceONE™ module could be voice-activated or manually operated.

Shure was back in the Conferencing business, but sales were sluggish, especially in the United States where systems of this design were not widely employed. Still, ConferenceONE placed these products on the global market. To secure this foothold, Shure purchased the Danish company, DIS (Danish Interpretation Services) for its discussion and conferencing systems in 2011.  It was the beginning of a new chapter.

Armed with the knowledge that AV conferencing often happens in spaces rich in visual aesthetics but poor in acoustic qualities, Shure leveraged its well-established Microflex® microphones as essential components in systems for conference room and meeting environments.

The adoption of all-digital solutions marked another significant change: Decision-making was no longer the purview of audio professionals. The domain now included the IT team.

The easy-to-use system was capable of handling more than 40 microphones in a single space and quickly became the preferred solution for managed AV conferencing in large corporate boardrooms, multi-room environments, and networked campuses. Market response was extremely positive.

Fueled by the success of MXW, Shure launched the premium Microflex Advance ™(MXA) networked microphone array system in 2016. Its patented Steerable Coverage™ digital technology made it possible for nearly invisible ceiling-mounted arrays to effectively pick up the voices of talkers seated or standing in a variety of room sizes and configurations. Low-profile table-mounted arrays were also available for small meeting and huddle rooms. By 2018, this award-winning system had become a market-defining technology and embraced by leading enterprises globally.

The explosive growth of MXW and MXA systems presented a challenge and an opportunity: how best to present the company's industry-leading solutions for corporate conferencing in real-world environments? It was time for a bold move.

Officially opened in May 2018, the Chicago Shure Experience Center welcomed customers to see, hear and test products in areas that reflect their own work habitats. Additional Experience Centers in other regions will bring this experience worldwide. There are interactive demos for end users at the enterprise level as well as the architects, builders, integrators and the AV personnel who design, recommend and maintain enterprise systems.

Looking back over the past 50 years, few could have predicted the technological changes set to alter the pro audio landscape. Or that the company's innovations in automatic microphone mixers would ultimately position Shure as the pre-eminent source for integrated conferencing solutions.

Kevin Smith, Director of Integrated Systems, sees a bright future: "We realized early on the importance of the global customer as an area of opportunity." With offices in the United States, Europe, Hong Kong and other parts of Asia, Shure conferencing products are leading the field in a global marketplace.

One of four Core Values that still guide the company today is an allegiance to manufacturing products of unmatched quality. Our Conferencing solutions add innovation to that pillar; a testament to Mr. Shure's living legacy.