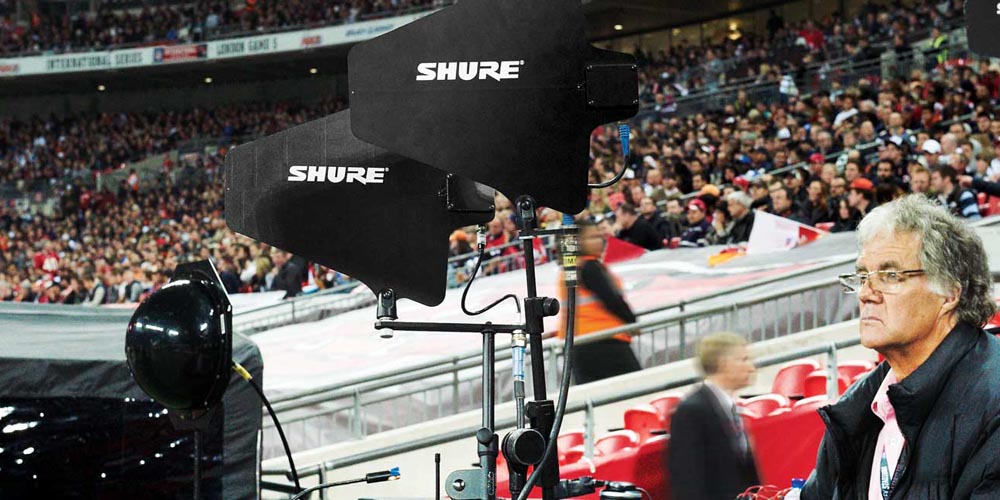 "Receiver antennas are one of the most misunderstood areas of wireless microphone operation."

Credit Shure's Product Support Group with that bold statement. And they ought to know.  They're the ones rivaling Sherlock Holmes in the art of deductive reasoning as it relates to solving dropout mysteries. Many times the culprit turns out to be antenna placement.

Mistakes in antenna selection, placement, or cabling can cause short range, dead spots in the performance area or low signal strength at the receiver that leads to frequent dropouts.

Before we cover placement, let's review the types of antennas you're likely to encounter in a wireless system.

¼-Wave.  This antenna is one-quarter the size of the desired frequency's wavelength.  (Example: A 200 MHz wave has a wavelength of about 6', so a ¼-wave antenna length would need to be approximately 18".) For VHF Applications, an antenna anywhere from 14–18 inches is perfectly appropriate as a 1/4-wave antenna. Since the UHF band covers a much larger range of frequencies than VHF, 1/4-wave antennas can range anywhere from 3 to 6 inches in length, so using the proper length antenna is important.

Tip: 1/4-wave antennas should only be used when they can be mounted directly to the wireless receiver or antenna distribution system; this also includes front-mounted antennas on the rack ears. These antennas require a ground plane for proper reception, which is a reflecting metal surface of approximately the same size as the antenna in at least one dimension. The base of the antenna must be electrically grounded to the receiver.

½ Wave. This antenna is one-half the size of the desired frequency's wavelength. (A 1/2-wave receiver antenna would be about 3 feet long for the 200 MHz wavelength in the example above.)

Tip: A 1/2-wave antenna does not require a ground plane, making it suitable for remote mounting in any location. While there is a theoretical gain of about 3 dB over a 1/4-wave antenna, in practice, this benefit is seldom realized.  There isn't a compelling reason to "upgrade" to a 1/2-wave antenna unless remote antennas are required for the application.

In wireless mic applications, unidirectional antennas are typically only employed in UHF systems. They tend to be frequency-specific, so some care must be taken in selecting the proper antenna to cover the required frequencies. A directional VHF antenna is 3–5 feet wide (just like a roof-mounted television antenna), which makes mounting a mechanically cumbersome task.

The helical antenna is a unidirectional antenna that combines high gain with a wide frequency range. It has a somewhat higher gain than the traditional log periodic or "paddle" antenna (12dBi vs. 7dBi), but it has a narrower coverage angle, typically about 60 degrees compared with 120 degrees for the log periodic.

A unique characteristic of the helical antenna is that it doesn't have a "preferred" polarization angle. It works equally well with antennas that are oriented vertically or horizontally.  For this reason, it has become popular as a wireless in-ear transmitter antenna.

The 'log periodic' or 'paddle style' antenna
The most common directional antenna is the log-periodic type, often called a "paddle" antenna because of its shape.  In the direction of increased sensitivity, the antenna can deliver a stronger signal to the receiver, which can increase the effective range of the system.  At the same time, the antenna can offer some rejection of interfering signals coming from other directions.

Tip: Keep in mind that most directional antennas are wideband devices. They are equally sensitive to all frequencies in their operating band.  This means that a directional antenna aimed at an interfering source will increase the level of that interference as well as whatever desired signal may be in that same direction.  Finally, too much antenna sensitivity (gain) may result in overload of the connected receivers.  This can aggravate intermodulation and actually desensitize the receiver.  For most applications omnidirectional antennas are still the norm.

Modern diversity receivers offer better performance than single-antenna types, but you still need to put the right antennas in the right place to maximize the performance and reliability of the system. Here are some general rules to help you get the best results.