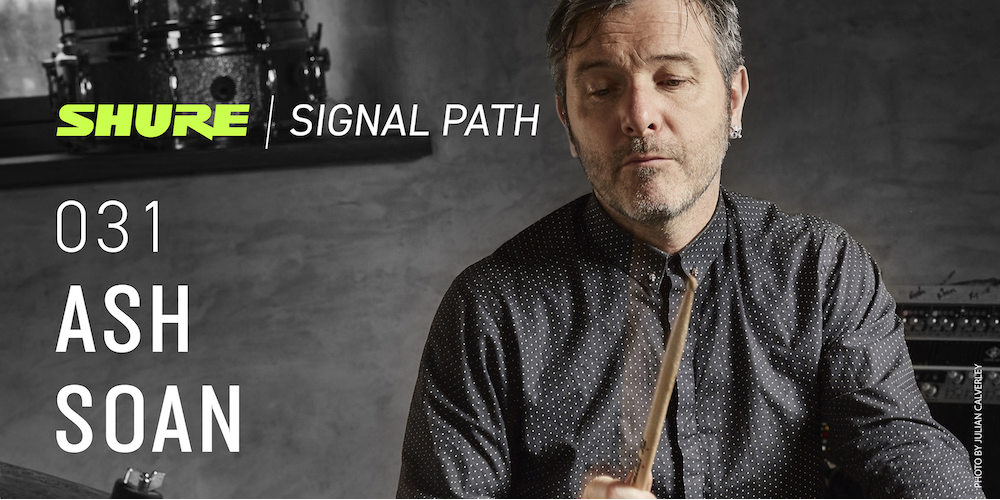 For the latest episode of Signal Path, Marc Young spoke with the highly sought after English sessions drummer Ash Soan about what it takes to be a successful studio musician these days, how social media has helped his career and what it was like judging a drumming competition for Shure.

Marc Young: Ash, we're here at Metropolis Studios for Shure’s Drum Mastery contest and you were on the jury that picked the winner, Daniel Kelly, and running the workshop with him. How is that going?

Ash Soan: Yes, I was part of the prize! It's gone well today. We didn't really have a strict plan of what we were going to do. We had a chat about what he would like to get out of the couple of days. Obviously it’s a fantastic place to record and the facilities are beyond what what you need, really. So we've got everything, we can try everything, sonically. And it's really been interesting to have the luxury of time here to do the things that you can't do and when you're on a session. So it's been really nice, he's been able to talk to the engineer about sounds and it's been, I think, educational for all of us.

How did you actually approach it? Obviously, you were just jamming out a little bit, maybe getting to know each other as drummers. You also do workshops in other contexts...

When I do workshops, they're usually drumming workshops. So this is a sort of crossover because today is about recording and microphones and placement. What’s really nice is to have the engineer today, Paul Norris. It's really great to have that input from someone because we think about our enjoyment in a certain way, we approach it in a certain way. It's really very nice to have a producer's angle and an engineer's angle. It's really nice to listen to engineers, you know, real genuine people that do it for a living day in, day out and stuff. It's been fantastic. Also, (with Daniel) we talked about listening back to yourself and how most people, in the beginning, feel uncomfortable with listening to yourself. For me personally, I've been recording a lot and now I'm okay, I can hear all my misgivings.

It’s interesting you say that as a drummer, because most people who say that might be vocalists. Is it a similar thing?

Exactly. It’s your ideas, it’s your vocabulary, so it kind of is like listening to your own voice. It’s the same for drums and or any instrument and I think people listen back to themselves. Why did I play that? Why did I choose to play that at that moment? that's a really cool experiment.

You were the house drummer for The Voice in the UK for seven seasons. But now you’re focusing on this very successful and very unique studio that you've built.

Right. It’s the bottom of an old windmill in Norfolk. It's about 350 yards from my house, so there's no residential anywhere nearby and I can play anytime. I didn't tell anyone I'd moved from London and that was that was a concern about getting work. Now I seem to be getting work on stuff that I only could've dreamt of a few years ago. I’ve been working with Ed Sheeran, he's down the road in Suffolk, and I was doing some remote sessions for him. That’s the reality of it, I think, what I am doing is been possible. Dropbox is working, people's internet is working, all sorts of communication is working better for people and they are creating like that.

Listen to the full interview with Ash Soan and subscribe to Signal Path with the podcast provider of your choice below. You can check out Ash’s Instagram channel here.