Musings of a Bass Tech 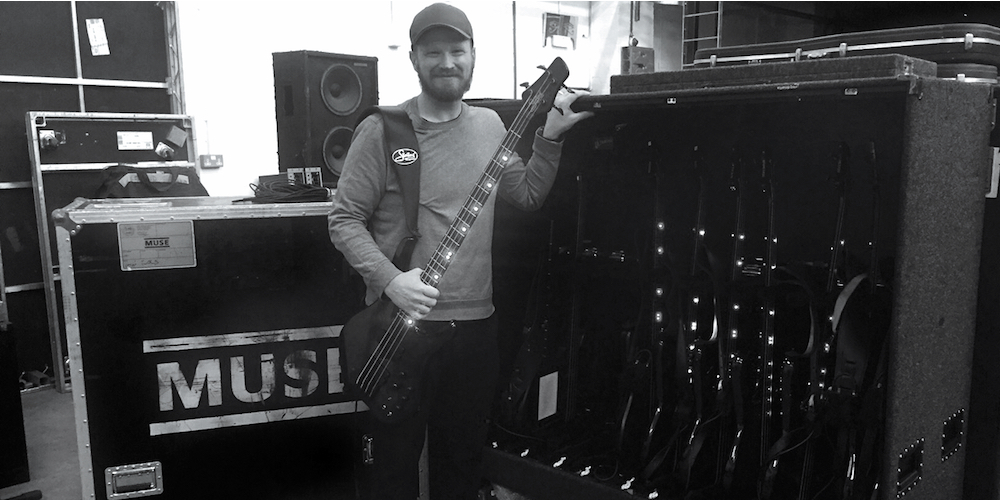 Five amplifiers, 13 basses and over 50 pages of show notes – this is life on the road for JON ASHWORTH, bass technician for the bombastic UK rock band MUSE.

Being a bass tech normally isn’t such a busy gig. You might have one, maybe two instruments to set up, perhaps a distortion pedal to dial in and that’s usually about it. But that’s certainly not the case for Jon Ashworth, who works for Chris Wolstenholme from Muse. Not exactly your average bassist, his intricate and imposing style requires an array of amp settings and an effects setup that would be the envy of even the most elaborate guitarists.

“It’s a pretty complicated rig – the biggest bass one I’ve seen,” says Ashworth when asked to describe the set up. “On the Drones tour he had five bass channels running all at once: a clean amp, a clean DI, two channels of distortion and a high octave channel.”

For those that didn’t see the band’s latest tour, Muse played on a rotating stage, which added a whole new dimension to Ashworth’s job as bass technician. “Chris didn’t want a pedal board up on stage because he moves around all the time, so I had to take care of his effects,” he explains. “It was nerve wracking because I had to make sure I switched the right pedals on, muted his bass between songs, and then switched it back on again. If you mess it up, everyone will hear – so it’s a lot of pressure.”

And that wasn’t the only problem the rotating stage brought up: “Because the stage was rotating we couldn’t put his amp on stage, since it would point at a very specific part of the crowd as it turned. So it had to go in a different room. It actually worked well in America because they were playing Ice Hockey arenas and there was always a referees room near the stage, so we just stuck the amp in there.”

To get all this gear loaded-in, linked-up and line-checked means Ashworth’s day starts a lot earlier than most gig-goers – and certainly well before Chris arrives on the scene. “I’m usually in around 10 or 11am to set up, with sound check around 4pm. People imagine being on tour is this debauched lifestyle, but to be honest I’ve got so much to do there’s not much scope for turning up hung-over. As well as all the amps and effects he used 13 basses on the tour, six per show plus backups and I’ve got to change the strings on all of the ones he used the night before. Because he has such a bright sound each set of strings only lasts about six songs before they’ve got to be switched.”

But how did Ashworth end up working with global superstars Muse in the first place? Like many in the industry he started out as a musician before trying his hand at being a techie. “Most guitar techs start by being in a band, and I’m no different – a frustrated musician. I was in a band called Lucky Thirteen – we did some alright shows but that was about it. I started to realize it wasn’t going anywhere and I was looking for another option. Our band was on the same management as a New York group called Instruction. They had a UK tour with Hell is For Heroes, and I asked if I could go along as their tech. That was in the early 2000s.”

It was a far cry from the big rigs Ashworth works with today. “I was the only tech on the trip, and basically I was the band’s driver and tour manager, too. There wasn’t much to set up – just one guitar each and an amp: after that I was booked by Hell is for Heroes, then the Ordinary Boys then bands like Travis and The Vamps before I ended up with Muse.”

It’s not only the amount (and expense) of the equipment that has changed from his first days with Instruction to his latest gig with Muse: the technology for live sound has completely transformed during that time. “When I started you had deafening wedges on stage. But then in-ear monitors came along, and it makes such a difference having a quiet stage. When I was working with Hell is for Heroes I’d leave with ringing ears every night, and you could easily do permanent damage. When I go to gigs now as a fan the volume drives me mad – it’s just too loud for me!”

Of course, wireless systems aren’t without their challenges – as Ashworth has found out on more than one occasion. “At one gig someone tuned into our wireless frequency during the show so we lost our connection. That’s why we always keep a spare channel just in case…but it’s still pretty stressful if that happens.”

The other major change is the amps themselves. Ten years ago Ashworth would have had been setting up and packing down three or even four amps to cope with Chris’ complicated sonic setup. But now, thanks to amp profilers, he just has one. “They can model any amp sound and they save so much money,” enthuses Ashworth. “Chris still uses a bass amp for the clean sound, but for distorted amps they are perfect. Before they come on tour the band have all their sounds profiled in the studio, so I don’t have to set anything up – just dial them in when they’re needed.”

Amp profilers and in-ears are at the high-end of the tech spectrum, but it is a far less glamorous item that Ashworth considers as his most essential piece of equipment: tuners. “I’ve got a bit of a thing for tuners, I am always buying them,” admits the bass tech. “I use two because I’m always a bit paranoid about one not working. Right now I run a Peterson Strobe tuner and a TC Electronic Polytune Mini simultaneously.”

In fact, he is a bit obsessive when it comes to tuning. “I will tune up until the last possible second while Chris is playing a song – even if I’ve checked it three or four times and I know it can’t have gone out of tune I can never let it go.”

He agrees it’s a like being paranoid about whether you locked the front door of your house: You know that you did, but you just have to go back and check it again. But Ashworth says he doesn’t have a lot to complain about – and wouldn’t swap roles with anyone else on the Drones tour anytime soon.

“To be honest, the basses hold their tune and setup very well: Chris’ Status basses are made of graphite, and are not really affected by temperature. And although I’ve got a lot of effects and amp settings it’s nothing next to what (Muse guitarist) Matt Bellamy’s tech has to cope with. Compared to him, I’ve got it pretty easy.”

This article originally appeared in the print edition of LOUDER Guitar & Bass.