Cooking Up Snackable Tracks with Foodman 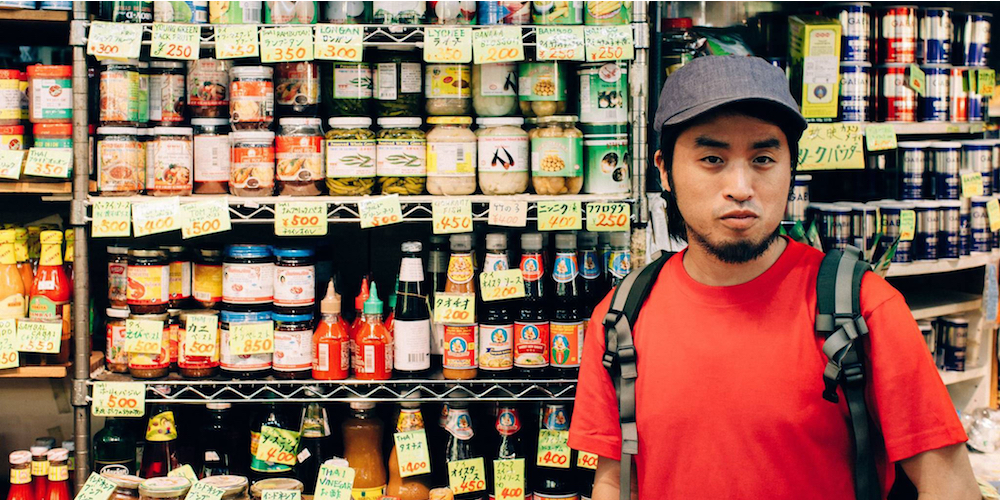 With wide-ranging influences from footwork to J-pop, FOODMAN cooks up tracks by working fast and capturing ideas while they’re fresh. LOUDER takes a peek inside his kitchen of raw sounds.

Foodman, or 食品まつり in Japanese, is a Yokohama-based producer with a sound all his own. A strong advocate for using limitations as a creative catalyst, he spoke to our friends at Ableton about his genre-agnostic approach to music. This interview originally appeared on the Ableton website and in the print version of LOUDER Music Makers Edition.

Do you always start a new track in the same way?

I get bored quickly. There are several ways of making music so that I can keep myself fresh. Sometimes I produce with a sampler and at other times I use Ableton. If I get bored of those, I go to the studio and use my iPhone to record drums, ukulele or voices before I edit those sounds. Sometimes I use them as is. For my last album [Ez Minzoku], I had a concept and made consistent tracks. But before that I tended to put various styles in an album like techno, ambient, songs with backing instruments, noise. I wanted to put many things in since my moods are very changeable.

What was the concept for that album?

When I heard footwork and juke in 2011, I found them interesting and different to the dance music I had known before. To be honest, it is not so important to me whether it is dance music or not. When I first listened to footwork, I thought it was a bit similar to songs I made when I began making music and toying with sounds. It had something primitive that interested me. I wanted to make an album based on a concept in my own way ever since. Ez Minzoku is considered to be centered around a motif of footwork but it is also themed around my imagination of future Nyabinghi [rhythms]. I was imagining what people in the future playing Nyabinghi will sound like. I also had this idea of a very advanced prehistoric human civilization that existed about 10,000 years ago with highly developed social organizations.

The combination of sounds you use is quite unusual.

The combination is always what I care about. I dare to try unusual combinations of sounds that will not seem to get along. I'm not musically trained. I started making music with a sampler I bought, taking in sounds I found. Around that time, I got lost in production, spending eight or ten hours a day. I like that state of fun. I produce in the hope that I get that joy myself again and again rather than getting my music heard by somebody. So what I care about most is whether or not I am having fun. That comes first and then I want my music heard by people. I need to make my mind state primitive in this regard. I wouldn't enjoy myself otherwise.

How do you pick a combination of sounds?

Hmm, how can I explain this? There is a combination of kicks and bass for instance. It sounds good in that way, but I want to replace kicks with snares or swap the traditional roles of sounds. What will happen if I swap all the roles of kicks, snares and hi-hats? I am always thinking things like that all the time. Yesterday, I was wondering what placing a kick in a scale and singing over it would sound like. Nobody decides that kicks must be used to make people dance. You can go your own way scaling kicks and singing with it or you could use hi-hats for the kick’s role. Whether you use a sample pack or whatever, what I want to demonstrate is making changes in traditional roles of sounds and the way you use them.

How does the shape of the track come about?

I lay out various sounds on grids. After that, I work subconsciously. I like green tea and drink a lot of it at home. Its caffeine makes me high and I make music in that state. Above all, I will keep trying until I reach something I am convinced of.

Is it a process of adding layers or taking things away?

Both. Sometimes I add too many layers and then take things out of them. At other times there are few sounds at the beginning. “Jazz,” for example, is a song in which I wanted to make sparse and I was conscious of space while making it. I want to make sounds feel three dimensional. When I put sounds on grids in a sequencer, it looks like they form a pattern. This sound comes from here and that sound comes from there. When a track sounds like a three-dimensional object – that feels right to me. Some tracks use many ingredients and others only a few.

How do you know when you are finished with a track?

In many cases, I don't want to spend much time on a track, so I call it quits if it feels right on a quick listen. Once I think the track is done, I try not to listen back to it. If I did, there would be some part that catches my attention. If I don’t, I forget and move on to the next song. Ears get worn out and how things sound varies depending on your mood and condition. There is no right answer to music. For some people, “Jazz” is not a finished track. I have been told: “Is this song still unfinished?”

When you play live, do you have a different setup or approach?

I do live performance with a slightly different setup. For recent live shows, I use an Electribe and a Mac with Ableton, which I manipulate with a MIDI controller.

Are you recreating studio tracks or are you improvising in front of people?

I combine both. I play pre-released tracks for 10 percent of a live performance. The remaining 90 percent is tracks I prepare a few days before the show. I leave them 60 or 70 percent completed and during the performance I add and take out sounds, apply effects and record sounds to play on the go with the Electribe. I turn the tempo up and down. I only use a few pre-released tracks for live shows. When I do, I play them back and just apply a bit of effects on top. I mainly play what I have prepared at home for the show.

You have played a lot in Europe and North America recently. How are the reactions to your music?

It’s quite different from place to place. In places with big electronic music scenes like Europe, feedback varies. Sometimes they go crazy while, if they simply come and see my gig, they are like “This is not dance music!” upset about my live performance that confounds their expectation for dance music. In the US, on the other hand, there are the parties by DIY cassette labels. Despite their small operation, most of the audience are producers and seem very attentive.

I realize that people have different opinions about my music. I am not negative about it though. Rather, it is interesting to see there are various opinions. My music taste is wide and shallow: I listen to pop and experimental music in equal measure. I don't have likes and dislikes in genres. So it is really fun to do something that goes off the scale.