Biketopia Promotes Pedal Power for the Planet – and Live Music

Biketopia is a traveling music collective using pedal power to raise environmental awareness and amplify their concerts. Shure spoke with the cycling musician-activists during their recent summer tour.

For members of the Biketopia Music Collective, pedal power makes everything possible.

That's because the traveling musicians don't just ride bicycles to get from place to place – they also pedal them to generate all the electricity for their concerts. 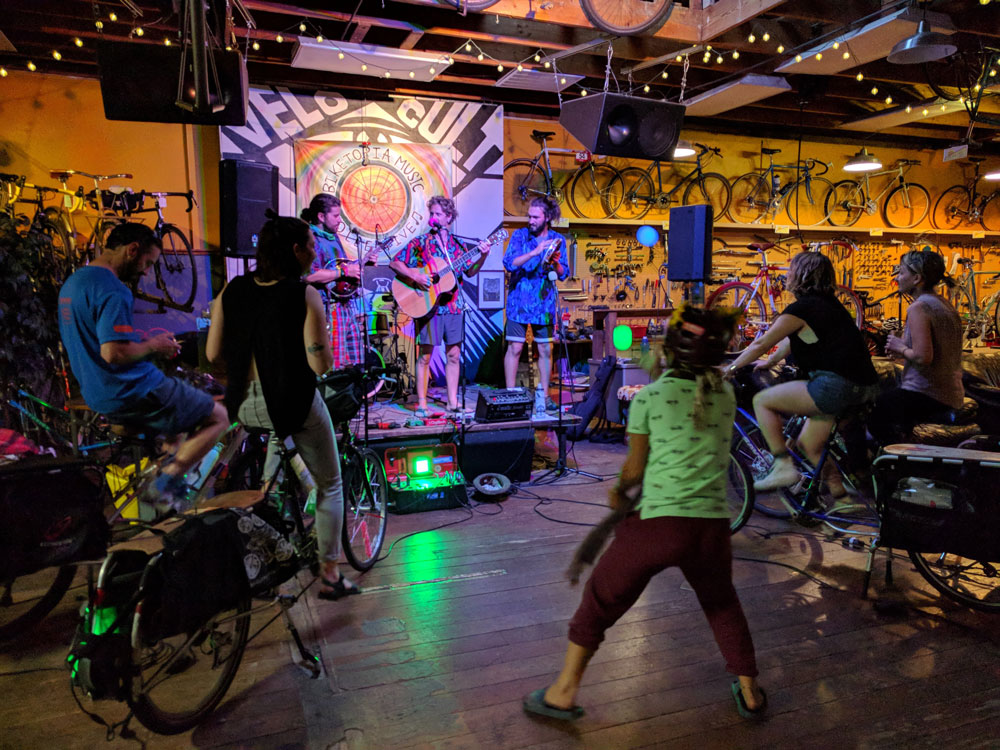 Touring the US West Coast to raise awareness about society's dependency on fossil fuels, Biketopia's focus on sustainability is clear. But scratch the surface, and the relationship between biking, music and environmental activism goes a lot deeper: it's all about community.

"When people are in a community together, they're able to do things like tour by bicycle and put on these pedal-powered shows," says Maisha Lani, a singer-songwriter originally from Hawaii, during a stop in Portland, Oregon.

In many ways, Biketopia resembles a group of modern-day wandering minstrels, traveling the world with all their instruments, performing for their supper and camping or staying with people they meet along the way. The tour from Olympia, Washington to Sebastapol, California is self-sustaining, with all their needs on the road met by what they earn at shows.

Though their tour this summer is shorter than their 2016 trip that covered some 1,400 miles, it's still a major undertaking, especially with all they're carrying. Lani transports all her own camping supplies, plus her guitar, a trumpet and some electrical equipment.

That this is all possible – biking hundreds of miles with hundreds of pounds of gear, surviving on the road with minimal costs, bringing live music to small towns that don't often see it – is itself the message they're spreading.

Of course, the shows Biketopia puts on, run by bikes hooked up to generators, also require some physical effort from the crowd.

"It's very audience participatory. People will jump on the bikes and they help power the [sound] system. They're becoming part of not just the music, but the whole event," explains Lani. 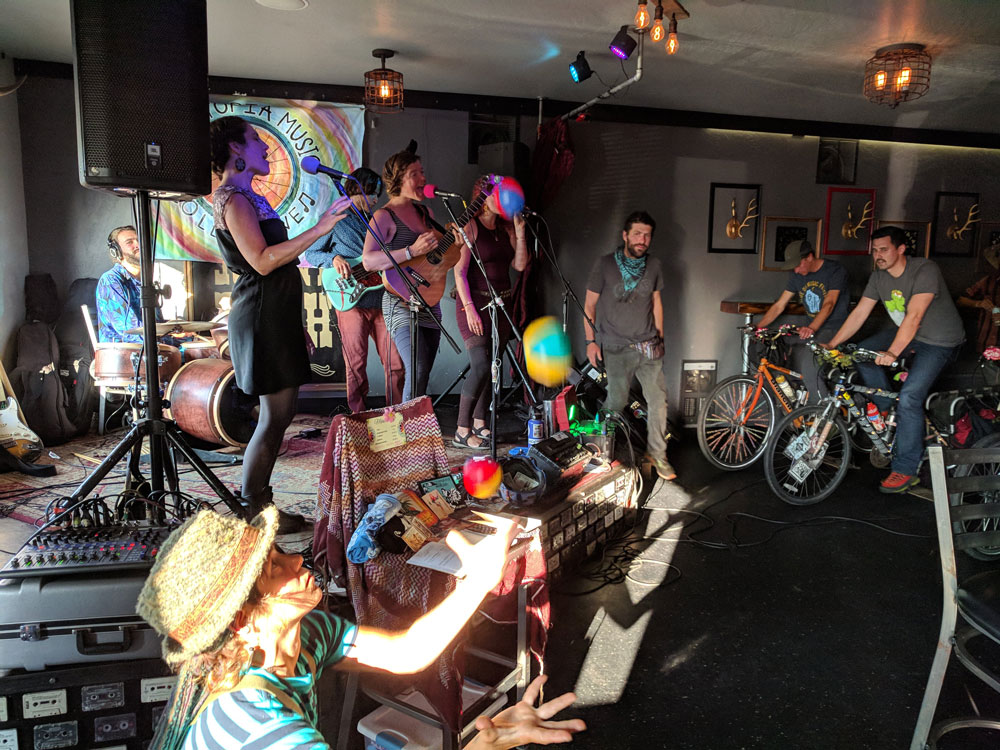 That music is inherently a communal activity is nowhere more evident than in the collaboration and cross-pollination between the various musical projects who make up the collective. Lani performs her own solo music, but also contributes backup vocals to the other groups. In turn, another singer, Heather Normandale, sings backup for Lani.

"There's a lot of that going on in the group because we're all together and it works out," says Lani. "Then sometimes we have people jump on tour, like our friends that have toured with us before, they might jump on for like a week."

Life on the Road

The rhythm of life on the road is simple, sounding almost utopian when Lani describes it. Much of the day is given over to riding, punctuated by stops to take in a beautiful view or cool off at a swimming hole. "We'll stop to make lunch and eat on the road," she says, "and we might have music playing on one of the bikes."

That's not to say it's always easy. Reminders of just how reliant virtually everyone is on fossil fuel-based energy, and how big the task of dismantling that system is, are all around them on the road. They're mostly traveling on highways, after all, and some drivers are none too pleased about encountering a group of ten cyclists hauling bulky cargo.

"There are definitely moments where you have this huge semi [truck] not really giving you much room," says Lani. "But the majority of the time we have a lot of really encouraging people, even drivers specifically, that are hooting and hollering and stoked for us and what we're doing."

When Biketopia arrives in bike-friendly Portland, where they play a show at Velo Cult, a bike shop by day and bar and event space by night, they're right at home. The show feels less like a concert in the traditional sense than an open-invite party. People standing around the room chat as they sway to the music. A woman juggling four glowing balls weaves through the crowd. Somebody's Australian Shepherd is sitting next to a table, taking in the scene. 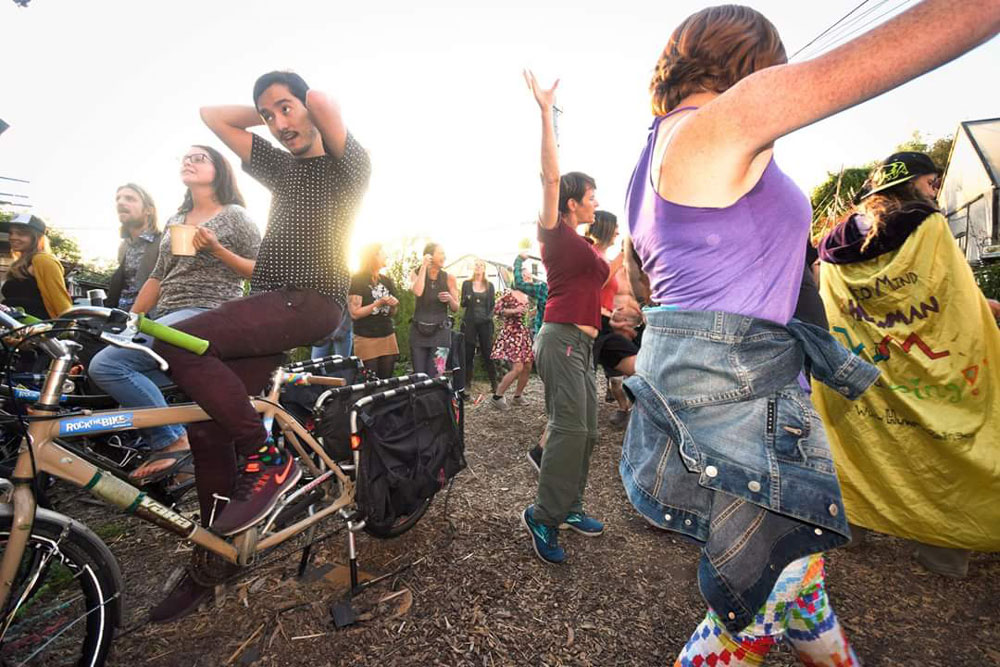 The main attraction is the music, of course, but so too are a handful of bikes, each with a generator hooked up to the sound system, clustered around the stage. The same ones the group rode into town on hauling all their gear.

"Come on, you guys are bike people, take a turn!" one of the musicians says between songs. Obligingly, a few more people hop onboard, pints in hand, and start pedaling. A roots rock band yields the stage to a trio playing Slavic-tinged folk music on mandolin and guitar. A hat for donations gets passed around the room. "So we can make soup!" a guy onstage says. "I love soup. It's like vegetable tea."

After the concert, the group packs up their gear to head south along the Pacific coast – playing music and building community all along the way. 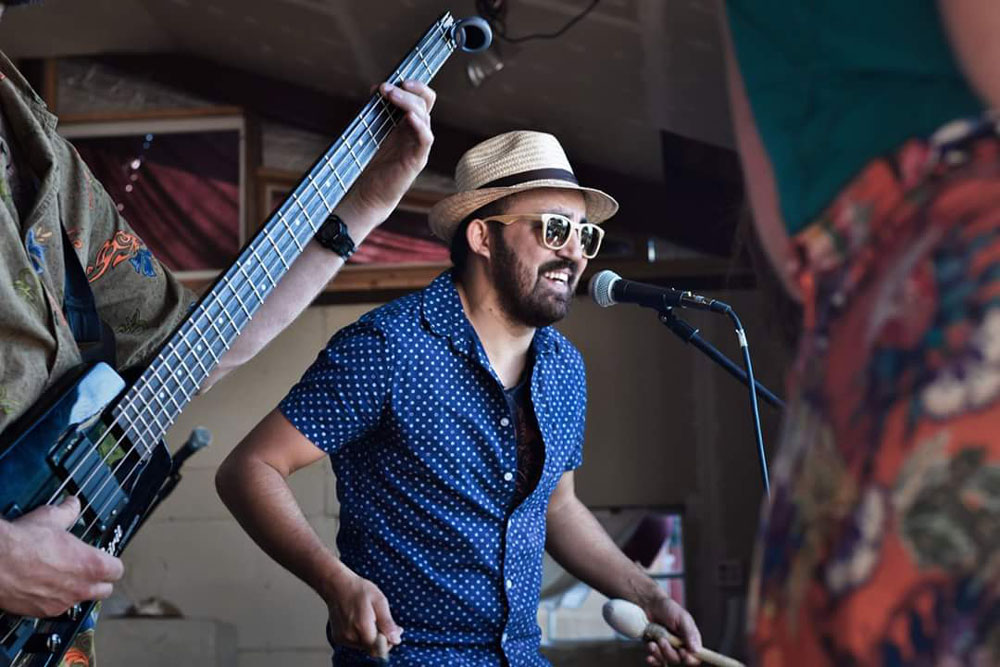 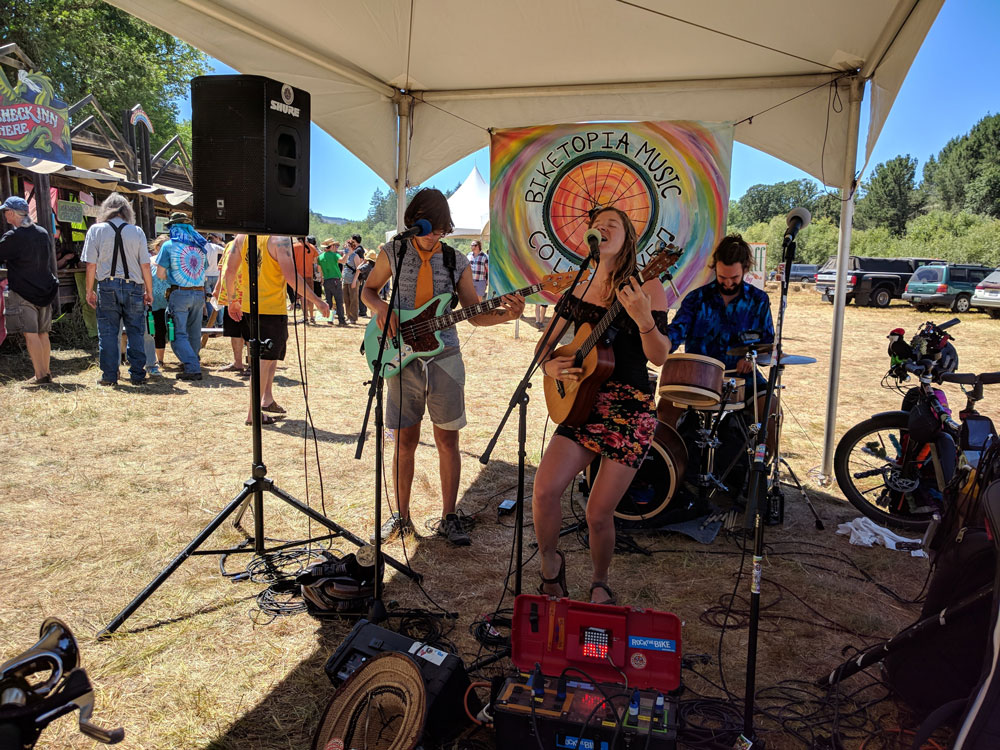 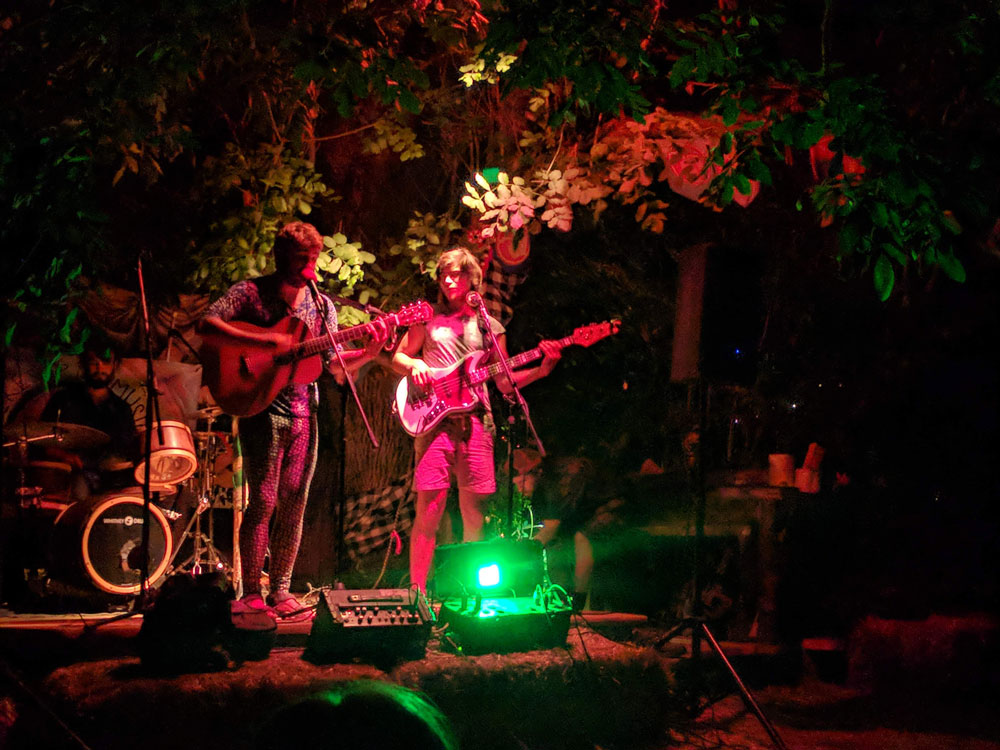