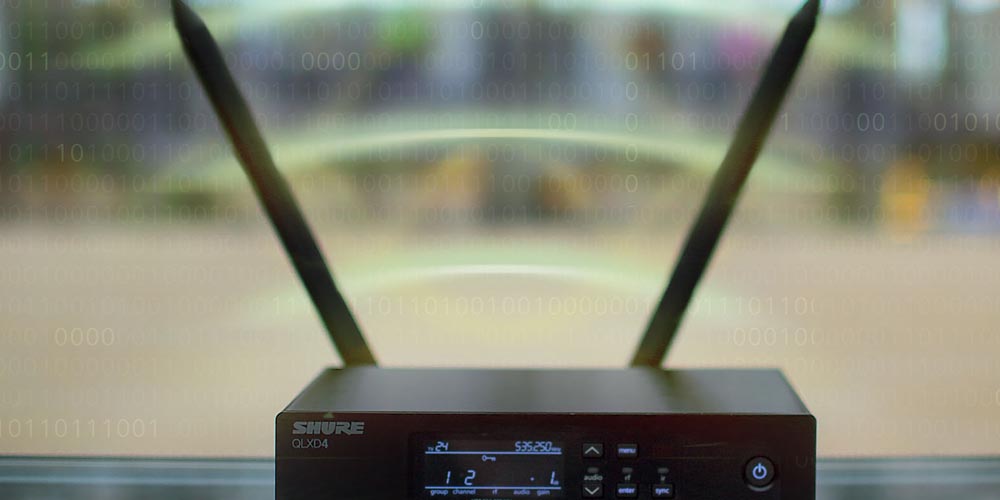 In the audio world, few debates raise blood pressure levels more than the analogue vs digital question. Audio enthusiasts will argue the topic for hours, with the majority of conversations ending with a mixed conclusion of advantages and disadvantages on both sides. The world of wireless microphones is no exception, only in this instance we have the added complication of RF (radio frequencies), which are not the same as audio signals. Therefore, analogue vs digital for wireless is a unique debate in its own right - coming bundled with its own particular set of quirks and misconceptions. Here's what you need to know:

It is difficult to determine which is better from an audio viewpoint, as so many variables come into play. Generally speaking, though, digital systems will tend to have 'better audio' from a dynamic range and frequency perspective. This is because analogue wireless systems need to compress the dynamic range of the audio before it can be carried on a radio wave. Then, once the compressed signal reaches the receiver, the signal is expanded back to an uncompressed audio signal ready for use; the whole process is collectively referred to as companding. More advanced, higher-end wireless systems are typically better at performing the companding process, and subsequently, the issues associated with it are typically more noticeable in cheaper analogue systems.

One aspect of digital systems that tends to worry people is latency. Analogue, of course, has virtually zero latency, while the amount of latency in a digital system can vary depending on the processing qualities of a particular digital system.

Small amounts of latency, however, are tolerable depending on the application. In conferencing applications, latencies of 15 ms or more are common and acceptable. Live performance, on the other hand, is a completely different kettle of fish, as the performer will need to monitor themselves through in-ears or wedges with any significant delay being detrimental to their performance. Low latency is also particularly important for instruments such as guitar, where any substantial delay could completely compromise their timing and performance. When choosing a digital system, pay close attention to latency specifications.

The difference in RF performance depends on what part of RF spectrum the system operates in, and, how spectrally efficient the system is. For example, analogue and digital systems are both able to operate in the UHF band range (470 - 865MHz), but digital wireless systems are much more spectrally efficient in this space. Some digital systems allow up to twice as many compatible microphones in the same RF footprint as their analogue counterpart.

Still, digital does not always mean more wireless channels. Take a digital wireless system operating in the 2.4 GHz range for example. These systems can typically handle a total of 4-5 compatible systems - much less than analogue wireless.

All differences in efficiency aside, it is important to note that RF interference can happen to either analogue or digital systems. In both cases, proper frequency coordination and planning is imperative within the UHF space. You need to avoid interference from TV broadcast and other UHF wireless sources while also selecting a set of frequencies that don't interfere with each other. To make this task simple, we recommend using the freely available Shure Wireless Workbench 6 software.

As a caveat, our digital 2.4GHz example cannot be coordinated using Wireless Workbench, and instead relies on scanning, automatic frequency coordination, and interference avoidance. This level of automation is certainly cheaper and easier, but it also comes with a compromise in channel count.

The 4 points above are just some of the differences between analogue and digital wireless systems. Your selection moving forward will likely be less to do with better or worse, and more to do with which one is right for your application. If all this seems slightly overwhelming, you're not alone. Wireless systems and RF spectrum can seem daunting; couple this with the recent changes to spectrum allocation over recent years and you can easily begin to feel well in over your head.

Nevertheless, wireless microphones are key to modern production values, and learning to operate them reliably has become a key competency for any serious sound engineer. For this reason, we have created 'Losing Your Voice', a resource website for users of wireless systems to stay abreast with the latest changes to RF spectrum. Also, 'Losing Your Voice' links user of wireless systems to the resources and training they need to keep on top of their game. It's your show folks, run it with confidence!