The Art of AV with the Tate's Dan Crompton

“I’ve always been involved in the back room. I like being tucked away in the corner, then making a huge noise at the appropriate moment…”

Tate’s Audio Visual (AV) Services Manager Dan Crompton is reflecting on a career which has taken plenty of twists and turns before landing him at one of the world’s greatest cultural institutions.

Now heading up an AV team and working on everything from high-profile exhibitions to conference audio, it seems a suitable progression from a childhood “surrounded by tape machines, projectors and wires.” With his father, Dennis Crompton, a founding member of Archigram and the pioneering London AV collective Hornsey Light/Sound workshop in the sixties, his future was almost preordained.

Dan’s musical career began after falling in love with the trombone and then working as a sound engineer for a live band (“helping run their sound out of the back of a Ford Transit”) at the point where punk met new wave. Bypassing university, he continued his education by working as an AV technician at a college in central London.

“I set up projectors, PAs, there was a video studio, I was an assistant to the team running the recording sessions in the studio,” explains Dan.

His colorful CV includes teaching music at an arts outreach organization in Camden and touring as part of the brass section for Brit-pop legends Dodgy. Family responsibilities eventually led to his career taking a slightly different turn.

“With two young babies arriving, it meant it was time to get a proper job. I’m still looking for one of those, so in the meantime I got into AV,” he laughs.

“I felt like I had done professional music and didn’t want to get back in the van and go on the road,” he continues. “Audio is at the heart of what I am and do, but I also love moving images. I’ve always seen the bigger picture with sound, quite literally - so I used my industry contacts to get a job in AV.”

After several years freelancing and roles with various academic institutions, Dan saw the vacancy at Tate and landed the job. A desire to work on positive, potentially life-changing projects attracted him to the post.

“I’ve always wanted to be involved in creative work. Community arts was the most meaningful piece of my career. I believe strongly in it, and that’s a big part of what we do at Tate. All my career, I’ve acted as a support technician for creative colleagues, whether they be artists or musicians. But it’s all part of the same thing: you spend your time working on something that brings social and emotional benefits to their audiences.”

Although Dan’s AV experience has previously taken him to the Commonwealth Institute, then the Design Museum in Kensington, Brunel University and the London Business School before his current role, he can trace a line between all of his positions.

“All the technology can change very rapidly, particularly at Tate. But part of the challenge and the joy of working in this is that there’s always something new to understand and get your head round,” he states. And while these work environments are ostensibly different, the challenges and methods he uses to get from A to B are also the same.

“Across all of these positions, we work with microphones, processors and speakers. We work with a source device of some sort, a processor, usually digital now, and an output device like a projector or screen. I think in those terms. Regardless of the sector, however you want to cut it, these component parts of the business echo through everything I’ve done.”

Collaboration is very much at the heart of what Dan works on at Tate, whether between the various departments or his team and the artist or curator. While the creative side is the realm of the latter, responsibility for the nuts and bolts of an exhibition or display lies with Dan and his team: their knowledge and expertise can help enhance artistic expression.

“Curators and artists will have a vision to express, and if we have the right experience, we can contribute this to a project,” says Dan. “For example, how a speaker set up or projector works: this can feed into their end product. We’re about taking people’s ideas and helping them articulate them as best they can.”

So if the role of the AV technician is to help facilitate an artist’s vision, what do these working relationships look like? While a project’s form can vary widely, as can the technical expertise of an artist, the approach for success is usually the same.

“You need to have a conversation with all the participants. Much like being the engineer with a band, it becomes about collaboration and conversation,” Dan explains. “The creators are clear on the art and we’re clear on the logistics. Both sides need to be adaptable so the dialogue usually takes the form of a conversation between people who have enough respect for each other to listen and take on alternative methods.”

The more “out there” an exhibition or display the more Dan and his team need to flex more creative muscles when it comes to AV. At the same time, he believes limits need to be in place to remain true to the art.

“Occasionally we’re tasked with something impossible - such as exploring the concept of the sound made by an inanimate, soundless object like a shoe. But you think ‘this is show business’ so we’ll play with this idea and see if we can simulate the sound. We have to take care to make sure we don’t go too far with it and mock our audience by being inauthentic.”

The technology behind the audio also needs to remain invisible so as not to impact the potency of the exhibit or display. “In this instance, all you want the audience to perceive is the acoustics of the shoe,” continues Dan. “But if you communicate the cleverness of the technological solution behind it, then you’re inauthentic. We strive to help the artists as best we can by offering solutions that they might never have considered but are also a good fit and don’t detract from the art itself.”

Flipping it Upside Down

Working at a place like Tate means that some of the work performed by Dan and his team involves doing things completely opposed to traditional working methods.

“The performance characteristics of a boundary microphone and a studio microphone are totally different as they do different jobs,” says Dan. “The joy of working somewhere like here is you can go ‘why don’t we turn them upside down, use them out of context and see what happens,’” he says.

“So in these ways, we’re exploring the edges of AV technology, and that’s really exciting. It’s this exploration which I really love. We also do a lot of package type work too - setting up presentations, for example. It’s not the sexy stuff everyday in the Turbine Hall, but working on exciting projects is a fairly regular occurrence.”

Other aspects of the AV team’s work include advising on how to enhance the visitor experience as well as working with external suppliers on ensuring that the technology they use is the best available. “We’ve installed some VR systems and the suppliers have helped us get the most out of them. We’re bringing our experience of applying technology in a gallery setting to this collaboration. Working with VR like this is very different to that of the consumer. You can obviously enjoy it in your home but running it in 10-minute slots with nine users for 8 hours daily is something totally different.”

While Tate’s AV team are the experts when it comes to technology, Dan is also keen for artists to use the systems and services in whatever ways they deem fit.

“There are default settings, but when an event happens, the organizers or artist may want to use it in a totally different way. So the speaker performance characteristics can be configured in various ways,” says Dan.

“We can revert to the default but I want the incoming technician to be able to mangle the sound however they want to, as long as they don’t blow our system up or hurt anybody. They can save the setting so they can come back to it a week later.” This collaborative working method goes beyond the headline exhibitions and can be used for conferences or talks at various Tate events.

Dan continues: “I like this individualism, particularly in the age we live in now. In AV, there’s a conformity chain, which is good as it means you know where you stand. But equally, it’s important for people to personalize how they use technology in the same way they personalize their experiences on Twitter, Facebook or YouTube.”

With exhibitions including Olafur Eliasson and upcoming performance artist Pan Daijing at Tate Modern, there’s plenty for Dan to get his audio teeth into. But for him, this is more than just a job. It’s a lifelong obsession with sound.

“I love it, but it’s almost a bit of a joke among my team. I booked two weeks of leave from Tate and went to Michigan in the US to go work on installing audio and video at an exhibition over there. It’s a passion…” 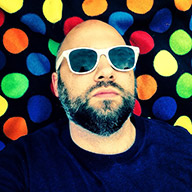