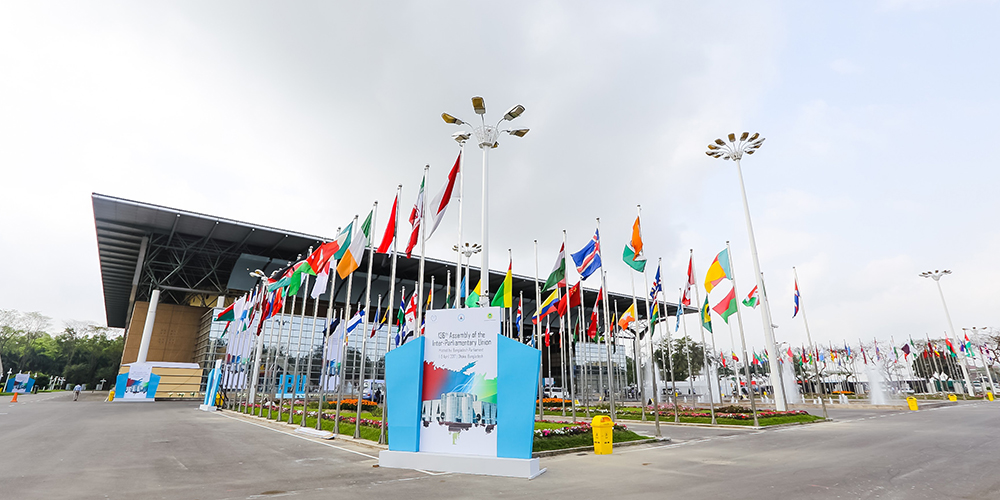 Bangladesh, April 2017 –The Inter-Parliamentary Union (IPU) Assembly is staged twice a year in different cities around the world, bringing together government representatives to explore global issues and make recommendations for action. The 136th IPU Assembly took place at the Bangabandu International Convention Centre in Dhaka, Bangladesh from April 1 to 5, 2017. Jointly organized by IPU and the Bangladesh National Parliament, the event hosted around 1,500 delegates from 131 countries.

Event organizer Asiatic Events brought Thailand-based Shure Conferencing Network (SCN) partner Mighty MICE onboard to support the mega event with simultaneous interpretation and discussion systems. Due to the sheer size of the 136th IPU Assembly – which took place across multiple venues in the convention facility - Might MICE enlisted the assistance from fellow SCN rental partner DLC Events from the UAE to provide equipment and technical support to this high profile event, the first of this scale to be held in Bangladesh. A mammoth solution comprising the Shure DCS 6000 Digital Conference and DIR Digital Infrared Audio Distribution Systems was supplied by the two SCN partners.

For interpretation, 98 Shure IS6132P Interpreter Units were provided in 48 interpretation booths across the venue. To ensure that all delegates could listen to the speakers comfortably and in their preferred language, a total of 2,600 DR6032 Delegate Receivers were available for attendees. Audio from the interpreters was sent via DT6032 Digital Transmitters to 27 units of RA6025 Digital Infrared Radiators which were set up in the various conference halls, each transmitting up to 32 channels of interpreted audio to the Delegate Receivers.

To facilitate communication between delegates and ensure that all conversations could be recorded, the various meeting venues and conference halls were equipped with 450 DC6190P Portable Conference Microphone Units for delegates, as well as 30 DC6990P Portable Touchscreen Conference Units for the chairmen to keep track of the agenda, speak requests and other relevant meeting information.
The conference units were powered and managed by CU6110 Central Control Units, with additional 12 EX6010 Extension Units for additional power supply.

“With the large number of participants from around the world, high performance and quality of the equipment was a must,” recalls Mr. Ja from Mighty MICE. “Of course we also needed qualified technical cooperators to make sure that all equipment was supervised by professionals, so together with DLC Events we brought 13 technical staff to support this event and operate the gear on site.”

Aside from the equipment and technical support needs, a further challenge presented itself due to the location, as Dhaka was new to all parties involved, meaning extra care had to be taken to ensure deadlines were met in regards to logistics and local customs procedures. With the event being of such importance, support was provided by the Bangladesh government and the IPU organising committee, ensuring the equipment was fast tracked through customs in a matter of hours as opposed to weeks.

The SCN partners handling the event received commendation from Sally-Anne Sader, Conference Services Office of the IPU who took “great pleasure to attest to the professional and competent way in which both Mighty MICE and DLC Events undertook the task of ensuring that all the booths and equipment were installed for the Assembly in a timely manner."

“Delivering an event in Dhaka for the first time was a great pleasure and a fantastic opportunity to work in a country whose development has seen so much growth in recent years. It was a learning curve from start to finish but I am proud of the whole team involved from both Thailand and the UAE and we look forwards to returning again later in the year for the next project,” says Mark Breakspear, Project Manager from DLC Events.