How the SM58® Survives the World’s Toughest Tests 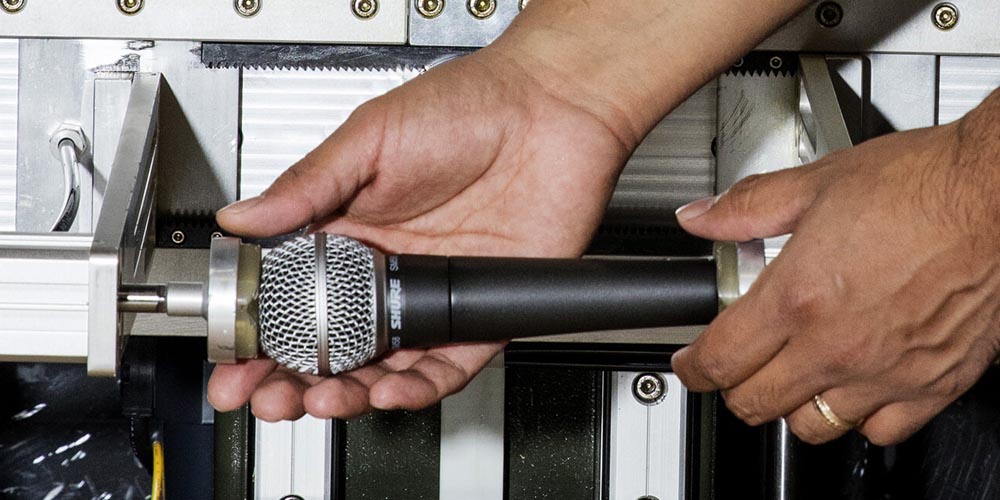 "My singer loves to swing the microphone. This was a house party and there was a ceiling fan running above us. The microphone got caught in the fan, wrapped around a blade, and spun around 2 or 3 times until it got stuck. The fan shook for a second and then spun backwards, shooting the microphone down and smacking it on the floor. The grille was dented but mic worked fine. The fan, though, is a little wobbly now."

This year marks the 50th anniversary of an audio legend known for its time-tested ruggedness. SM58® stories like the one above are not uncommon, and we've heard many of them over the years.

To understand how the SM58 has maintained its reputation for quality and durability, we visited the Quality Laboratory. According to former Chief Engineer Yuri Shulman, standards set there years ago have resulted in "the best microphone we have ever made."

Back in the 1960s, the designers of the SM58 tested hundreds of different combinations of diaphragms, voice coils and magnet assemblies. To ensure durability, each prototype had to survive rigorous quality testing. Dropped, cooked, frozen, submerged in water, screamed into and punished in every conceivable way, the prototypes continued to be refined. Finally, in 1965, Shure brought to market two SM microphones, the SM56 and SM57. The SM58 followed a year later.

Flash-forward 50 years to the Quality Lab in the 65,000 square-foot Shure Technology Annex. Here, periodic quality audits are performed in an anechoic chamber on all Shure microphone models. Frequency response is measured on four different axes to confirm that original specifications are met.

When there are planned changes in component materials or the manufacturing process, microphones must pass these:

The microphone is attached to a mic stand and dropped onto a hardwood surface at different angles of impact.

The microphone is dropped by a machine several times from a significant height onto a hardwood surface. The mic is sound-checked after each drop and checked for any extensive mechanical damage.

The microphone is subjected to prolonged exposure to a salt fog-enclosed environment to ensure that it doesn't rust or degrade prematurely in extremely salty conditions.

The microphone is cycled quickly and repeatedly between extreme high and extreme cold temperatures for several cycles. Its acoustic response performance is checked throughout.

There have been 19 substantial improvements to the SM58 since its introduction, requiring that the mic pass all of these tests each time.

According to Quality Engineer Ken Fadera, rigorous testing in the Quality Lab speaks not only to the world-renowned ruggedness of the SM58 but also to its consistent sound quality. "The quality standards are based on military specifications that date back to Shure's role as a supplier of microphone products to the Armed Forces in WWII," he explained. "Even post-war, Mr. Shure adhered to rigid military specifications…and we still do. We are also continually looking at how the microphone is used from a customer's perspective, working with the Shure Product Validation Lab to develop tests that truly represent what is going on in the field.  If you buy a Shure product, you're going to get the toughest of the tough."

More Tales from the Front

Nothing confirms the durability of the SM58 better than the way the it handles unplanned, unfavorable circumstances in the wild. Below are just a few examples.

The future looked bright for Chicago-based post-punk band Kill Hannah in 2008 as they criss-crossed Europe and the UK on their first overseas tour. They had just released their fifth album and were cruising through the Swiss Alps on the way to Paris when a fire started underneath their double-decker tour bus. The bus burst into flames. Help didn't arrive for 45 minutes; by that time, fire had completely engulfed the bus. The band and crew were able to escape without injury, but just about everything else onboard—wallets, clothing, phones, equipment and luggage—had been fused together by the intense heat.

The band was forced to cancel a few upcoming dates, but they resumed the tour in England once replacement gear arrived. One of the survivors: the band's SM58, charred and smoky, but no worse for the wear.

"What is that thing?"

That's the question that Doug Ryan asked himself as he was driving home in Newfoundland one day in 2005. There it was in the middle of the road, looking something like a microphone.

"As I got closer, I could see it was a Shure," Ryan said. "I decided to stop and pick it up to see if it still worked. I brought it home and tested it by recording some vocals, and it worked perfectly. The fact that this microphone still works after being left in the middle of the road and being run over multiple times by vehicles is a testament to the quality of Shure microphones. You may have seen mics in this shape that have still worked, but I thought it was pretty amazing."

In 2007, Mats Stålbröst and Markus "Majken" Höglund, editors at Sweden's pro audio publication Studio, set out to create the next YouTube sensation. Why not expose a myth about this quality microphone? Mats Stålbröst suggested as a topic "SM58 – The World's Toughest Microphone?"

Unwilling to limit their torture tests to drop tests and beer baths (they did those, too), the pair used the same brave SM58 to hammer a nail into a 2 x 4, survive 24 hours in a 0OF (-18o C) freezer, endure 20 seconds in a microwave set on high, and get run over a few times by a Ford Focus. The mic prevailed, though Mats reported that after the microwave encounter, the SM58 "sounded a little different." After all that, they buried the SM58 outside in Stockholm's less-than-temperate weather. Resurrected a year later, Mats and Majken reported that it sounded just fine.

No one knows where that mic is today. Incidentally, the editors' YouTube dreams came true: the video has generated nearly 400,000 views as of November 2016.

King of the Road

Looking to save some cash, Nashville musician Paul Mills bought a used SM58 in 2004. "Years of touring," he said, "had proven to me that it was a tough, quality microphone, and the industry standard." Things went well for the next three years until the night he left his gig bag leaning against the side of a tour bus.

"The bus driver decided to move the bus and ran over my gig bag," said Mills. "To reposition the bus, he ran over it again." Everything in the bag was ruined: the cords, the stomp boxes…even the SM58. "The outer casing was cracked and falling apart, but I needed the mic that night, so I grabbed a bumper sticker and some tape. It worked perfectly fine." While the deconstructed mic no longer fit into a mic stand, Mills continued to use it for the next three years.

Do you have a story about your SM58?

We'd love to hear from you.