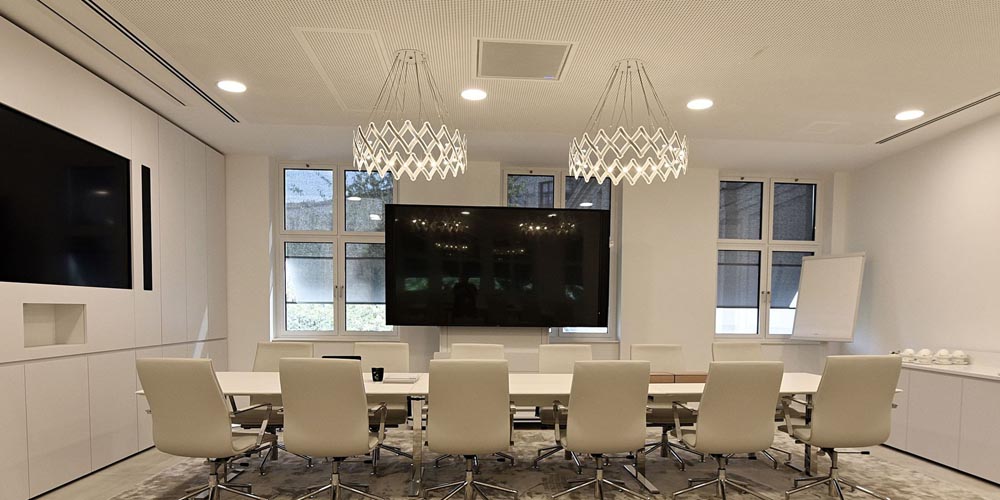 Clifford Chance, an international law firm with over 3,400 legal advisers around the world, is one of the top corporate law practices, with branches in 35 financial and commercial centres in 25 countries globally. In Germany the company has offices in Frankfurt, Düsseldorf and Munich.

Clifford Chance’s Munich offices have eight meeting rooms, two of which (known as "Englischer Garten" and "Münchner Freiheit" after two of Munich’s most popular public spaces, the "English Garden" park and the square where Munich’s most popular Christmas market is held) can be combined into one large conference area or used separately. The audio solution chosen for use in the room needed to be compatible with either room configuration, and to allow the rooms to be split or combined quickly without complicating the switchover.

Local integrator Claus Heinemann Elektroanlagen GmbH was tasked with the installation, and chose Shure’s ceiling microphone array for audio capture in the room(s): in total three Microflex Advance MXA910 ceiling arrays were used throughout the conference area. All three were installed to work together, but can also be operated in isolation if required, depending on how the meeting space is configured. Various presets have been set up to deal with the different possible room configurations, allowing the microphones to be reset for different situations at the touch of a button. For seminars involving presenters or a rotating cast of speakers, a QLX-D digital wireless microphone system was installed with headset microphones and a handheld mic transmitter featuring a Beta 87C capsule.

The networkable Microflex Advance mic arrays provide a logistically flexible, physically elegant audio capture solution that accurately reproduces all the nuances of the human voice across its entire bandwidth. The ceiling arrays allow the company to work more productively, enabling smooth-functioning communication between its employees and clients, no matter whether they’re based in the same building or across the globe. Shure’s intuitive, easy-to-operate Microflex Advance systems allow the staff to concentrate on what’s important — their work — instead of being distracted by the technology.