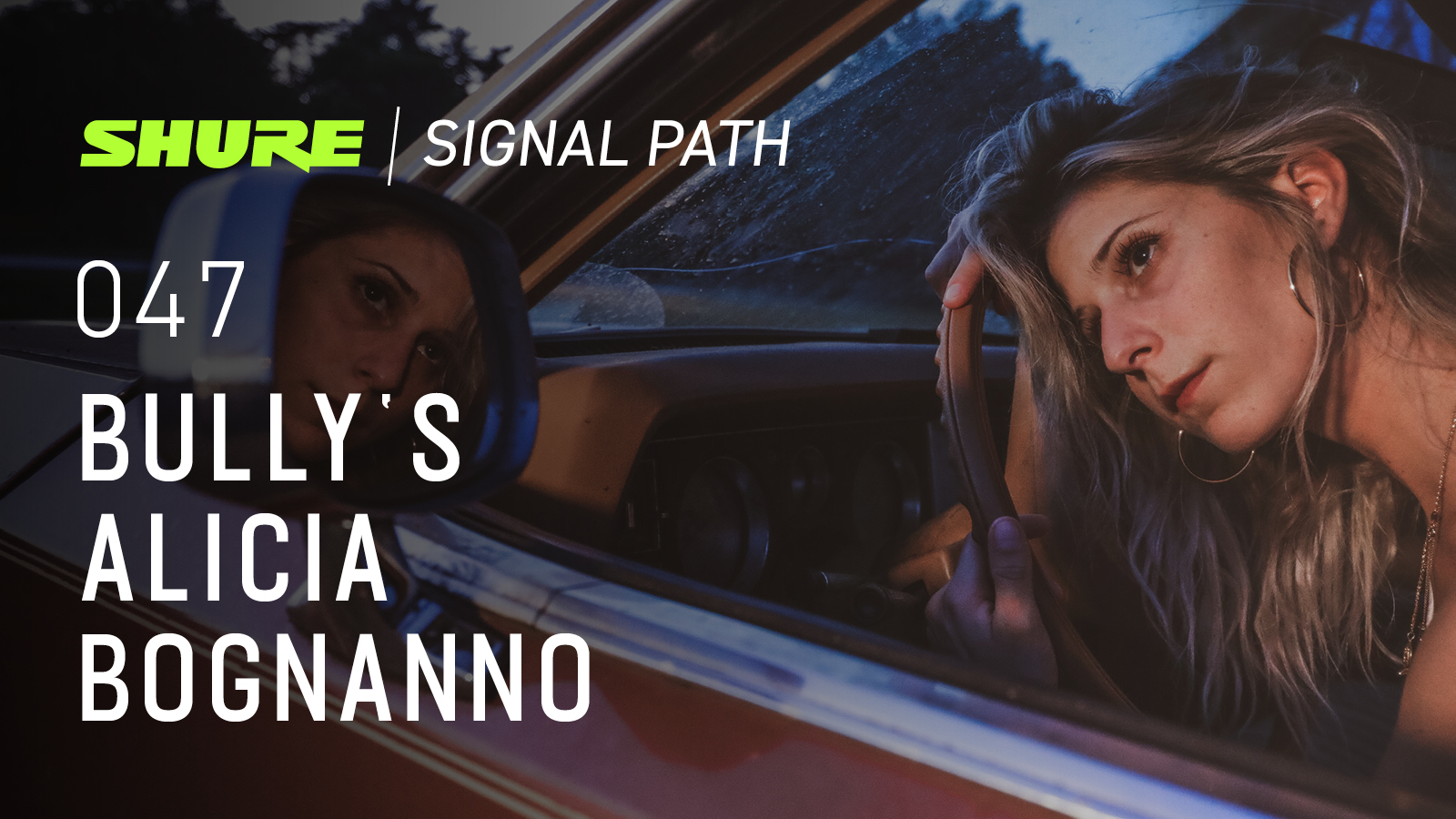 For the latest episode of Signal Path, we spoke with Alicia Bognanno from the indie rock band Bully. In the podcast, she discusses her background in audio engineering, how that's informed her approach to recording music in the studio, and what it was like to release her new album Sugaregg in the middle of the coronavirus pandemic.

Alicia, thanks so much for speaking with me today, you live in Nashville, how is it there right now, all things considered?

Um, you know, it's good. I don't know. There are things that I like about it. And then I've also been thinking a lot about moving just because I've been here for about 12 years now and I never really intended on being here for that long. But it's great. It's a really nice home base if you're touring because, you know, you can have like a house and a yard and have the van and the trailer and you can play music for the most part.

I was like joking with my drummer the other day about we were playing and about I was joking about noise complaints. And I was like, once you start getting noise complaints in East Nashville, that's when, you know, it's just time to go because there's like nobody left here anymore, right? It's a bunch of people coming in from LA and other places. But, uh, no, I like the weather's really nice, and that's my favorite part about it. The weather and my neighbors, obviously,

Most people think of country music when they hear Nashville. But as you know, the scene has outgrown that stereotype long ago. What's it like for a band like yours focused more on indie alternative rock, that kind of stuff?

Yeah, I mean, I've pretty much since I've been here, as have just been around the indie rock scene, and I when I first came here from Murfreesboro, I was running sound at a venue called the Stone Fox, and it was just a small independent venue and it was mostly rock bands coming through. So that was kind of the scene that I was immersed in off the bat. There's still people that did country, of course, but. It was never anything that I was around too much, but there's just so much going on, like all different genres here, that, you know, everybody's kind of got something that they're doing.

And it's still country that’s the biggest thing. I would say the way that it creeps in the most is like the writing style and kind of the format of country music and the Nashville session thing, session musicians.

It's interesting you say that, though, it's not even so much the country music itself. It's more the framework that kind of country music has established there. You're actually from Minnesota originally, is that right? And then you came to Tennessee to study audio engineering. Can you tell us maybe a little bit about how you got into engineering and what led you to pursue a career in the music industry?

Yeah. So, when I was in high school I was just not a good student. I mean, I tried, but I just I struggled with school big time. And so my senior year, I just I wasn't really sure what I was going to do. And about halfway through it, the public school that I went to was allowed to go to this school that we called it the zoo school. It was literally in the zoo.

The students had to, like, help out with zoo chores or it is like an art school. But we just called the zoo school. I mean, maybe it is more of a zoo school than an art school. But anyway they had an audio engineering elective class that we could take and just like kind of set up with the classroom and, I don't know, maybe like 12 different computers with Pro Tools and GarageBand and that sort of software on them, and then there was in a separate room, a console and then a vocal booth, and it was an introduction to audio engineering. I mean, it was so basic, I didn't really learn anything except but got a taste for it. How to make loops in GarageBand and just being around a console in general. But when I did that, I was ecstatic to do that because I've always wanted to be involved in music and then I totally excelled in those classes.

Listen to the full interview with Alicia Bognanno and subscribe to Signal Path with the podcast provider of your choice below.