Inspired by intimate live sets streamed from their Harlem apartment during lockdown, harpist BRANDEE YOUNGER and jazz bassist DEZRON DOUGLAS remotely recorded an entire album with just an iPad and a single microphone.

Like many people in the earliest days of the Covid-19 pandemic, Brandee Younger and Dezron Douglas were just trying to stay sane while cooped up at home with nowhere to go. Both professional musicians, they relied on playing together to keep the creative energy flowing as they waited to work and tour again.

Though they’ve been a couple since meeting 20 years ago at college, Douglas says it wasn’t until quite recently that they decided to perform together publicly: “Playing duo has been something personal between the two of us. It’s pretty much just been a thing that we do in the house.”

Just as they were preparing to change that with a gig at Columbia University in March 2020, the lockdown in New York City upended all their plans. But with their concert repertoire already prepared and a whole lot of free time on their hands, they decided to try something new: a musical brunch, broadcast live from their living room in Harlem.

“We did it with no intention of doing it again,” Younger says. “But we got such a big response,” Douglas adds. So the two combined their musical tastes to find songs that their diverse online audience would like, such as John Coltrane’s ‘Equinox’, and ‘You Make Me Feel Brand New’ by The Stylistics. “People enjoyed it. It was healing for them, but more so it was healing for us,” Douglas explains.

Younger is an accomplished classical and jazz harpist, but she also has a penchant for reimagining pop songs for her instrument. Her unique combination of skills and interests has led to collaborations with artists including Kanye West, Lauryn Hill and Ravi Coltrane. Douglas, meanwhile, has long been firmly situated in the jazz world, playing upright and electric bass with among others Cyrus Chestnut, Louis Hayes and the Trey Anastasio Band over the years.

Their Friday morning performances soon took off and caught the attention of Scottie McNiece, co-founder of the Chicago-based jazz and more recording label, International Anthem. He then approached Younger and Douglas with the unexpected opportunity to turn their weekly shows into a full-fledged album. Force Majeure is enjoyably eclectic listening, featuring songs they’d prepared for that first canceled gig as well as the pandemic-specific original, ‘Toilet Paper Romance’.

Already accustomed to recording both at home and in a studio, Younger did not want any unnecessary complications for the performances. “When International Anthem hit us up, I was like, we’re not changing our setup. I’m gonna record on my iPad,” she says.

So she was ecstatic to find out that the microphone the label sent, the Shure MV88, could do just that. They began recording the brunch sessions, complete with their off-hand jokes and comments to each other. All the while, Dave Vettriano and David Allen from the label helped engineer the record remotely.

“At first, I was thinking, ‘How do I send them a large-diaphragm tube condenser, a fancy mic preamp and interface so they can set it all up in their home?’” admits Allen. But he quickly realized all that gear was going to disturb the casual beauty of the sessions. “We got them to do a few test recordings and move the iPad around the room as a way to control the sound.”

Their minimalist approach still captured the lush sounds of each instrument; the record has the warm, familiar vibe of a salon. According to Younger, she eventually got so into microphone technique that she earned her first ever engineering credit on the album. “Every time I would send Dave the audio, I was like, ‘How did I do? I hope I've made you happy since I'm your apprentice.’”

To get the most out of the diminutive yet powerful stereo condenser mic, they tapped its ability to switch polar patterns and other onboard settings with an app. After some experimentation, Allen and Vettriano opted for a mid-side setup. “That little extra bit of control really made the remote recording work,” says Allen.

Since the recording conditions changed week by week, Vettriano, who mixed the album, relied on the microphone to smooth things out. “It was really helpful to have the mid-side, which I traditionally don’t use a lot in studio recording,” he explains. “It was nice in this scenario just to be able to control the ambiance, or if the left-right balance was a little off, or ground the center and low-end better.”

While the engineering-from-afar on Force Majeure was largely a consequence of the pandemic, Vettriano believes it helped create a better result than might have been otherwise possible.

“It just has this feeling. It’s just them two playing in their living room and it’s really special. I think if we would have tried to do that, even David or I showing up at their apartment with a bunch of mics, it wouldn’t have been the same. It was just this magic that they were able to capture,” Vettriano says.

Younger and Douglas also readily admit that the lockdown sessions enabled them to focus musically on each other in ways that they hadn’t before.

“It forced us to really actually get to know each other's creative process,” Douglas says. “She learned pieces that I liked. And I learned stuff that she liked,” calling Younger “the radio” for her encyclopedic knowledge of pop music.

They also felt somewhat freed from performing the “right” kind of repertoire, a pressure they’ve each felt in the classical and jazz communities.

“It's not about, look at our chops,” Younger says. “It's about, we just do something to make things feel better for the moment. And connecting with people is not about playing what you studied your whole career or did in school.”

She also will no longer be separated from her favorite mic, which was recently updated as the more flexible Shure MV88+ Stereo USB version.

“I literally recorded every track I've done since then on this microphone, in my living room. I love this thing,” Younger says. “I feel like every harpist now has it. Soon as they heard they didn't need an interface or a computer, that was it.”

“That little mic has become her lightsaber,” Douglas jokes. “She’s like Luke Skywalker.” 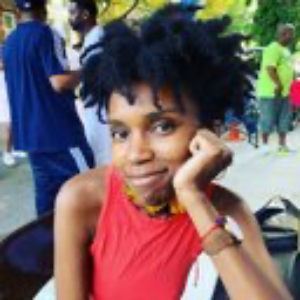 Kyla Marshell is a freelance writer based in New York City. Her essays, poems, interviews and reviews have appeared in The Guardian, Gawker, BuzzFeed, The Believer, Kinfolk, O, the Oprah Magazine, Shondaland, The Ringer, and elsewhere.