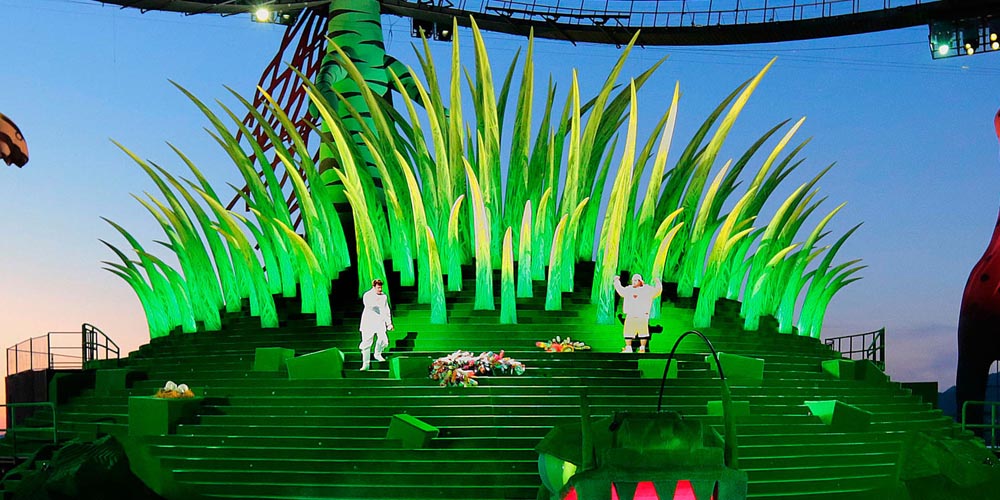 12 channels of Shure's flagship Axient wireless microphone system  have been installed for use at Bregenz's international music and  performing arts festival in Western Austria.

Situated on the stunning shores of Lake Constance, the month-long  annual Bregenz Festival sees the picturesque lakeside town of Bregenz in  Austria taken over by regular theatrical, musical and operatic  productions, with the spectacle of the ‘Spiel auf dem See’ (Music on the  Mere) as its centrepiece, taking place on a gigantic floating stage in  the lake itself.

As with most modern live stage, musical and operatic productions, the  Bregenzer Festspiele has made increasing use of wireless microphone  technology over the years; the consequent lack of requirement for cables  or overhead mics for sound reinforcement has permitted greater freedom  of movement for performers and therefore more ambitious productions.

However, the use of RF at Bregenz has always been constrained by  local environmental factors. The town is very close to borders with  Germany and Switzerland (‘border triangle’), all using radio frequencies  in often conflicting ways. Furthermore, following the shutdown of  analogue television locally and auctioning of the RF spectrum, the range  of frequencies available for use by wireless microphones at Bregenz is  more restricted than ever

Rudolf Illmer - now Head of Sound - has been at the Bregenz Festival  for 27 years, and is used to the problems presented by using RF in the  'border triangle. "It always requires very careful planning when it  comes to spectrum management, and now the plans for the forthcoming  stage 2 of the Digital Dividend will put still more spectrum beyond PMSE  [Programme Making & Special Events] use. Most of our wireless mic  systems are 15 to 20 years old, and we can no longer guarantee that they  will operate free of interference."

Consequently, the period between the end of the 2013 Festival and the  opening of the 2014 event in July saw the beginning of a wholesale  renewal of the wireless systems at Bregenz. "We ran detailed live tests  with systems from all of the major manufacturers," continues Illmer.

"Feedback from our engineers was decisively in favour of [Shure's]  Axient by some margin, due to a variety of factors, including the  clarity of sound, the extensive operating distance, the great range of  frequencies usable by the transmitters and receivers, the intelligent  battery technology, and the ease-of-use with the Wireless Workbench  management software."

All 12 channels of Axient are currently being driven in 10mW mode,  allowing operation over a wide range despite the relatively low power  requirements. Axient systems can also be driven in 50mW mode in the EU  if required, but despite the crowded RF environment, the lower-power  mode has proved sufficient in Bregenz, as Wolfgang Streiter explains.

"Range is an important concern for us — the lake stage is the largest  of its kind in the world, and the singers on it are sometimes  performing at a distance of up to 100 metres from the transmitters.”

The 12 channels of Axient in operation at Bregenz so far are all  being used on the floating lakeside stage, and RF Systems Specialist  Wolfgang Streiter has already noticed the difference. "With the help of  the Spectrum Manager and Wireless Workbench, we now have better control  over what's happening locally in this very critical, demanding RF  environment," he explains. "We rely absolutely on Axient's Interference  Detection & Avoidance mode: during the festival, there are countless  events locally that can cause us problems."