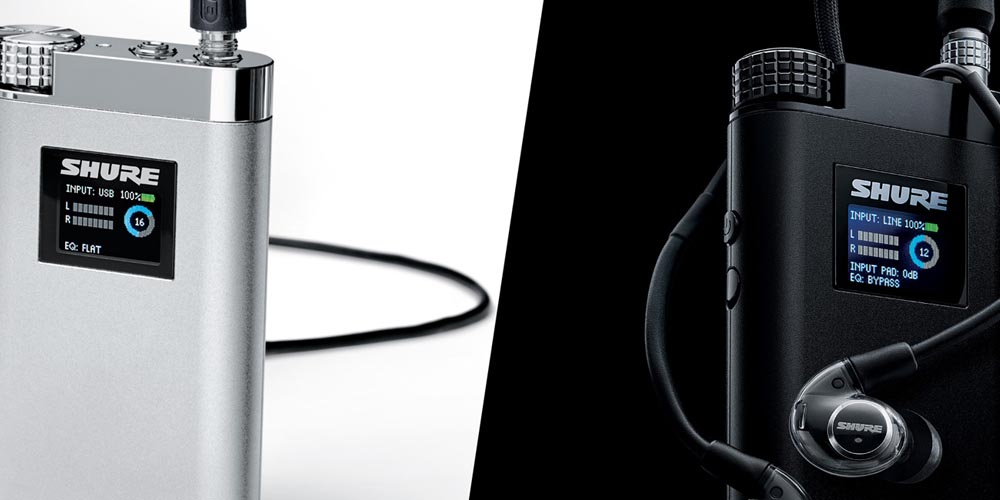 The story of the development of these two premium listening products is rife with both major breakthroughs and huge stumbling blocks that the team thought would derail the whole effort. Product manager Sean Sullivan and engineer Roger Grinnip share the highlights of their eight-year adventure with the project, and how it feels to see the products finally launch into the world outside of Shure HQ.

Premium, high-fidelity audio and portability have been incompatible in the past. The KSE1500 and SHA900 are changing that. How?

SEAN SULLIVAN: Premium portable audio is something that's only recently become available and convenient. As portable digital devices increase in popularity and storage capacity, people are more inclined to store high-quality audio files and take them with them wherever they go. As the technology for those things improves, the demand for high-fidelity listening devices increases.

The KSE1500 is the first time that the level of detail and clarity electrostatic technology provides has been made available in a portable, Sound Isolating™ form factor.

The DAC functionality on both portable amplifiers is also a recent development. People can not only carry these high-definition files with them, but they can also convert that digital audio signal in a high-quality amplifier. Add the electrostatic technology to that, and you have a portable audio experience that has not been available before now. This represents the next step in the evolution of portable audio that's been happening for the past decade.

What were your roles in the development of these products?

ROGER GRINNIP: It started on my bench. I had this feeling of, Hey, let's not talk about it officially, but I've got this idea for something cool we could do, and I don't know if it's really practical. We had the ability to prototype some things on a pretty crude level and get some people to weigh in on the possibilities. So, my role has been to overcome the technical challenges to get it to the finish line. (I'm the engineer. I'm supposed to solve all those problems, right?)

Yeah, Roger was the lead in this project from the beginning. No question. My role has been to steer direction for the details. My team would determine the market requirements, and Roger would figure out a way to fulfill them. Roger's one of those engineers who can translate back and forth between engineering and marketing, which is an amazing quality. We'd try something, then make a change that would have an unexpected impact on another aspect of the product, and then we'd have to figure that out. It was a blast working on it, like an engineering mystery. And as many setbacks as we experienced, there were just as many moments where we'd figure something out, and the project would take a giant leap forward.

Right? The moments when you've solved the problem and you've made something that makes you think, I wouldn't mind listening to this for a while...those times were pretty incredible. The fact that nowhere else in the world was anyone able to listen to what we were hearing was an incredible feeling.

This is the first time electrostatic technology has been used in a Sound Isolating earphone. Why was this previously not possible?

It's not like we discovered some magical property or material that allowed electrostatic transduction to be used in a portable form factor. It's really that we have an engineering team that specializes in making transducers, plus the fact that we're very familiar with working in miniature. We've been making earphones for about 20 years, after all. I can't think of another company with the expertise that would allow them to pull this off.

To make a lot of sound, you need to move a lot of air using a very large surface, so there are some tradeoffs in terms of surface area and size with electrostatic drivers. Typically, electrostatic speakers and headphones are really big, and they're typically dipole. They radiate front and back. That has some disadvantages when reproducing low frequencies because you're creating compression and rarefaction, so the low frequencies end up cancelling. In the KSE1500 earphones, we don't allow that cancellation. The radiation off the back of the diaphragm is actually enclosed and isolated from the front. Then, when you design in all the little bits and pieces that allow electrostatic transduction to work on a miniature scale, you end up eliminating a lot of the original disadvantages.

The earphone portion of the KSE1500 isn't the only major innovation here. The cable is too. What's the story there?

The challenge was to drive the cable capacitance down to the point where we could drive it with our amplifier. That required some fairly significant changes to the way the cable's designed compared to our other earphone cable designs. The minute you take out the things that make our usual design work, you move from having an electrical problem (reducing capacitance) to a mechanical problem because you've greatly reduced the strength of your cable. Add to that the fact that Sean wanted a round cable for comfort in portability even though electrostatic cables are typically flat ribbon cables because their capacitance is low, and you've got a fairly big engineering problem.

There isn't anything magic about the way it was resolved, though. The engineering know-how to create a lower-capacitance cable in a round form factor boils down to doing a little bit of math and understanding how capacitance works. The real trick was building the strength of the cable back up, and that required some iteration and experimentation. Our quality tests are nothing to scoff at, after all. We do terrible things to what would otherwise be perfectly fine cable, and we just had to keep iterating until the cable passed.

The portable DAC amplifier market has grown in the past few years. Had we started out just to make the SHA900 eight years ago, it's likely that nobody would have signed off on it because there wasn't really much of a market for it at that time. Because we were already making the KSE1500 with all the features needed for a standalone portable DAC amplifier, we saw the opportunity to jump in. A lot of what made the portable DAC market grow is the increase in device capacity. Plus, people realized that instead of spending money on a home sound system they never use because they're always on the go, they could invest instead in a portable high-fidelity system.

You can use the SHA900 with any earphone or headphone with a 3.5 mm jack, but are there particular Shure models that you would or wouldn't recommend using with it?

There are a lot of settings that users can control. How did you make the need for that align with portability's demand for quick adjustments?

Portability requires simplicity of operation. When people are controlling a device on the go, they don't want to have to flip it around and hunt for this or that. So, there are two main controls on the KSE1500 amplifier and on the SHA900: a button and a knob. You can pretty much leave it in  your pocket once you know it well enough and control it with one hand. We just had to prioritize the settings that people would most want to control and make those easily accessible. We have a UX group here who did a great job streamlining menu items and navigation steps to make it as easy as possible.

And I tell you, those UX meetings...whew. I mean, I truly appreciate all the added functionality. The first versions of these products were analog in, analog out, and volume control, so it's come a long, long way thanks to the UX folks. What they did is incredibly important and helped make it a great product, but geez. It was a painstaking process.

There were moments in those meetings where I thought, I really need some coffee. But taking a step back from that, and looking at the collection of details that came out of those meetings and seeing how all those little decisions fit together, the process really made a huge difference in the product.

You're absolutely right. It matters quite a bit. In the moment, working on it, you're thinking, Ugh! Enough! but when you go to use the product, it makes all the difference.

Do you suppose the UX team thinks Ugh! about your iterative process?

Both products feature high-resolution 24/96 ADC/DAC, aligning with the Japan Audio Society High-Resolution requirements for both analog-to-digital and digital-to-analog conversion. How did this association come to be? And why 24/96?

We met with the Japan Audio Society. They're a not-for-profit organization, and their goal is to improve the listening experience by improving recording and printing quality for digital audio. What they're trying to do is a good idea and also very difficult. Their principles aligned with ours, so we agreed for our product to feature their logo.

A lot of people ask us why we chose 24/96. It comes down to being portable and maximizing the capacity of iOS and Android devices. The highest output you can get from them is a 24-bit/96 KHz sampling rate. Our choice of DAC/ADC chip met the max standard for output from these portable devices. If we had chosen a chip with a higher sampling rate, we would have sacrificed efficiency and battery life for no real gain.

What's the battery life on these products compared with that of the portable listening devices people will use with them?

What's the benefit of having both DAC and ADC functionality?

Most portable DACs are DACS only. They convert digital audio to analog audio. Ours also has ADC functionality, which is analog-to-digital conversion. It allows you to take that analog signal in, convert it to digital so you can use our DSP, and then convert it back to analog and send it out. So, all the analog playback devices on the market are compatible with our DAC/ADCs and can use our DSP. Most other products can't say the same.

Additionally, those who have high-end digital audio players with analog outputs and source files at higher bit rates can use their players with our devices on the Analog setting, skip the digital signal processing using Bypass mode, and still get the benefits of our amplification and of electrostatic technology in the case of the KSE1500.

How did people react at the October 2015 Tokyo launch?

Tokyo is a big market for high-end portable audio. Almost everyone commutes to work via train and listens to music. The launch event there was everything we hoped it would be. People were even more impressed than I could have imagined. I was so proud to be able to show the products after so many years of development. I don't speak Japanese, but a smile is international. You don't need to speak any particular language to know what it means when somebody's face lights up. They loved it.

So far, the U.S. equivalent was during prototype testing. When you listen to Sound Isolating earphones, you don't know how loud you're speaking. So, I'd hear some colorful language screamed loudly across the project team area, and I'd be thinking, Aha! Somebody just listened to the KSE1500 for the first time.

Check out the KSE1500 and SHA900 pages on shure.com to learn more about the product features, specs and other details.