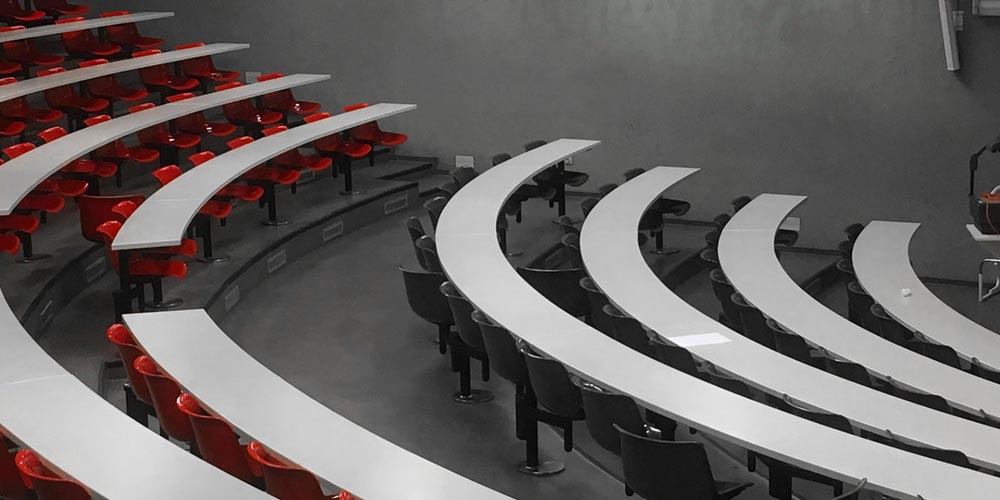 Vives University College, in Flanders, Belgium, employs more than  1200 staff and has more than 13,000 students situated across five  campuses in West Flanders: in Bruges, Courtray, Ostend, Roulers and  Thourout.

The Roulers campus houses a total of 1000 students, and recently  opted to completely upgrade the wireless microphone systems used across  the campus. After testing and tendering, the university elected to use  Shure Microflex Wireless systems throughout, supplied by Bruges-based  audio-visual installer Deltavox Projects.

The university’s stated requirements for the new wireless system was  one that was easy to use but would offer excellent sound quality and  seamless operation without interference. The winning system would employ  internal batteries for the transmitters (following concerns about  battery life with previous systems at the campus), and would be easy to  expand in the future.

Home supplier Deltavox was given the task of finding a solution, and  proposed Microflex Wireless as a system that would meet all of the  university’s criteria.

The seminar rooms and theatres are each equipped with an Access Point  Transceiver (MXWAPT) and a single or dual set of transmitters,  consisting in each case of a handheld microphone, a bodypack with a  headset and matching charging stations (MXWNCS). The lecterns in the  theatres are also fitted with wired Microflex gooseneck microphones.

Deltavox CEO Johan Missault admits that his company were newcomers to  Shure’s Microflex Wireless. However, as he explains, "because of the  system's features and operation on DECT systems, we decided this was the  best solution." The fact that the system was also easily capable of  future expansion also played a role: because the MXW system has two-,  four-, or eight-channel expansion options up to a maximum of 80  channels, the remaining classrooms can also be fitted with Microflex  Wireless in future without difficulty.

Since the installation, the new wireless systems have been free from  interference as required, as MXW’s automatic frequency coordination  ensures continuous use of clean, interference-free RF. Transmitters with  flat batteries are also a thing of the past with MXW’s advanced Lithium  ion rechargeable batteries, which have an operating life of up to nine  hours’ continuous use, and can be fully charged in 2 hours, with the  charging status visible at all times on the charging station. The  overcharge protection ensures extended battery lifetime.

The University’s teaching staff have professed themselves happy with  the system because it is so simple to use: using a wireless microphone  is a simple matter of picking up a transmitter from the charging station  and pressing the push-to-talk button. More complex system settings can  be adjusted by the system’s administrators via MXW’s easy-to-use  browser-based GUI.

According to Vives University’s AV and IT administrators, the system  is also easier to maintain than previous infrastructure, allowing them  to work more efficiently.