The Sounds Around You: A Mobile Recording Workshop 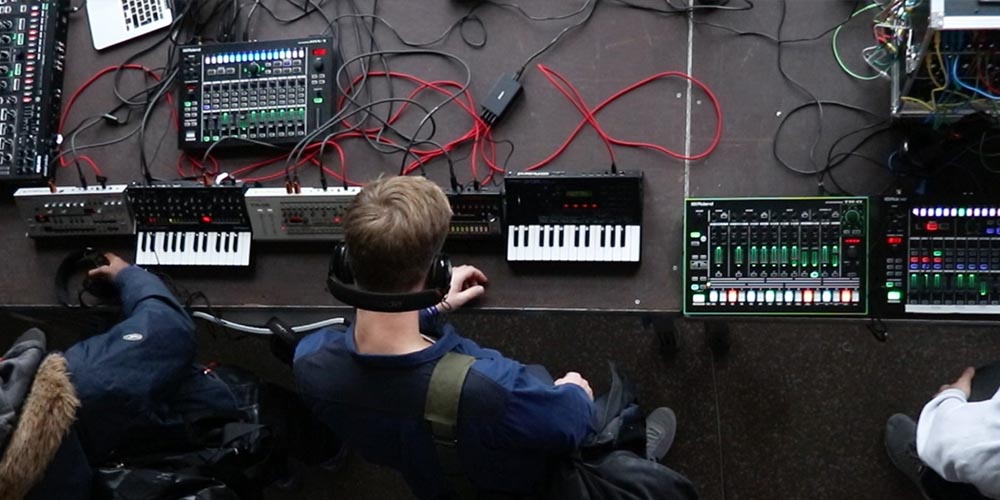 Some people look out of windows. Field recorders slam them shut and turn them into thundering kick drums.

That's at least what one massive metal window at Berlin's legendary Funkhaus broadcasting center sounded like to Alex Cowles on a gray and chilly afternoon in November.

"It made a big boom and was a really clean recording," said the Scottish producer, who makes atmospheric electronic music under the moniker Stillhead.

Cowles was demonstrating the beginnings of a track he had put together over the course of an afternoon solely with sounds gathered while attending Loop, a three-day gathering of music makers in the German capital. Organized by the music software company Ableton, the event attracts a diverse collection of artists, producers and educators from around the globe each year.

Amid all the performances, discussion and opportunities for collaboration, Shure partnered with Ninja Tune's Illum Sphere for a mobile recording workshop called "The Sounds Around You." Known for meticulously crafting sonic soundscapes, the English producer and DJ, whose real name is Ryan Hunn, started off by explaining his inspiration for field recording, from the audio pioneers of the musique concrète movement to the now defunct BBC Radiophonic Workshop.

Discussing everything from his creative process to the making of the original Star Wars lightsaber sound in the 1970s, the producer also shared with Cowles and around 30 other Loop participants how he first began gathering sounds for his own music.

"I had an old laptop I would carry around my apartment in Manchester to record audio," Hunn said. "I remember standing at the sink hitting teacups with a stick. I kinda miss those days. Everything seemed like art back then."

Soon after, he began recording while traveling, eventually incorporating sounds from a Japanese train station into one of his songs. "The real magic happens when something is spontaneous," he said. "You just gotta let it happen."

The producer stressed the impact field recording can make on an artist's music, especially someone primarily creating tracks in isolation at home or in a studio. "I'm a total convert. I now try to set aside one day a month to go somewhere I've never been to collect sounds," Hunn said. "It adds an extra layer of memory to the music."

He then played a video showing him hitting audio pay dirt at an English demolition derby. Hissing, hammering and pneumatic whining quickly became incorporated into a new song.


Field Recording in the Funkhaus

Then it was time for workshop participants to do their own field recording on the sprawling grounds of the Funkhaus complex.

Paul Crognale, Global Marketing Manager for Musician & Consumer Audio at Shure, gave each participant an MV88 digital stereo condenser microphone. Following a short introduction on how to use the mic with an iOS device, he said: "Now we want to send you out and see what you find."

This sparked a flurry of activity: While one guy immediately began experimenting with sliding the mic along the edge of the desk, others made for the door to hunt for unique sounds to record.

Just a few hours later they were all back together, eager to share their experiences. Cowles gamely agreed to present his raw track cobbled together from six samples gleaned from inside the walls of Funkhaus. The thundering kick drum, made from the slamming metal window, underpinned it all.

"It could be the start of something," he said, as the rest of the workshop participants nodded knowingly to the beat.

Shure received this contribution from the Milan-based sound designer Alberto de Angeli a few weeks after the workshop at Loop. He created this track from recordings made at the Funkhaus broadcasting center.

More of Alberto's music can be found here: aheadacheaday.com