The History of Moving-Coil Dynamic Microphones from the Shure Archives 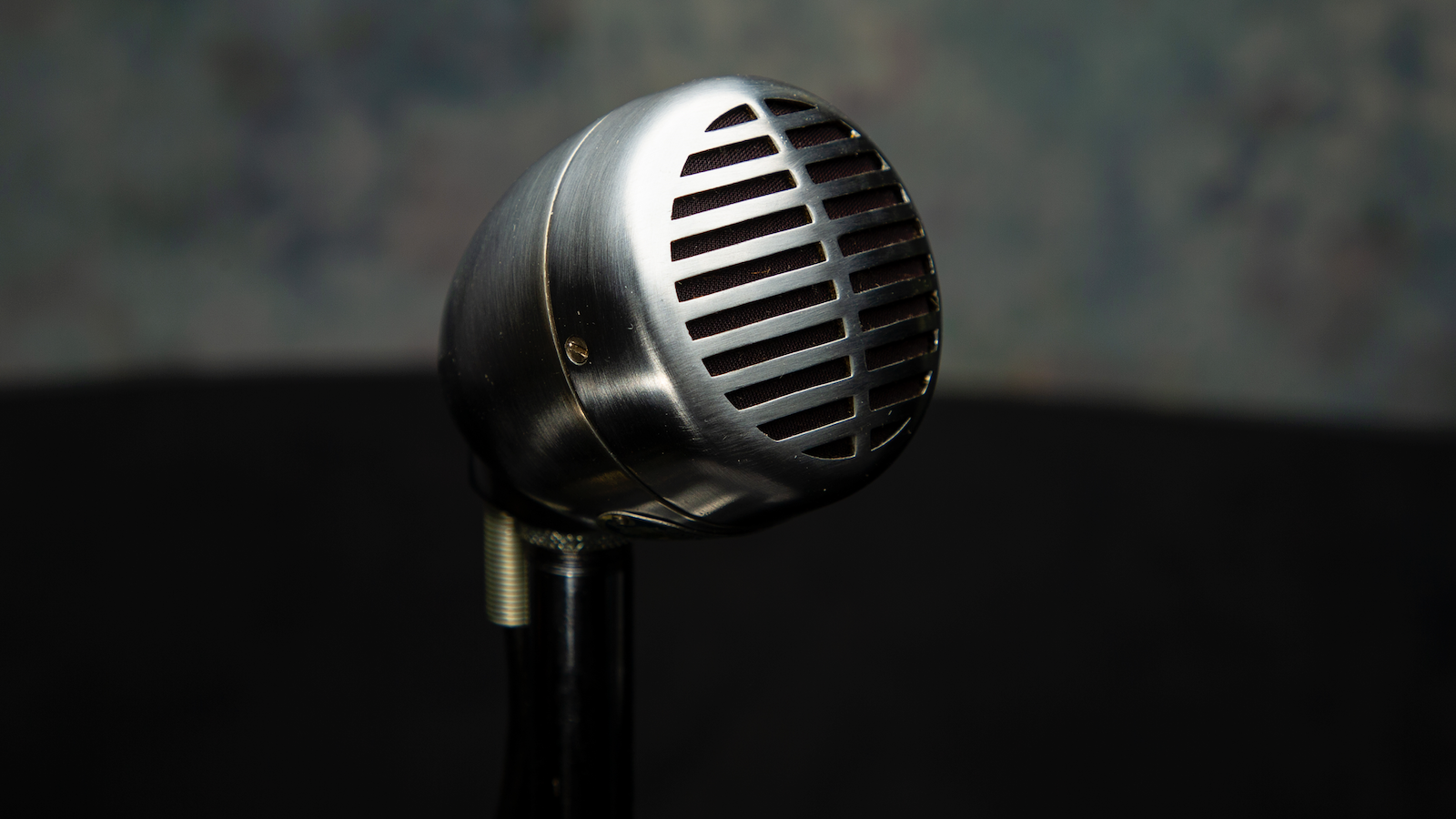 There are thousands of treasures to choose from in the Shure Archives and each has its own story. In this installment, Shure resident historian MICHAEL PETTERSEN explores the development of dynamic microphones using moving-coil technology that have dominated live sound since the 1940s.

An early patent, perhaps the first, for a moving-coil dynamic microphone is credited to German engineer and industrialist Ernst Werner von Siemens in 1877. In addition to founding what became the industrial giant Siemens, he is credited with a long list of breakthrough inventions that advanced electrical and communication technology.

Moving-coil technology was put to practical use in the 1920s when the Marconi-Sykes Company created the so-called Magnetophone for the British Broadcasting Corporation. In the United States, Bell Laboratory engineers A.L. Thuras and E.C. Wente used the technology in 1931 for the Western Electric Model 618A, which most historians agree is the first moving-coil microphone designed for the general public. The Model 630A ‘8-Ball’ followed in 1935.

‘Microphones Explained for Beginners’, a Radio-Craft magazine article, circa August 1938 described how the technology works:

“Moving-coil microphones employ a diaphragm/voice coil/magnet assembly which forms a miniature sound-driven electrical generator. Sound waves strike a thin plastic membrane (diaphragm) which vibrates in response. A small coil of wire (voice coil) is attached to the rear of the diaphragm and vibrates with it. The voice coil itself is surrounded by a magnetic field created by a small permanent magnet. It is the motion of the voice coil in this magnetic field which generates the electrical signal corresponding to the sound picked up by a dynamic microphone.”

Unlike the carbon microphones that were popular in the era, moving coil microphones did not require an external power supply. They offered good sound quality, rugged durability, and could handle extremely high sound pressure levels without distortion.

FUN FACT: There are two primary types of dynamic transducers – moving coil and moving conductor. Whereas the former is used in standard dynamic mics like the SM57 or SM7B, the latter is deployed with less common ribbon mics. Both have a permanent magnet and both are technically ‘dynamic’ microphones.

Shure entered an aggressive phase of product development with the hiring of chief engineer Ralph Glover in 1933 and acoustical development engineer Benjamin Baumzweiger (who later changed his name to Bauer) in 1937. One of Bauer’s objectives, among many others, was to create a unidirectional microphone using a single element.

In 1939, Shure introduced its first moving coil dynamic microphone: the ubiquitously famous Unidyne Model 55, along with the moving conductor Streamliner Model 5. The Unidyne was the world’s first single element moving coil microphone with a cardioid pattern; its price was $42.50 ($817 today). The semi-directional Streamliner, intended for public address, paging, and call systems, was comparatively value-priced at $22 (about $423 today). As Shure lore has it, freelance industrial designer Wesley Sharer was inspired by the grille of a 1937 Oldsmobile Coupe Six automobile when he came up with the Streamliner.

Since its debut in April 1939, the Unidyne microphone has never been out of production, even during the war years when much of the company’s manufacturing capability was dedicated to communication products for the Allied Forces. The diminutive Unidyne II Model 55S (S for small), known affectionately as the ‘Elvis Mic,’ is famous the world over. This microphone debuted in 1951 and remains a fixture in the Shure product line today.

For more information about Shure Unidyne microphones, check out their story here.

Moving-Coil Dynamic Mics and Artifacts in the Shure Archives

In addition to manufacturing microphones for the World War II effort, Shure undertook special projects for the US Armed Forces, including research on noise-reducing microphones, high-altitude headphones, and improved throat microphones. One of these projects was the manufacture of so-called pistonphones that were used for accurate in-field acoustical calibration and measurement.

In 1938, Glover and Bauer presented a paper at the Acoustical Society of America entitled, “A Moving Coil Pistonphone for Measurement of Sound Field Pressures.”  The driving mechanism of the Glover-Bauer pistonphone was a moving coil. Evidence in the Shure Archives confirms that Bauer’s explorations with moving coil elements date back to the year of his hiring in 1937. In 1939, Shure introduced the Unidyne I Model 55 moving coil microphone, based on Bauer’s work. Coincidence? Unlikely.

Today, the photo above and Bauer’s ASA paper are all that remain of the Shure Pistonphone that was manufactured for the war effort. Study that photo carefully. Produce one and claim this reward: a private tour of Shure Headquarters, including the archives, by the Shure Historian.

The 1939 Shure microphone catalog, in which the Model 55 debuted, made this bold statement: “Offers the most advanced, the most effective solution to sound pickup problems in public address, broadcasting and recording.”

History has validated those words. The Model 55 was the first moving coil microphone to employ Bauer’s ingenious ‘Uniphase’ principle. It is not hyperbole to state that since 1939, a Shure Unidyne I, II, or III has been the chosen microphone model at more important historical and entertainment events than any other microphone.

The Unidyne I has achieved a level of public recognition rarely attained by any product except perhaps the Coca-Cola™ bottle. The Model 55 and its descendants have been in front of celebrities, politicians, and entertainers for more than eight decades; present and photographed at historical events including Martin Luther King, Jr.’s ‘I Have A Dream’ speech, ‘Dewey Defeats Truman’ Chicago Tribune front page gaffe, Elvis Presley performing, Frank Sinatra during the Big Band era, Mahatma Gandhi giving a political address, the peace treaty signing after World War II on the battleship Missouri, and appearances in Star Wars.

The Unidyne I is indisputably iconic and has, in addition to its worldwide acclaim, a coveted place at the Museum of Modern Art in New York City as a prime example of 20th Century industrial design.

Described in the 1947 Shure catalog as “the ideal microphone for low-cost public address, recording, communications, and similar installations”, the Model 52 semi-directional moving coil model was one of only two dynamic mics that were not, at that time, a Unidyne. The other was the Model 51 Sonodyne. These microphones, described as semi-directional (somewhere between a unidirectional and an omnidirectional), were value-priced economy models that sold for about half the price of the Unidyne I Model 55.

Promotional copy touted the Econodyne’s satin chrome finish and case as “streamlined for improved acoustical performance and modern appearance.” Blues harp enthusiasts will doubtless notice a strong resemblance to the Model 520 microphone that made its debut in 1949 as a public address and communications microphone, eventually achieving acclaim as the ‘Green Bullet.’

Predating both the Model 52 and the Model 520, the Model 50 ‘Rocket’ moving conductor (ribbon) and Model 705A crystal models, offered to the public in 1939, were the first to use this case design. Why the case was used across several Shure microphone models is simple: Shure owned the tooling and different types of transducers fit easily in the case.

In the 21st Century

Moving-coil dynamic models remain the nucleus of the Shure performance wired mic line. The SM58, using a Unidyne III cartridge and introduced in 1966, continues its decades-long dominance of music stages worldwide. “How many SM58 mics are sold every year?” is a common question of visitors to Shure Headquarters. Though the quantity is a company secret, I will offer this: “It’s a very big number.”