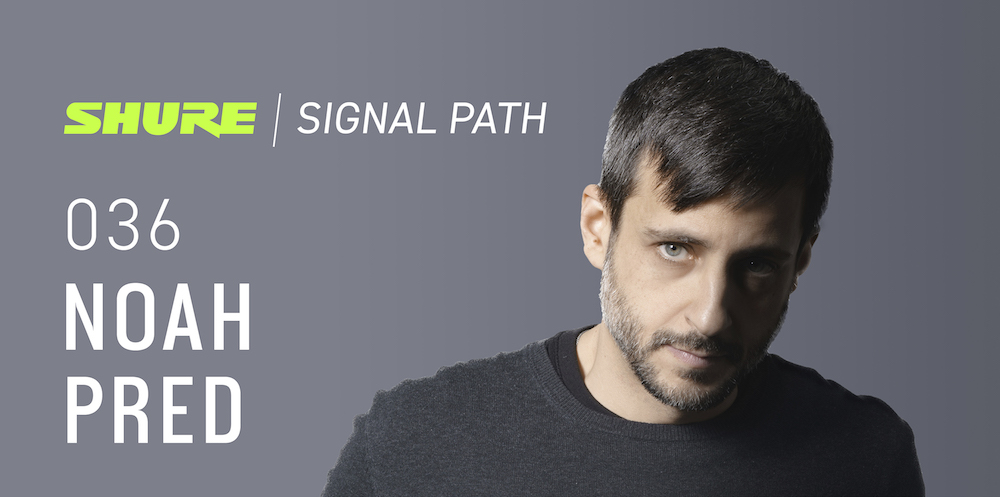 For the latest episode of Signal Path, Marc Young spoke with the Canadian producer and DJ Noah Pred as he was set to talk at Ableton’s now postponed Loop festival. However, his topic of keeping the creative flow going while in the studio seems more relevant than ever to these times of lockdown and quarantine. In the podcast, he discusses his early transition to electronic music, explains how he ended up becoming a music educator and offers his tips how to keep those creative juices flowing. The interview was recorded with two SM7B microphones.

Marc Young: Noah, thanks very much for speaking with me today.

Noah Pred: Yeah, thanks for having me.

You're a producer and a DJ, but also a music educator. We're recording this podcast just before your class at the big music school here in Berlin. What exactly will you be teaching your students today?

Today, we're really looking at some Max for Live stuff. You know, I sort of I never set out to become an instructor. It sort of happened by accident. When I was living in Toronto, words sort of got out that I was quite knowledgeable about Ableton Live in particular at the time. And people just started requesting, calling me for help or, you know, asking how to do this, how do I do that. And eventually it just sort of organically snowballed into a thing where a friend of mine who was running a music equipment shop in Toronto offered me the chance to do a workshop there, and I was quite hesitant at first. I was reluctant, but, you know, the requests kept coming in. And finally I said, You know what? Screw it. I'll give it a shot.

Might as well make some money if people are asking for help.

And it sort of snowballed from there. Yeah, I've been working closely with Ableton since around that time and after moving to Berlin it's been a great thing as an immigrant in a foreign country to have this opportunity to work with young artists and also, you know, keep myself afloat a little bit. It's been really rewarding. But so, yeah, today's class in particular is a little bit of drum synthesis and then and then some Max for Live stuff.

And how about your own musical education? That sounded very organic, how you became a teacher yourself. But what about your own education? You're now a successful producer and sound designer, but where did you start out? Growing up in Canada, as you just mentioned.

Well, you know, fairly typical piano lessons as a youngster. First piano recital. I remember playing the theme to the Pink Panther. And my brother was is a very talented, accomplished bass player. So I switched tack to guitar and bass at a pretty young age and started playing in bands.

How old were you?

Thirteen. I would say. And I was mostly playing bass, but a friend of mine had a Tascam four-track recorder that he wasn't really using and he loaned it to me and my brother had passed on his terrible old Roland drum machine, although I still have a fondness for the high-hats on that thing. And I'd somehow acquired a real Moog, which I wish I kept my hands on at a garage sale. This is like early 90s. Nobody really knew what was going on at the time or what price they might fetch for it if they'd hung onto it. And so every day coming up from school, I was just recording having a record like two or three new songs every day on the four track. It's that age where you’re just bursting with ideas, I guess. But, you know, aside from those early music lessons, no formal training. I never went to, you know, an audio engineering school or anything like that. Pretty much self-taught.

And when you say you're recording two or three tracks were you doing everything?

I was doing everything. So OK, I'm the drums. I was playing bass, guitar, doing some, you know, rudimentary howling that might…

I would say at the time it was kind of experimental, psychedelic indie rock, but some funk weirdness in there. I mean, that's the thing when you're doing two or three tracks every day and you're basically just making it for yourself. The whole point is to experiment and try different things. So unfortunately, all those recordings were thrown out at some point when I was living away and they were just in an unlabeled box and they're unfortunately lost to the ages. But sometimes I think about how fun it would be to hear them again. To pull back.

Listen to the full interview with Noah Pred and subscribe to Signal Path with the podcast provider of your choice below.