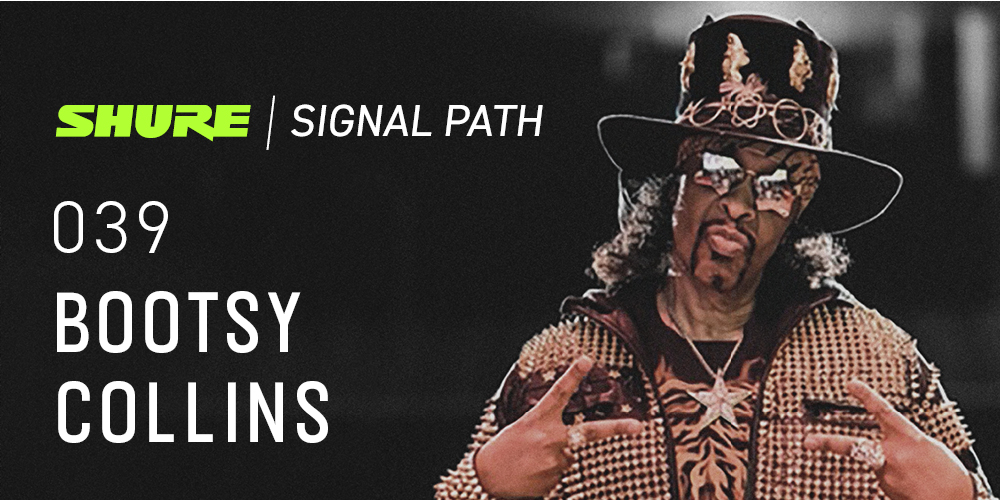 For the latest episode of Signal Path, Marc Young spoke with spoke with the funk legend Bootsy Collins. In the podcast, the star bass player discusses his new charity single for musicians facing tough times during the coronavirus crisis, his new album dropping this fall and what life lessons he learned from James Brown. This episode was recorded with the SM7B.

Marc Young: Mr. Bootsy Collins, it's an honor to speak with you today, sir.

Bootsy Collins: Oh man, I'm glad to still be around to kick it, you know?

We don't often get music royalty on the podcast. But I think it's safe to say if you had been born British, you'd have already been knighted by the Queen and we'd be calling you Sir Bootsy at this point in your long and storied career, right?

And that would be cool. Oh yeah.

And that career is really too massive to fit into just a single podcast episode: from the early days with James Brown, the groundbreaking time with Parliament Funkadelic, your successful solo years. That's all the stuff of legends at this point. But we're not actually here to talk about Bootsy, the legend. We want to talk about real-time Bootsy and what you're doing these days. And of course, future Bootsy.

Yeah, let's get into that.

You just recently released the song ‘Stars’ to support the MusiCares COVID-19 relief fund. Can you tell us a bit about that? (Click here to donate to Bootsy’s MusiCares campaign.)

Yeah. You know, musicians are like starving artist. It's like you come up with all this stuff, you’re creative and everything, but you're really the usually the last ones to get paid or even thought about getting paid. So, musicians really have a harder time than people really know. A lot of them do good music and great music, but a lot of times they never get paid for it. I've always been on that side of it because I was a starving musician as well.

So to come up through that and when COVID-19 hit, it's like that's kind of like the first thing I thought of is. You know, the musicians. People rely so much on music in in good times and bad times, but really in difficult times. Music is the source that they go to for a sense of healing. So I wanted to bring this back to the center of the universe where I came from. It's like, what can I do to help musicians at this point? Because we all lose and gigs festivals are being canceled. And, you know, I felt like, you know, we need to do something to try to help our situation. I thought of MusiCares, which they've always helped us, you know, in difficult times. I wanted to do something, a song or something that would benefit them and help them help us. And so we came up with a star is born. And that was pretty much the whole idea.

And can you tell us about what exactly the track is? All the proceeds from streaming or purchasing it all it all goes to this really powerful musician's music, right?

Listen to the full interview with Bootsy Collins and subscribe to Signal Path with the podcast provider of your choice below.