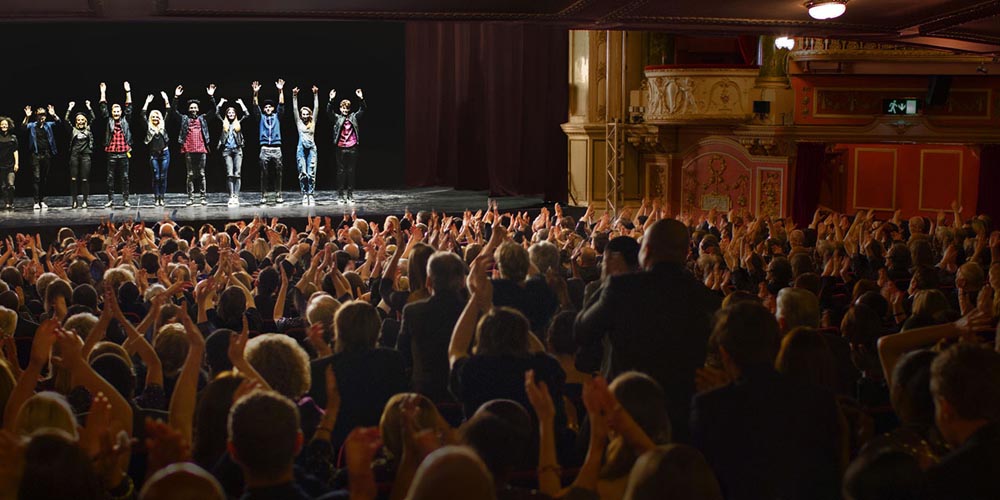 Gareth Owen is an acclaimed British sound designer whose portfolio includes many of the world's biggest musical theatre spectaculars, including 'Disney's Hunchback Of Notre Dame,'Sister Act', 'Hairspray', and 'Disney's Little Mermaid' to name just a few.

Impressively, Gareth also received the prestigious Olivier Award two years running for his Sound Design contributions on 'Memphis' and 'Merrily We Roll Along'. As many of our readers fall into the rock and roll sound engineer category, we caught up with Gareth to discuss how sound in the theatre world differs from the more widely understood world of live music.

How did you get started, and what drew you to sound design over other areas of the audio industry?

"One of my early ambitions was to be a lighting engineer. My father was a teacher and he looked after the lights at a local school; I have distinct memories of sitting behind an old lighting desk moving faders while he focused lights.

My parents advised against a career in lighting (wisely in hindsight), and suggested accountancy or medicine. Ignoring them, I embarked on a sound engineering career — initially in rock n' roll. As my experience grew, I realised that theatre was a much bigger technical challenge and that if I wanted to be truly the best sound engineer I could be, I needed to master the theatre art form. My break into theatre came when I was asked to cover sound on the Blues Brothers West-End musical at The Whitehall Theatre. I didn't have any money at the time, so I made friends with the band, purchased a tent, and lived in their garden for ten weeks while I mixed the show. Great memories, and the rest is history, as they say."

Theatre sound design is often misunderstood; could you explain a little about what's involved in producing a typical West-End show?

"As sound designer for a musical theatre show I take overall responsibility for everything the audience hears. Everything from how the vocals sound, how the orchestra sounds, what speakers to use, where to put the microphones, how the reverbs decay, and what sort of bird sound effect to use; the list goes on and on.

You've also got to have great people skills, being able to talk the same language as your crew, the musicians, the director and the cast. It's tough to think of another role in audio where you need such a broad skill set."

With that in mind, what's the most challenging thing about audio for theatre?

"In rock and roll, your client is on the stage. Often they have no idea what the FOH mix sounds like and get very limited exposure to it. In theatre, your clients are all sitting in the auditorium — the director, conductor, composer, orchestrator — all these people are out front and very much involved and forthcoming with their opinions. It keeps life interesting!"

What was the most rewarding show you've worked on, and why?

"I'd struggle to choose between Memphis in London and Disney's Hunchback of Notre Dame out in the US. For Memphis we had to work very closely with David Bryan of Bon Jovi fame who had very strong opinions on the musical he had written, really keeping us on our toes! For Hunchback we created a complete foley-esque soundscape in 3D which ran throughout the show; if that wasn't enough, we also had to deal with a 24 piece orchestra, 26 cast members, and a 40-strong choir — not to mention one of the most challenging scores ever written."

When presented with a new brief, how do you approach the sound design aspect?

"The first thing I do is talk to the director, composer and musicians. These guys have often been working on the show for years, and it would be arrogant to ignore their input. From them, I attempt to glean as much information as possible as to what the show should end up being like: Is it loud? Is it quiet? Will it be natural or amplified? Will it require lots of sound effects, flying cast members, etc?

I then spend time looking at the set design and try to work out how to get the speakers I need into the often limited space available. Finally, I talk to the production manager in an attempt to make the creative aspirations line up with the practicalities of budgets and schedule — often the most challenging part of the process! Once this is done, I talk to my team to make sure we are booking the best possible sound engineers to work on the show with us."

Part of your additional work includes the role of Treasurer for The Association of Sound Designs. Can you tell us a little more about your involvement with ASD?

"The ASD was born from a group of us sitting around a table bemoaning the lack of support for professional sound engineers working in British theatre. We figured if we could unite everyone under the same banner we could help each other, not only with training and technical support, but also with the business side of the industry.

One of the best things to come out of the ASD is, in my opinion, the social aspect - we now run ASD socials several times a year which bring many designers and engineers together who otherwise would never meet each other. This has, in my experience at least, been very beneficial."

How has technology helped you and your colleagues improve performances over the years?

"Digital desks have changed the sonic landscape beyond recognition over the last decade. These days it's not abnormal for your average musical to run to several hundred input channels and another hundred or so outputs. Back in the days of Cadac and Amek analogue desks, this kind of channel count would have been prohibitive. Computer-based playback systems have also significantly improved allowing ever more complex soundscape and backing track solutions that would previously require an entire room of reel-to-reel tape recorders!"