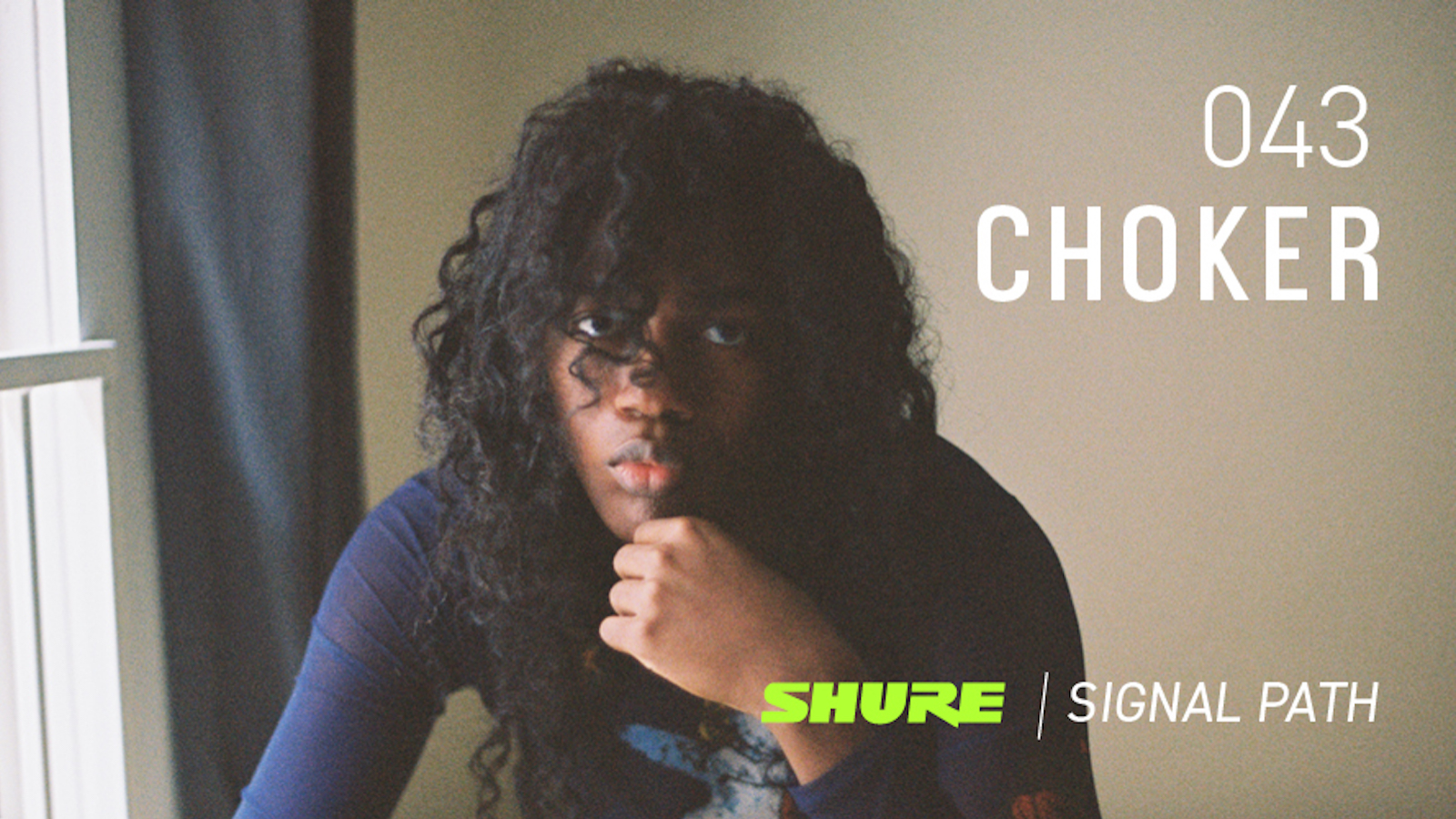 In a special Signal Path episode, Kieran Yates speaks with Choker, a singer and producer blurring the lines between R&B, hip-hop and indie music. Originally from Michigan, the artist also known as Chris Lloyd was nominated by Santigold to be an inaugural member of Shure24 – a platform celebrating audio culture innovators. In the podcast, Choker discusses growing up isolated in Detroit, his decision to commit himself completely to music and how moving to LA changed his sound.

Chris Lloyd only truly committed himself to music – learning piano, guitar and the fundamentals of production – at the age of 18. Singing came a year later. But by the time he’d turned 21, he’d delivered his debut album as Choker to critical acclaim in 2017.

Lloyd has since dropped a second record, relocated to Los Angeles and embedded himself in Southern California’s vibrant artistic community. It’s been a giant leap – both creatively and personally – from his childhood in Michigan.

Fortunately, he wasn’t so isolated when it came to music: besides exposure to local hip-hop heroes like Danny Brown and J Dilla, his brother turned him on to indie artists including Björk, Feist and Sufjan Stevens. So it comes as little surprise that he’s retained his eclectic tastes to this day.

But at some point after graduating from high school, Lloyd decided he wanted to make music rather than just listen to it. He began channeling his spare time into absorbing hours of YouTube tutorials on playing instruments and production. But he eventually realized he needed to dig deeper if he hoped to realize his artistic vision.

“The struggle that came early on was having something in my head, and all this music which I loved, and trying to make things sound like that immediately,” he says. “A lot of the time at the beginning was spent throwing stuff at a wall and seeing what sticks.”

While most would consider such a late start to the craft a significant challenge, Lloyd saw it as an advantage.

“I think I’d gone through the process of figuring out what I really wanted to do. If you start playing piano when you’re three, it’s just your parents telling you to do something. I played sports when I was younger, but by the time I was 18, I was spending all of my free time making things. So I think all of my experiences leading up to that point kind of helped contribute to the speed in which I picked things up.”

As if learning two instruments in a short time wasn’t impressive enough, Lloyd’s debut Peak was also his first foray into the process of recording, mixing and mastering, all of which he did himself.

“I’d never done mixing or mastering before, so that process involved a lot of experimentation, a lot of research and reading,” he says.

“I really liked their music from an emotional standpoint, but I started listening to it more technically, trying to understand the makeup of the song and the mix. Hearing the punchiness of the drums and trying to figure out how to make my drums feel as visceral in my chest and give me those feelings that I like when I am listening to music. I learned that you can really do everything yourself, as long as you have a clear idea of what it is you want to do, and you are very set on executing those ideas.”

From his wholly experimental approach on Peak, Lloyd evolved his approach when creating his follow-up, 2018’s Honeybloom, collaborating with other producers, gleaning vital production knowledge and expertise to hone his loose, modern R&B sound. Finding a home in LA, Lloyd stepped further into his artistic evolution – a huge shift that led to internal transformation, and a series of new singles.

“I think I’d learned to be more open and less scared and hard on myself. It was the first music I made after moving to Los Angeles and I just really wanted to put it out,” he says. “It wasn’t supposed to be a grand artistic statement, just a very up-to-date version of me.”

With a rapturous crowd devouring his recent performance at the future-forward Camp Flog Gnaw festival, the latest Choker version looks set to have a longer shelf life. That is, until Lloyd decides to evolve yet again.