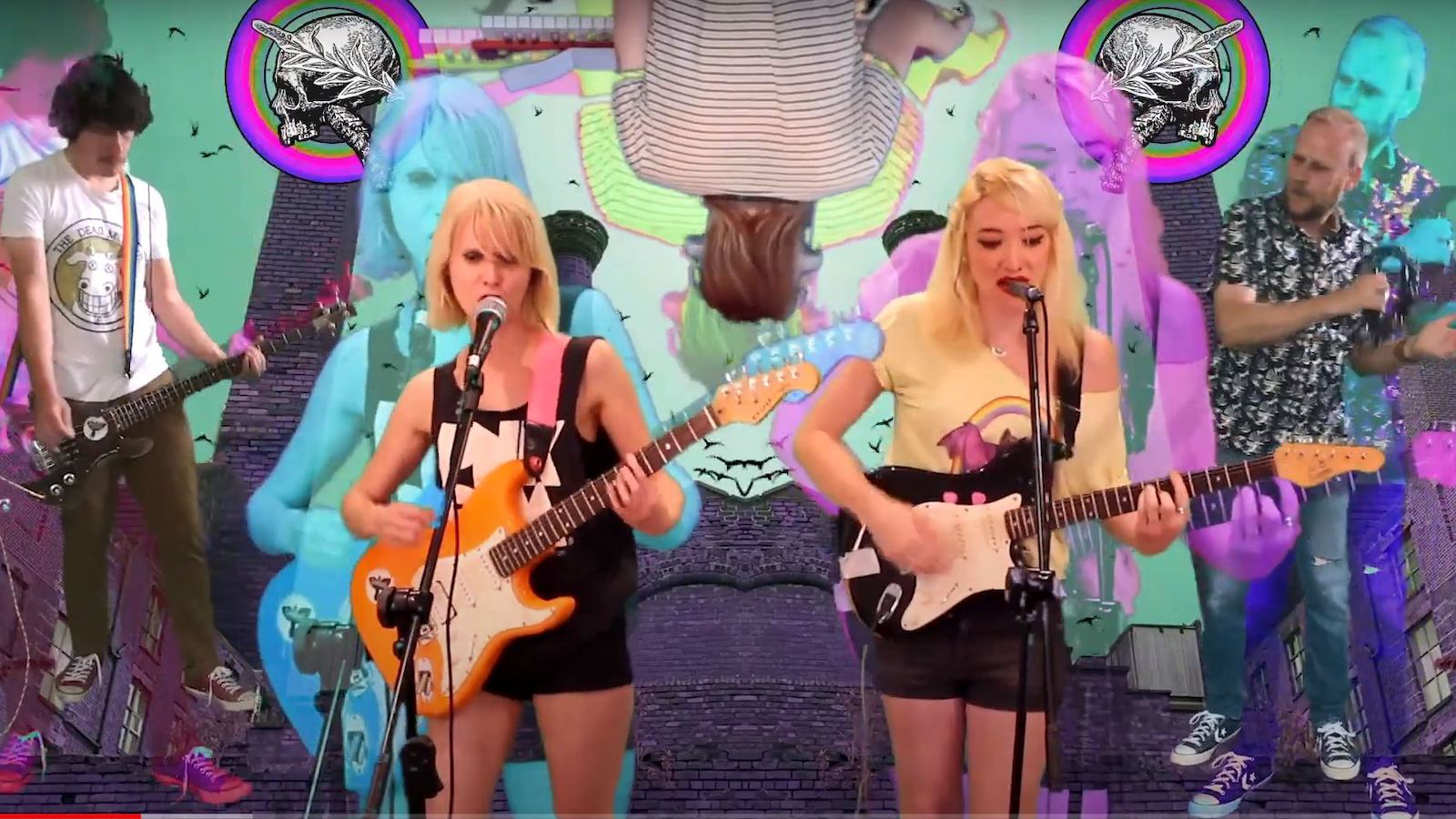 What makes a livestream music event great and what do you need to make one happen? LOUDER spoke with people who’ve found success taking the party online.

Music fans have an inbuilt urge to come together and party. So when lockdown hit last year it only took a few days for virtual festivals, concerts and club nights to spring up all over the internet. Some were a huge, with thousands of revelers, others small and intimate affairs for a few friends on a single Zoom call.

But what makes the perfect virtual party – and can they ever hold an upraised lighter to the real thing?

To find out, I spoke with three people who have taken their events online over the past year: Ian Watson, founder of London club night How Does It Feel To Be Loved?; Slovenly Records owner Pete Menchetti, who has taken part in two digital festivals and since co-founded online TV channel The Rock & Roll Broadcasting Service; and Beck Conway from Indietracks, a UK festival which raises money for conservation causes.

The first thing I wanted to know was this: why did they decide to go online, rather than waiting until venues reopened? For Ian Watson, it was more of a happy accident than a considered strategy.

“In March (2020) all club nights were cancelled, so I thought I’d put together a six-hour mix of songs I might have played and upload it to Mixcloud,” he says. “But then I found out about a streaming service called Mixlr, which allows everyone to hear the stream at the same time, so I uploaded a stream that could be played at any time on Mixcloud and had a live stream on Mixlr, which also has a chat facility.

“Then one of our regulars started a How Does It Feel To Be Locked Down? Facebook group and set up a Zoom party for the night – I’d never heard of Zoom at that point.”

It’s a similar story for Menchetti. Someone asked if his bands would like to take part in an online festival on Memorial Day. He said yes, without entirely understanding what he was getting into.

“None of us at Slovenly had any idea how this streaming stuff worked,” he recalls. “Luckily they – the guys from online concert platform SofaKing – are wizards. We couldn't have done it without them.”

As for Indietracks, the idea of going online came up as soon as COVID canceled the festival, but it was seeing the success of others that encouraged them to dive into digital.

“In the early days of lockdown I loved the weekly streamed shows from Specialist Subject Records,” says Conway. “I was really struck by how the community aspects of live shows that I love, like bumping into lots of familiar faces, were still there. Indietracks as a festival is very focused around the community of bands and fans who come along, so those early experiments gave us confidence that it would work.”

All of them have had big successes with their events: How Does It Feel to be Loved? regularly pulls in over 1,000 online partygoers, and has had guest DJ sets from the likes of John Dywer from Thee Oh Sees and Jim Reid of The Jesus and Mary Chain; Menchetti has seen his bands earn thousands of dollars in tips from online concerts, while he himself has DJ’d for big online audiences; and Indietracks At Home featured 30+ bands, raising over £5,000 for charity.

The reason for their success? Because they’ve all adapted their usual offer to fit the limitations – and advantages – of an online format.

“That first virtual dance party was incredible,” remembers Watson. “We had about 1,000 people tuning in across Mixcloud, Mixlr and Zoom. Seeing people on Zoom dancing, chatting and generally messing around like you would at a normal club night was really emotional; I had no idea that I’d feel so connected to the people who were there.

“The more people got used to being on Zoom, the more they were able to just drop their guard and be themselves. One group of housemates turned their basement into a pub, with a bar and lights, while others dressed up, got in disco lights, and danced like they were back in the real world…the best club nights run on friendly chaos, and the virtual nights managed to capture this brilliantly.”

Menchetti concurs: “It’s important to have dancers on screen. And if you're going to show the DJs, show the records and their decks more than the DJs themselves. For bands, we’ve found that an action-packed show that lasts half an hour is probably a better idea than a longer event.”

He adds that for live sets with bands, it is good to have some pre-recorded material in advance that can be dropped in, just in case you lose a connection.

As for the quality of what the bands offer, both a hi-tech and low-fi approaches can work, says Conway: “It was really interesting seeing how different bands interpreted our brief – we had everything from webcam performances at home through to full-band live shows with lots of post-production.”

She adds that as well as being able to see each other, the audience also needs a way to message one another: “Lots of social media activity and opportunities for interaction are essential. We made sure that we posted across all of our channels regularly throughout the festival and had Zoom rooms for the club nights each evening so people could chat with each other.”

Which brings us on to logistics – what do you need to run an online party? All of our party architects agreed that a mix of streaming and pre-recorded is helpful: firstly, because it cuts down on the number of things that can go wrong, and secondly because it means people can take part even if they have a bad internet connection or a schedule conflict.

“We’re a charity festival so we had to come up with zero cost and low-tech solutions that weren’t very labor intensive,” says Conway. “We decided to use YouTube instead of live streaming for the bands so we didn’t need tech support on standby each day. But then we livestreamed a club night every evening with a combination of Mixcloud/Mixlr. I’d also recommend testing everything thoroughly in advance!”

For Conway’s club night sets he spent hours preparing his mixes in advance, explaining that audio quality is just as important in an online environment as it is in the real world.

“You can’t just chuck a Fall song next to a song by Love and hope that they match up in terms of volume – that takes a lot of tweaking and adjusting. There are easy to use programs like Audio Joiner that do this for you, but it never feels as zippy or precise as a properly edited mix. So I edit the songs together in Garageband, which also allows me to pick exactly where in a song I want to drop in, as I would when I’m DJing live.”

And, as with so many things in life, sometimes it’s just a case of trial and error, adds Menchetti: “After that first festival we did another thing with Goner Records called Fifth of July and it was 10 times better. Now we’ve co-launched the Rock & Roll Broadcasting Service, a non-profit TV & radio station, and that’s ten times better again. The launch party for that was pretty cool, with an all-star list of guests including an interview with Dave Davies of the Kinks!

“So yes, the learning curve is really steep, but just stay confident – it will work out.”

Back to the Future

Conway is hopeful that Indietracks will take place in its usual format at some point, but both Menchetti and Watson see streaming parties as a big part of their future output.

“We wouldn't have invested as much time into it if we didn't see value in livestreaming post-COVID,” notes Menchetti. “There are a lot of people out there who would like to attend shows by our bands but aren't able to, lockdown or not. Maybe they have children, or are injured, or live far from anyplace our bands will be performing. I think live streaming can be really beneficial to both our bands and our audience, even when things return to 'normal'.”

In a similar vein, Watson has found that his live events have grown an entire community, one that stands apart from his usual in-person club nights.

“In much the same way that a family of regulars has grown around the club night over the last 18 years, a family of virtual attendees has formed over the last six months, with familiar faces tuning in from North America, South America, Australia and all over Europe. So it would feel weird and wrong to suddenly abandon these new friends as soon as clubs are back up and running.”