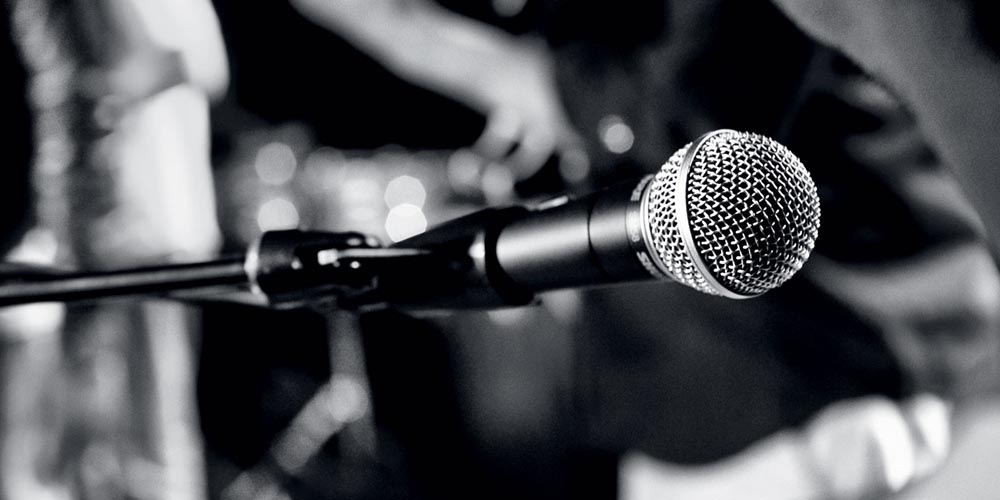 As briefly described in our post on microphone basics, mic directionality can be classified as three distinct types: omnidirectional, unidirectional, and bi-directional. Within these categories, there are a number of different directional patterns plotted in graphs known as polar-patterns; the most commonly known types are cardioid and supercardioid. For a large number of common applications, these 2 guys will get you pretty far - but what if your requirements are a little more specific?

The various advantages and disadvantages of these polar patterns are well documented, but some of the lesser known varieties are often misunderstood. In this post, you will learn about a couple of the more obscure options available to you as an engineer and some of the applications they're suitable for.

This increased focus is especially beneficial when operating in very loud stage environments where unwanted sound bleeding back into the mic can be a real headache. Controlling bleed is imperative on a loud stage; because, if left unchecked, it can result in a washy, unfocused sound - or even worse, feedback. When used correctly, a hypercardioid mic is your best defence against troublesome stage noise thanks to superior off-axis rejection.

There are, however, a few points to be aware of:

1) Because hypercardioid mics are so directional, they require very precise mic technique - even more so than supercardioid. If a singer moves off-axis, the performance of the mic will change, and this can adversely affect the sound quality. In other words, your singer had better keep that mic pointed at their mouth!

2) As is the case with supercardioid mics, a tighter directional response on the front of the mic has an impact on the microphones sensitivity to sound arriving from behind. While a cardioid polar pattern is least sensitive at the rear (180 degrees off-axis), a supercardioid mic is least sensitive at 125 degrees and the hypercardioid at 110 degrees; you will need to take this into consideration when placing stage wedges.

Also, the amount of sensitivity from the rear of a hypercardioid mic is greater than that of a supercardioid - meaning you need to take extra care of any sound coming from directly in front of the singer or sound-source.

3) On many hypercardioid mics, there's a concern about there being too much proximity effect. While this is the case for many microphones on the market, Shure's KSM9 cartridge uses a dual diaphragm element, which helps keep the proximity effect under control.

Sometimes referred to as 'wide cardioid', subcardioid is a rather obscure polar-pattern. Their directionality is actually quite close to omni – but not quite – resulting in a very natural, open sound suitable for performances with low stage volume where a more organic sound is desirable. Subcardioid polar patterns are also much less prone to the proximity effect - particularly when combined with a dual diaphragm element such as the KSM9 described above. They are, however, more susceptible to feedback - think low-volume, small acoustic gigs when considering a subcardioid.

A Mic of Two Halfs

When compared side-by-side hypercardioid and subcardioid polar patterns are chalk and cheese. We have one that's perfect for loud stage environments, and another that's better suited to quiet conditions. Combine them together, and you've got a pretty versatile mic on your hands.

The KSM9HS is a multi-pattern condenser microphone that can switch between hypercardioid and subcardioid at the flick of a switch.

In hypercardioid mode, the KSM9HS delivers the sensitivity and frequency response of a condenser microphone with a greatly reduced risk of feedback. Even when using in-ear monitors to cut feedback risk, the KSM9 can still help to deliver a cleaner, better-sounding mix by rejecting unwanted bleed.

In subcardioid mode, the KSM9HS takes on a studio mic quality, which is made possible by the lower stage volume and reduced risk of feedback. A subcardioid mics minimal reduction in sensitivity from the rear delivers just enough reduction to control feedback at a low-volume gig, while allowing you to benefit from the natural tone that comes with a less directional mic and next to no proximity effect.

So there you have it; two different polar patterns demonstrating a world outside of omni and cardioid. And, you can even put them into practice using a single mic.

Have you used the above polar patterns to improve sound quality or even save your reputation as an engineer? Drop us a note in the comments - we like stories!