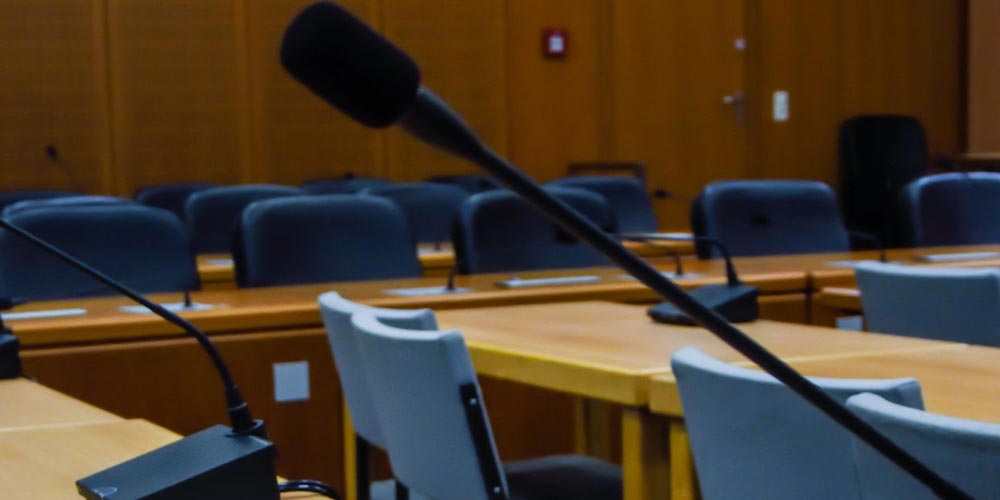 The Frankfurt Regional Law Courts, a complex containing local, regional  and higher regional courts as well as facilities for public prosecutors,  has upgraded its audio-visual discussion and conferencing system in its  two main courtrooms to a new, entirely digital system based on a Shure  DIS DCS 6000 conferencing system and the QSC Q-Sys audio processing and  management platform.

The AV systems in the two  main court chambers at the Frankfurt Regional Law Courts were decades  old and in need of being brought up to date, particularly with respect  to security. As part of the refurbishment, the authorities decided that  the discussion and conferencing systems needed to be replaced, but it  was important to find a solution that would fit into the existing  furniture in the courtrooms, so as to cause the minimum of disruption.

The integrator who undertook the planning and installation of the  replacement system on behalf of the Hessian State Authorities, Hellwig  Sound Systems of Bensheim, chose a completely digital solution  comprising a Shure DIS DCS 6000 discussion and conferencing system,  while audio routing, processing and management throughout the courtrooms  is now taken care of by a QSC Q-Sys platform.

Each seat in the courtroom was given its own DCS CU-6105 central  processing unit, personal loudspeaker and control panel with on/off  switch, fed by newly installed Cat 7 connections, to make each seat  individually addressable. To this end, each courtroom now contains three  RP-6004 network splitters to provide all the necessary network  connections.

The team from Hellwig Sound Systems had to first dismantle the old  discussion system and construct new custom-made panels that exactly  fitted the cavities left in the furniture by the older system. Beneath  these custom panels, a total of 86 MU-6040D DCS interfaces were built  in, each with its own GM-6524 gooseneck cardioid microphone.

The courtroom desks used by the judge, legal assessors and court  security officers were reconstructed slightly differently, with larger  custom-made panels designed to incorporate the extra functions required  by each of these important court personnel — including the ability to  control the lighting and in-court projection screens, to call witnesses  over the PA and to activate 'Court In Session/Not In Session' and  'Public/Closed Session' indicators outside. Judges also have the ability  to override all other inputs and interrupt all discussion from their  control panels when required.

Audio passes from the DCS 6000 system via QSC IO-22 interfaces into  the Core 250i Q-Sys central processor, which manages the networked audio  streams from both main courtrooms. Q-Sys controls various functions at  the courts, including the sounding of court session chimes throughout  the building, the red/green status LEDs on each GM-6524 microphone and  the transmission of witness calls to the PA system. In the courtrooms,  the sound reinforcement is now taken care of partly by the old ceiling  speakers from the original system, and partly by new QSC AD-S52T  installation speakers added by the team from Hellwig Sound Systems to  the public viewing gallery. Further speakers in the halls of the  building facilitate the calling of witnesses to the court. The  loudspeakers are now all powered by three QSC ISA 300 Ti amplifiers,  which allow differentiated control over up to five different loudspeaker  zones.

The increased flexibility introduced by the DCS discussion system and  the Q-Sys audio management platform means that small groups of seats,  in different courtrooms if required, can now be patched together and  into discussions of different sizes, without all of the seats needing to  be active at once. Seating in the newly refurbished courtrooms can also  be moved in and out of the courtrooms, depending on the size of the  trials taking place; new benches can be added or removed by plugging  them in or disconnecting them from the network. If participants change  seats during the discussion, their new seating position can also be  incorporated into the active discussion group without any difficulty,  whether they are in the original courtroom or have moved to the other  for any reason. Peter Willmann, from Hellwig Sound Systems, sums up the  benefits thus: "The system is easy to use, and makes it very simple to  change signal routing when individual seating arrangements in the  courtrooms need to be reorganized. In addition, the whole system is  extremely resistant to failure."